English
Deutsch
中文
Русский
Español
العربية
Polski
Tiếng Việt
Portuguese
REAL TIME NEWS
Loading...
USD Recovery Continues The recovery in the US Dollar is continuing this week, albeit at a slower pace. With risk sentiment souring slightly in the fa...
Oil Traders Cut Longs The latest CFTC COT institutional positioning report shows that crude oil traders cut their net long positions by 19133 contra...
Daily Market Outlook, January 28, 2021 The US Federal Reserve left policy unchanged yesterday, as widely expected. Chairman Powell continued to push ...
Good day, The price of the Russian ruble tested the 76.00 resistance level, signifying the potential reversal and pullback to the broken downtrend an...
US consumer confidence ticked higher in January, but details of the Conference Board report showed persistent concerns of households about job opportu...
Chart of The Day S&P500 S&P500 Probable Price Path & Potential Reversal Zone Global risk sentiments stalled ahead of the FOMC meeting even as the IMF...
Will They Won’t They? The US Federal Reserve meets for its first FOMC review of 2021 today. There has been a great deal of speculation ahead of the me...
Daily Market Outlook, January 27, 2021 Asian equity markets are mixed this morning. The US Senate voted to go ahead with former President Trump’s imp...
Concerns Over Japanese Economy Concerns over the health of the Japanese economy continue to grow as the country steps up its battle against the ongoin...
Chart of The Day EURUSD EURUSD Probable Price Path & Potential Reversal Zone EUR Italian Prime Minister Conte will resign today in order to obtain th...
Daily Market Outlook, January 26, 2021 Asian equity markets are down this morning reflecting concerns about whether President Biden’s fiscal stimulus...
UK Economy Worsening The pressure on the Bank of England ahead of its next policy meeting on February 4th is growing. The latest economic data for the...
US 10-year Treasury yield maintains fragile balance on Tuesday after posting biggest decline in several weeks on Monday. The fall from 1.10% to 1.02% ...
Markets Still Grappling With Stimulus Expectations & COVID Fears It's been a fairly muted start to the week for equities traders. However, most indice...
USDCHF Probable Price Path & Potential Reversal Zone USD US President Biden signed an executive order to revoke the cornerstone oil pipeline project ...
Asian equity markets climbed to the levels close to all-time highs on Monday amid expectations that growth in Asian economies will continue to outpace...
In this Weekly Market Outlook 25-01-21, our analyst looks into the trading week ahead, possible market moving data releases across the globe and the t...
Gold Gold prices have started the week under a little selling pressure here with equities remaining near recent highs despite the heavier tone to week...
RBC Capital Markets Week ahead: This week features the FOMC meeting (see USD) and the WEF. In terms of the economic data schedule, fourth quarter GDP...
Good day, Russian ruble has pulled from the 72.70 supporting level. The asset might soon face resistance at the 76.00 level. We feel that Russian rub...
Fund Analysis Market Insight Tech Analysis The IndeX Files

The fundamental backdrop for equities remains supportive in the near term though benchmarks in the US, Europe, Asia and the UK have seen a pause in momentum so far this week.

The announcement of a new range of easing measures from the ECB at its meeting this month has helped keep European equities well bid. The central bank announced a cut to the deposit rate along with the restarting of QE. While the measures underwhelmed some elements in the market, creating a counter-intuitive bullish move in EUR, the DAX has seen steady buying.

The latest developments in the Brexit space have given a positive contribution also as it now looks unlikely that the UK PM will be able to push ahead with a forced no-deal Brexit. Following the passing of the Benn Bill last week, UK parliament can now require the PM to officially request an extension to the Article 50 process should it be unable to approve a deal (or agree to exit without a deal) by October 19th. While the reduced risk of a no-deal Brexit has created upward pressure in GBP, UK asset prices have also appreciated as investors welcome the further postponing of a potential economic cliff.

Traders are readying themselves for a further easing announcement from the Fed this week with the market expecting another 25 basis point cut. Recent US data points have highlighted remaining weakness and while there have been improvements in the expectations for a positive outcome to trade negotiations between the US and China, uncertainty and risks remain.

Volatile moves in WTI this week have been largely responsible for creating a pause in equities . A drone attack on Saudi Oil sites at the weekend resulted in a 20% jump higher in WTI on Sunday evening. Despite some initial pull-back following the move, WTI is now higher once again as the risk of military conflict between the US and Iran has grown.

From a technical and trading perspective. On a wider scale, Index continues to range between the yearly pivot between the 11490 level and the year R1 at 12689. In the near term, indicators support further upside with bias towards an eventual break of the R1 and a push higher. If the index suffers losses from here, I will be monitoring any retest of the 11822 support for bullish reversal candles to initiate long positions. 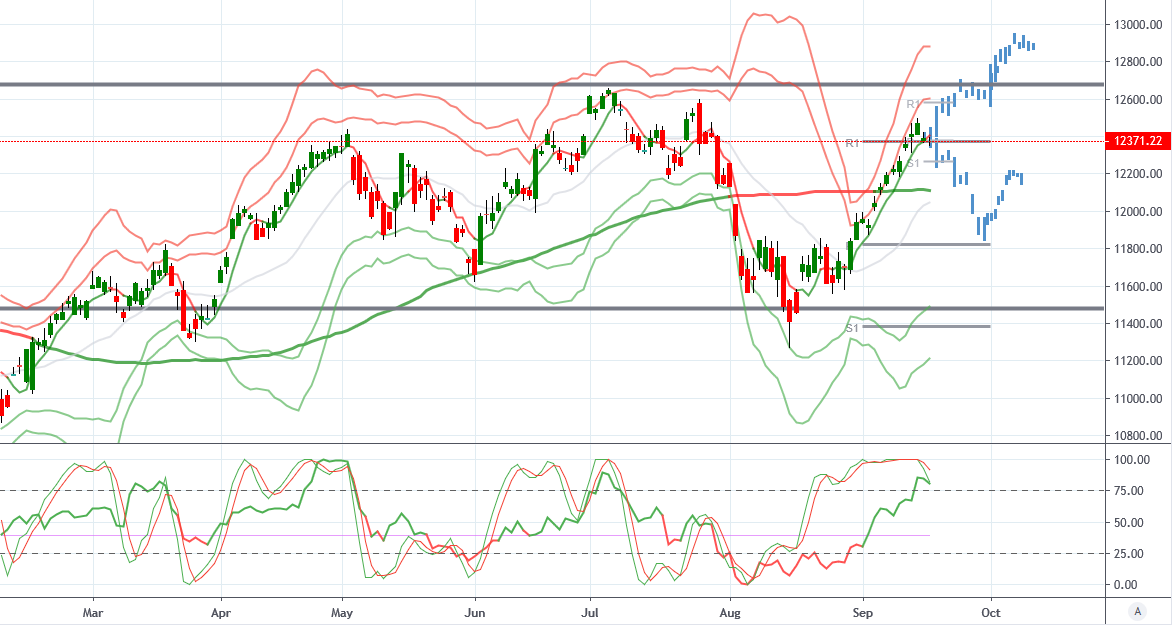 From a technical and trading perspective. The index has made solid gains recently taking the market back to just below all-time highs. I will be looking to use a break and retest of the monthly R1 level to set fresh longs. On the other hand, momentum indicators raise the risk of a short term pullback in which case I will be monitoring support at the 2906 level for long opportunities. 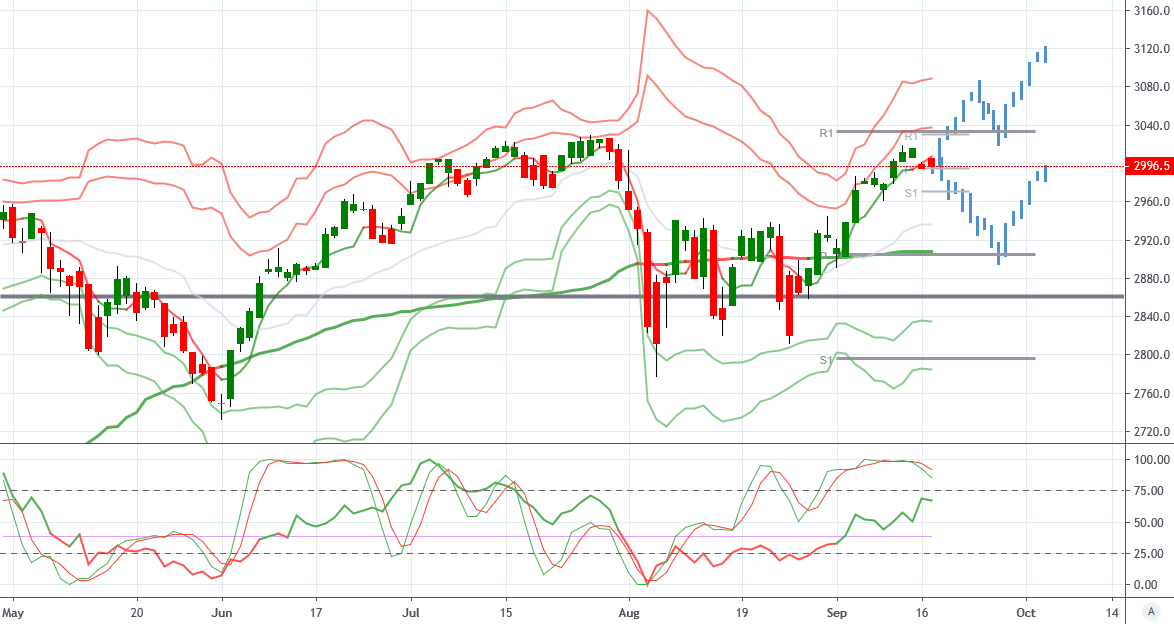 From a technical and trading perspective. FTSE finds itself in the middle of the range between the yearly Pivot (7056) and yearly R1 (7577). VWAP continues to support a push higher to test offers into the 7577 level, for an eventual break. However, given the uncertainty in the backdrop, a pullback into the 7056 cannot be ruled out which I will be watching as a test of this base should offer long opportunities. 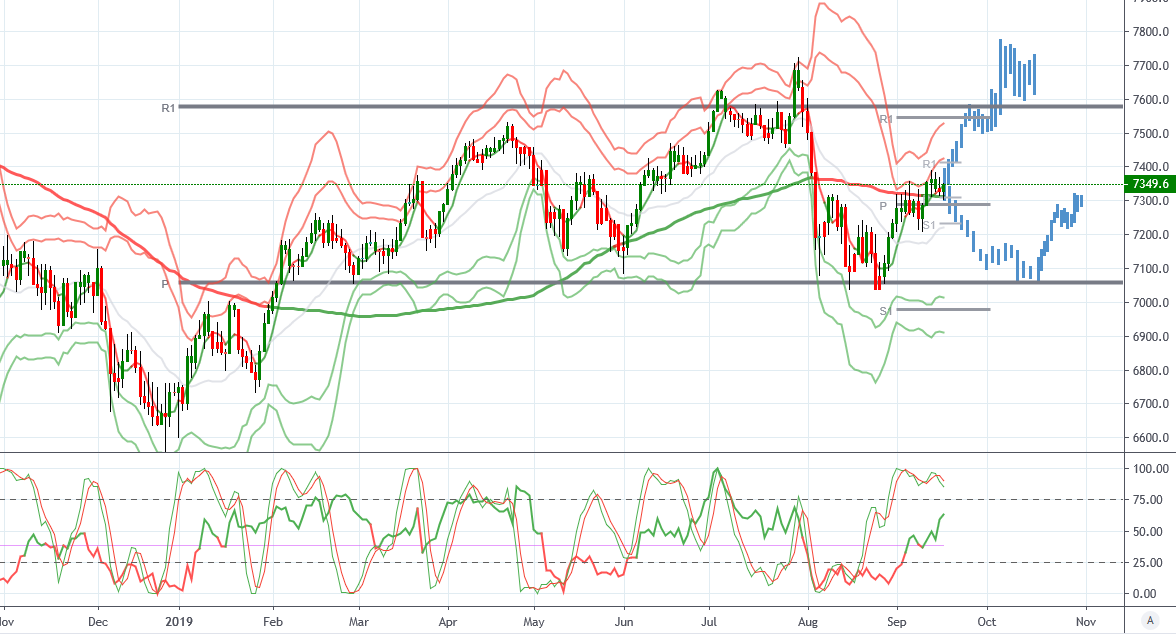 From a technical and trade perspective. The Nikkei is once again testing the medium-range bearish trend line. If selling pressure creates a pullback here I will be watching for bullish reversal candles between 21545 and 21173 for longs targeting an eventual break above the trend line. Should any pullback run deeper than 21173, we are likely to see some ranging play around the yearly pivot. 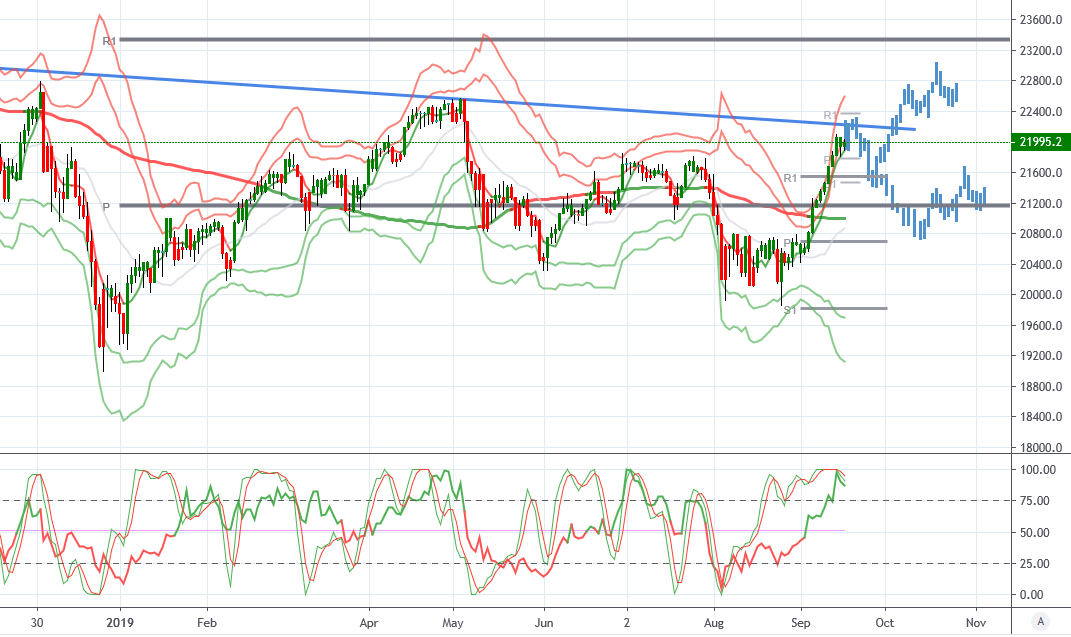 Tagged in: #brexit, #dax, #ecb, #fed, #ftse100, #monetary_policy, #sp500, #wti
Written by Patrick Munnelly
Patrick has been involved in the financial markets for well over a decade as a self-educated professional trader and money manager. Flitting between the roles of market commentator, analyst and mentor, Patrick has improved the technical skills and psychological stance of literally hundreds of traders – coaching them to become savvy market operators!
Previous Post

How the Oil Shock Affected Expectations of the Fed’s September Rate Cut?

What Does Seasonality Tell Us About Equity Markets Growth in February?

How Will The Fomc Impact Usd?

Boj Concerned For Japanese Fiscal Health But Not Financing Govt.

Chart of The Day Eurusd