English
Deutsch
中文
Русский
Español
العربية
Polski
Tiếng Việt
Portuguese
REAL TIME NEWS
Loading...
Bitcoin Bites The Dust Well, first thing’s first, if you got in on the Bitcoin sell-off this week, congratulations! To all the anti-crypto bunch who...
Weekly Live Market & Trade Analysis In this week's live market and trade analysis session, we assessed the technical price patterns of over 20 charts ...
It’s been an interesting week for the US Dollar, which has managed to claw its way back into positive territory, as of writing. The greenback started ...
Daily Market Outlook, February 26, 2021 Asian equity markets are sharply lower this morning after a big decline on Wall Street yesterday. Concerns ab...
Oil prices continued to rise on Thursday with Brent breaking $67/bbl, returning to the level where it traded in January 2020. Powell's speech this wee...
Upside Positioning Increases The latest CFTC COT institutional positioning report showed that WTI traders increased their long positions last week b...
DXY Turns Lower Following a brief recovery last week, which ultimately failed, the US Dollar has come back under heavy selling pressure this week. T...
Daily Market Outlook, February 25, 2021 Asian equity markets recovered following the stronger performance on Wall Street, partly helped by reassuring...
Good day, The S&P500 has pulled from the 3862.00 level. The asset is currently approaching the historical maximum of 3959.00 and has the potential to...
NZD Soars The New Zealand Dollar has broken out to its highest levels since April 2018 this week. Benefitting from the broad recovery in risk appetit...
Powell Testifies US equities were shunted lower yesterday in response to comments made by chairman of the Federal Reserve, Jerome Powell. Testifying...
A downward correction in the crude oil market, after recovery of output and refinery operations on the Gulf Coast, was short-lived. Brent quotes rose ...
Powell to Testify Today Fed chairman Jerome Powell will be in the spotlight when he testifies before the Senate Banking Committee later today. The Fe...
US Inflation Expectations Cap S&P Rally Global equities benchmarks are broadly rebounding against recent losses over the European morning on Tuesday....
A key trading theme on Monday has been renewed rise in market risk-free interest rates in the US. The yield on 10-year Treasury bond after short conso...
RBC Capital Markets Week ahead: Central bank communication dominates the week, with Fed Chair Powell's Congressional testimony (Tuesday & Wednesday)...
Gold Gold prices fell to their lowest level since July last week amidst an uptick in US inflation expectations. An unexpectedly strong January US Re...
In this Weekly Market Outlook 22-02-21, our analyst looks into the trading week ahead, possible market moving data releases across the globe and the t...
Daily Market Outlook, February 22, 2021 Market risk sentiment has started the week on a cautious note, with equities across the Asia-Pacific region s...
Good day, The price of gold has closed with a doji last Friday, facing a very strong support at the level of 1767.00. Hence, there is a potential tha...
Fund Analysis

The minutes of April ECB meeting, released on May 22, revealed that the Central bank is eager to deliver more. “Minutes” are worthless they say, because it’s priced in... not the case this time.

Two key things from the report: the ECB is ready to ease credit conditions more and the fact that PEPP remains key policy tool. By the way, PEPP is an emergency “pandemic” program of purchases of private and public sector securities in the amount of 750 billion euros and which will be in effect until the end of 2020. Programs of this kind are usually done in crisis. Their key feature is lowered bar for quality of purchased debt. The key purpose is to directly buy debt of struggling firms and local governments, which are avoided by other creditors because of concerns about creditworthiness.  The launch of the program basically leads to the appearance of indiscriminate buyer on the market which hampers market price discovery, leads to excessive risk-taking, etc., but these are considered to be manageable “side effects”. Another issue is that the program has a limit and it will end soon. With current pace of buying the ECB will reach the current limit in September-October. But the minutes, as we see, hinted that extension of the PEPP limit may be on the agenda of one of the next meetings. Given the ECB’s bias to act proactively, the expansion of PEPP may be discussed as early as June.

It is also curious that the ECB for the first time described medium-term uncertainty as radical uncertainty – i.e. risks which can’t be quantified. The Central Bank seeks a solution, experimenting more with preventive policy decisions which tend to cause positive shocks in market sentiments.

The USD index rose at the start of Monday although losing punch later, but it wasn’t about stronger USD: the cause of gains was weaker euro, which has the biggest weight in the index.

IFO index update showed expectations rose higher than expected, but assessment of current situation was worse than expected. A number of survey indicators for May, which we analyzed earlier, where respondents were asked to assess future expectations, turned out to be better than forecasts. This also indicates that a lot of expectations are priced in equities.

On balance, the balance for euro shifts towards more declines with possible test of the lower bound of two-month range: 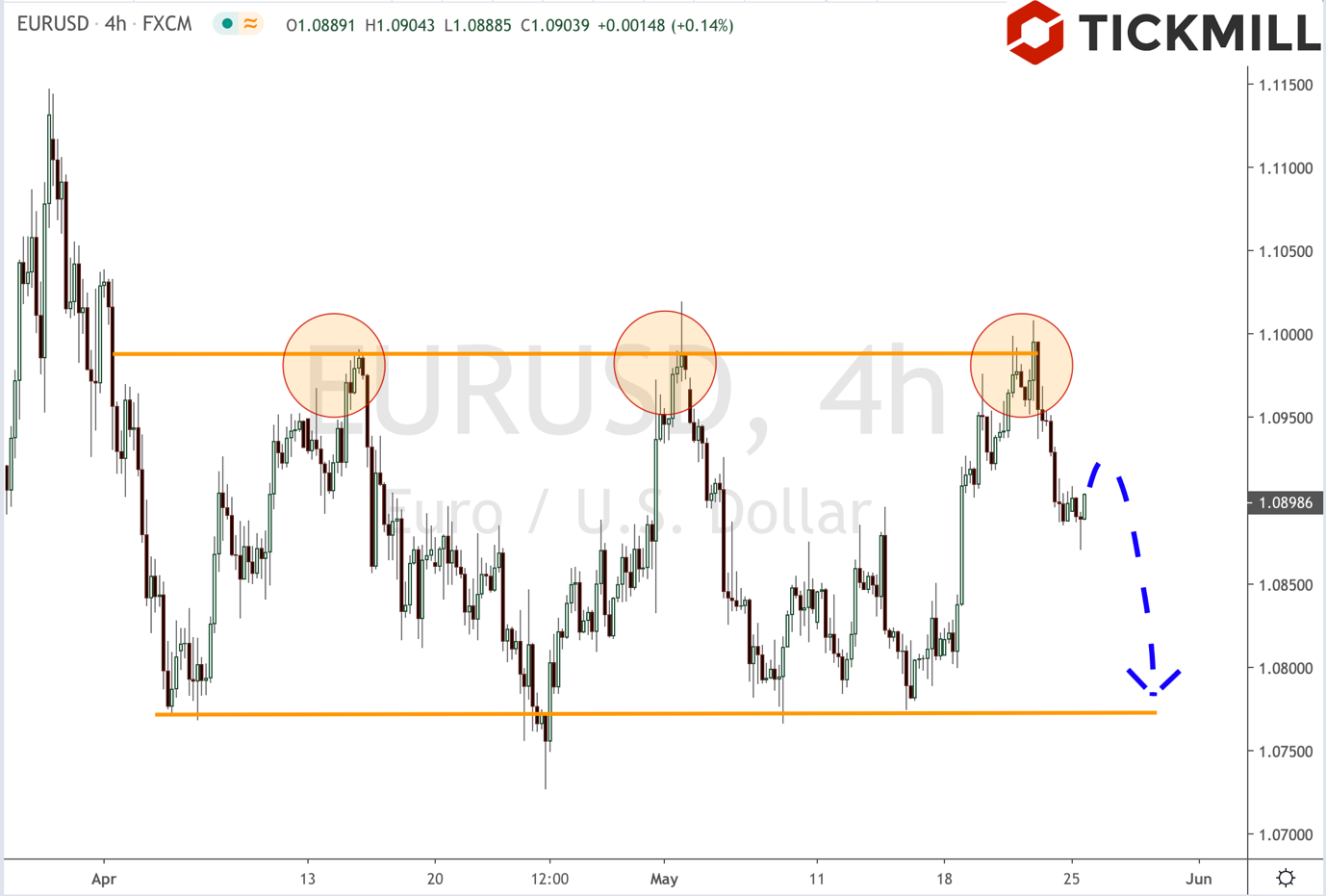 In Asian markets, attention has been drawn to a rise in the USDCNY reference rate to its highest level since the 2008 crisis. Pressure on the yuan is rising due to capital outflows, and the central bank of China has “officially recognized” this, weakening CNY official rate. Investors are getting rid of Chinese assets because of fear that a new conflict between China and the United States may escalate into a full-fledged financial war. The dynamics of USDCNY over the past two years shows that the mainland yuan depreciated against the dollar whenever Trump threatened tariffs and strengthened anti-Chinese rhetoric. The last episode of the weakening of renminbi probably reflects an anxiety of the same nature: 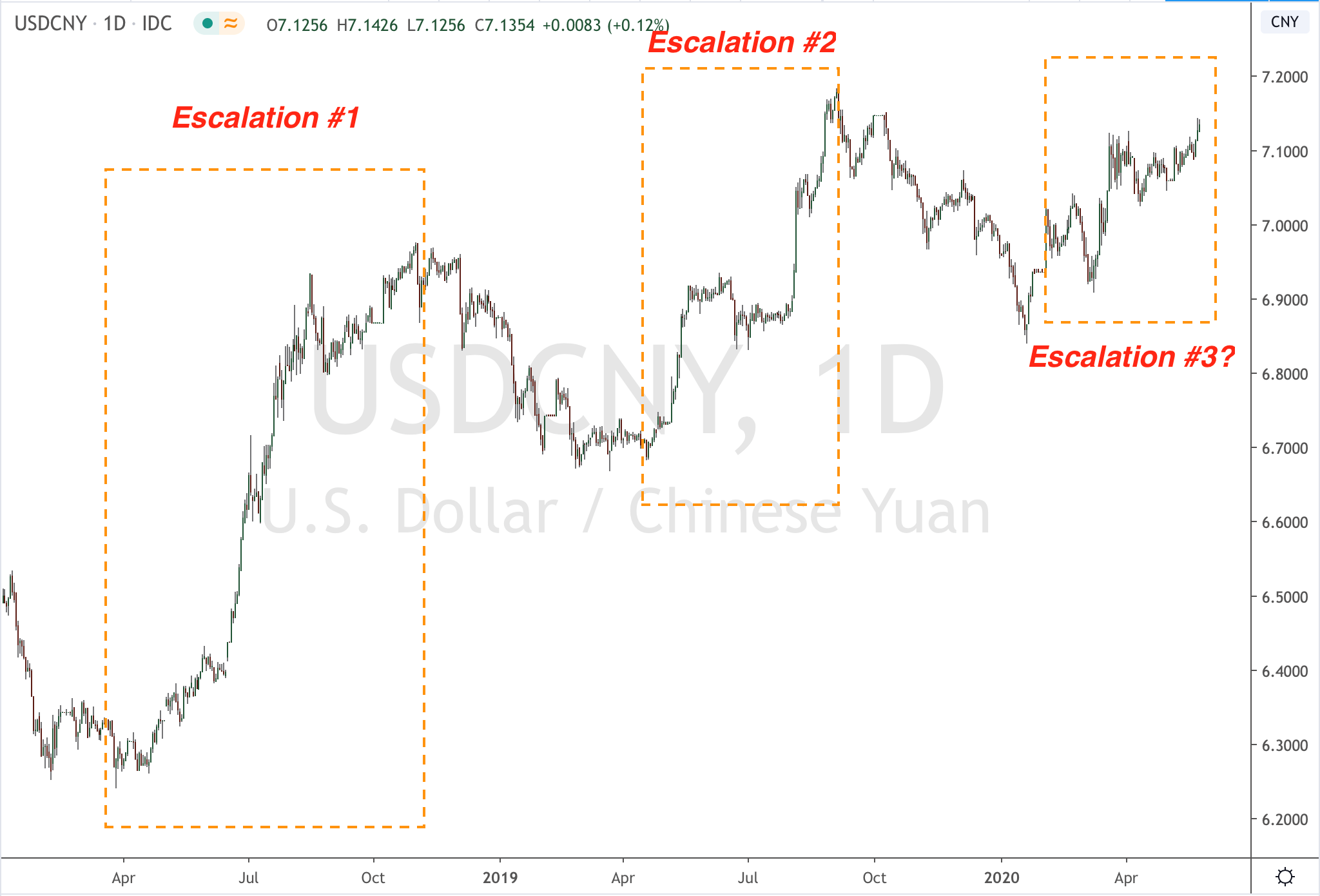 Accordingly, the demand for risk can get hit from this front as well, which is undoubtedly a positive factor for strengthening the dollar.

USD/RUB: Is a Global Reversal Ahead?

Could Oil Move Ahead of the Opec+ Meeting in March?

Dollar Sinks As Clarida Double's Down On Powell Comments