English
Deutsch
中文
Русский
Español
العربية
Polski
Tiếng Việt
REAL TIME NEWS
Loading...
Weekly Live Market Analysis In this week's live market analysis session we reviewed S&P500, DXY, EURUSD, GBPUSD,USDJPY, GOLD & CRUDE in relation to th...
Key Points from This Week COVID Second Wave Intensifies Fears over the rising second wave of COVID-19 intensified this week. The number of new infect...
Candidates Strike More Professional Tone The final US presidential debate last night saw both candidates striking a far more considered and profession...
Daily Market Outlook, October 22, 2020 Speaking last night, US House Speaker Pelosi said that she and Treasury Secretary Mnuchin were “just about the...
The "jingle" from the Congress, Treasury and the US administration about coronavirus aid was hollow again. Controversial messages culminated in Trump'...
Oil Traders Increase Longs The latest CFTC COT institutional positioning report showed that WTI traders increased their upside exposure in crude last ...
Voters and traders are gearing up for the final televised presidential debate this evening in the US. Following a messy and chaotic first event, where...
Daily Market Outlook, October 22, 2020 Equities remained under pressure during the Asian session, as investors await news of progress on a US fiscal ...
Chart of The Day NZDCAD NZDCAD Potential Reversal Zone & Probable Price Path NZD: The domestic bond market saw a higher and steeper curve, driven by...
Good day, The Euro keeps heading up, targeting a very strong psychological resistance at the level of 1.2000. Away from this level the currency pair ...
Looking at recent volatility, especially vigorous move to the upside, stock markets could rally on hopes that fiscal deal will be approved before the ...
Strong Q3 Growth While most of the developed economies in the world continue to see negative growth figures as the COVID pandemic wears on, China has...
Time Running Out As we move further into Q4 and further towards the end of the year, the likelihood of the UK and EU agreeing a trade deal remains ve...
Daily Market Outlook, October 21, 2020 Risk appetite was a little firmer in Asia, with equity markets broadly higher with the exception of Chinese st...
Chart of the Day GBPJPY GBPJPY Potential Reversal Zone - Probable Price Path GBP: The market continues to wait and see the progress of the negotiatio...
Talks Heading Down to The Wire Investors are anxiously awaiting headlines around US fiscal negotiation today. House Speaker Nancy Pelosi yesterday ann...
US Stimulus Concerns & COVID Fears Dominating Sentiment Global equities benchmarks are trading with a softer tone so far this week as sentiment contin...
Daily Market Outlook, October 20, 2020 Risk sentiment was cautious during the Asian trading session, following on from the weaker close in the US. Ma...
Biden’s lead in polls declined last week, albeit slightly, which still kept markets under pressure. The event which jumps into the foreground this wee...
RBC Capital Markets Week ahead: The last US presidential debate before the election occurs this Thursday. US House Speaker Pelosi set a Tuesday deadli...
Trading Strategies

Chart of The Day NZDUSD

Chart of the Day NZDUSD

NZD: There was a modest reversal higher in NZ rates yesterday, a day after the 2-year swap rate and the 2023 maturity government bond yield briefly crossed into negative territory. The sell-off in global bonds on Thursday night and some profit-taking in NZ rates pushed the 2-year swap rate 3bps higher, to 0.03%, and the 10-year rate 6bps higher, to 0.57%. There was also steepening of the government bond curve. Yesterday’s bond tender saw strong demand for the 2024 maturity but weaker demand for the 2037 bond. In domestic data, yesterday’s electronic card spending data showed total spending declined 7% in August, partly due to the reimposed lockdown in Auckland. Even with the fall in August, there should still be a sizable bounce in retail trade volumes in Q3. Earlier today, the RBNZ purchased NZD440 million of LGFA bonds, to meet its target. The RBNZ will keep purchases unchanged next week. Mixed second tier data out of New Zealand earlier today has not factored into price action. Instead, Kiwi is fixated on the bigger picture macro flow.

USD: US equities fell sharply in volatile trading on Thursday as tech shares resumed their sell-off. It was the fourth decline in five sessions for the major averages. US Treasury yields rose slightly on Thursday as market participants digested the latest US jobless claims data that came in worse-than-expected. The yield curve flattened after the government sold $23bn in 30-year bonds to solid demand, the final sale of $108bn in new coupon-bearing supply this week. The yield curve between 2-year and 10-year notes flattened one basis point to 54bps and the curve between 5-year notes and 30-year bonds flattened one basis point to 117bps. The US dollar was steady, with the US Dollar Index (DXY) hovering at around 93.172. Today’s focus in the US will be on August CPI data (Bloomberg Est +0.3% m/m, +1.2% y/y from +0.6% m/m, 1.6% y/y in July) and core CPI (Bloomberg Est +0.2% m/m, +1.2% y/y from +0.6% m/m, +1.0% y/y in July). The other notable US data will be August real average weekly earnings and the monthly budget statement for August. 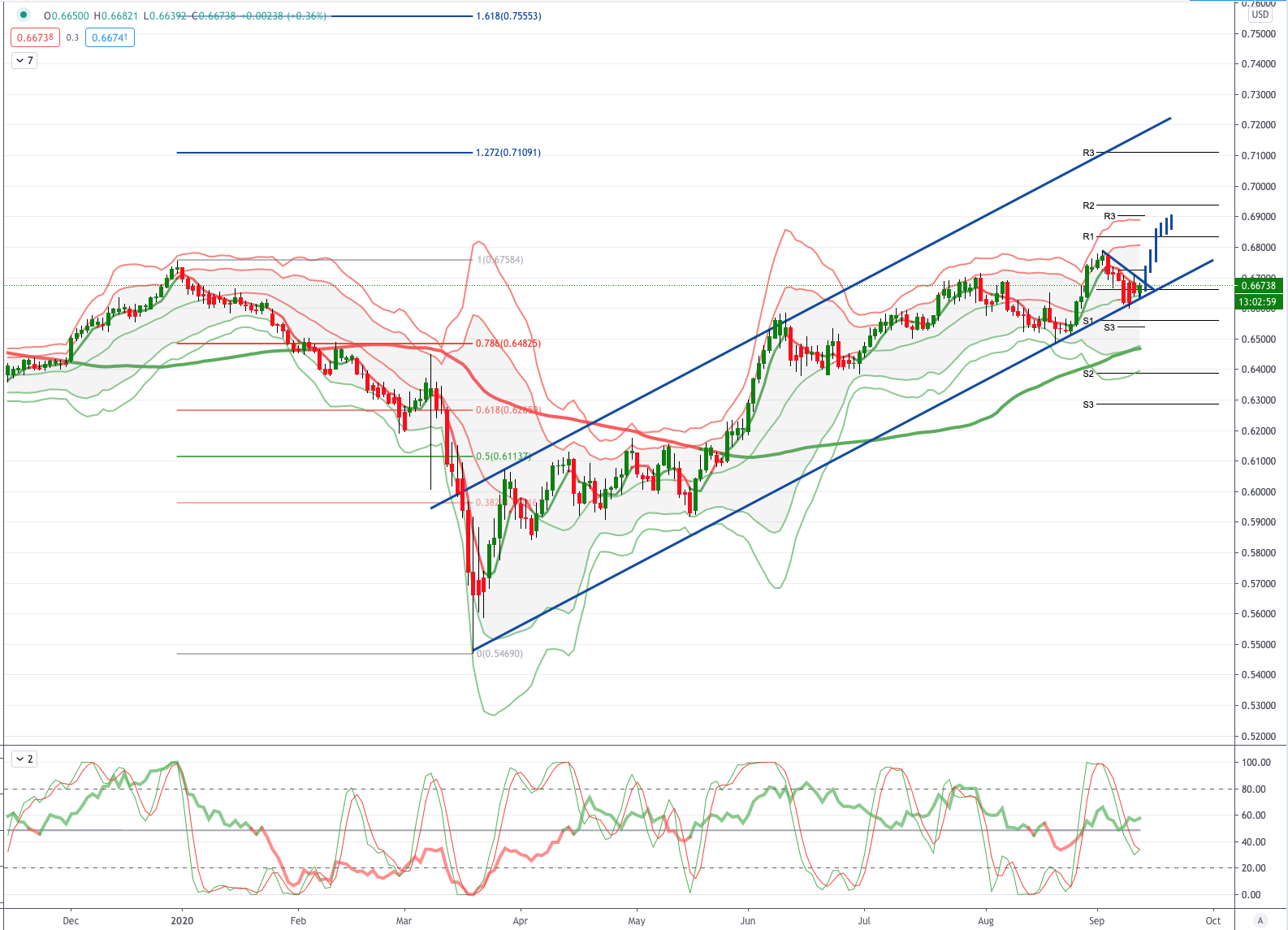 From a technical and trading perspective, the NZDUSD appears to be trading in a potentially bullish consolidation pattern holding ascending trendline support at .6650, bullish exposure should be rewarded on a closing breach of the interim descending trendline resistance sighted at .6700. Bulls should look for an extension higher to test offers and stops above .6900. On the day a close sub .6600 handle would negate the bullish thesi suggesting a more protracted corrective phase is underway testing bids back towards .6400

Biden Edges A Win Over Trump In Final Debate

Chart of The Day Nzdcad