English
Deutsch
中文
Русский
Español
العربية
Polski
Tiếng Việt
REAL TIME NEWS
Loading...
Biden’s lead in polls declined last week, albeit slightly, which still kept markets under pressure. The event which jumps into the foreground this wee...
RBC Capital Markets Week ahead: The last US presidential debate before the election occurs this Thursday. US House Speaker Pelosi set a Tuesday deadli...
Gold Gold prices have started the week in a relatively subdued manner with light flows noted over the European session so far on Monday. The main driv...
In this Weekly Market Outlook 19-10-20, our analyst looks into the trading week ahead, possible market moving data releases across the globe and the t...
Daily Market Outlook, October 19, 2020 Most equity markets have made a positive start to the week across the Asia Pacific, buoyed by optimism around ...
Chart of the Day AUDUSD AUDUSD Potential Reversal Zone - Probable Price Path AUD: Australia’s response to Covid-19 has been exceptional among G10 cou...
Good day,The Russian ruble should drop till the psychological level of 77.00 and uptrend, and then target the level of 80.00. The level of 77.00 has a...
Monday, October 19, 2020 - China's September GDP and industrial production is due on this day, as well as minutes of the recent RBA meeting. The Centr...
The European Central Bank should follow the lead of the Fed and choose rising household incomes as the underlying policy target, even if inflation tem...
US and EU equity markets show signs of stabilization after Thursday feast of bears. SPX futures touched 3440 level, which was the suspected point of t...
Weekly Live Market Analysis In this week's live market analysis session we reviewed our DXY fractal market map as it continues to give excellent insig...
"Lasting Damage" In its latest set of economic forecasts released this week, the International Monetary Fund struck a firmly dovish tone. The IMF warn...
Daily Market Outlook, October 16, 2020 Risk tone was subdued, as investors continued to weigh prospects of more US fiscal stimulus and rising global ...
Key Points From This Week UK Introduces Fresh Lockdown Measures The UK PM announced a new three tier lockdown system this week range in levels of sev...
Biden Maintains Lead Over Trump As the US elections draw closer, the gap between President Trump and Democrat candidate Joe Biden continues to widen....
Crude Traders Increase Upside Bets The CFTC COT institutional positioning report showed that WTI traders increased their upside exposure in oil last w...
As expected, US equities extend their pullback to more comfortable buying levels. After the red session on Wednesday, S&P500 futures continued their ...
Daily Market Outlook, October 15, 2020 Asian equity markets are mostly lower this morning following declines yesterday in Europe and on Wall Street. ...
Good day, The USD/RUB pair has tested the psychological level of 77.00, jumping to target the price of 80 Russian rubles against 1 USD. So far, the l...
Chart of the Day AUDUSD AUDUSD Potential Reversal Zone - Probable Price Path AUD: Australian home loan surged in August: Home loans approval value be...
Trading Strategies

A big week lies ahead with a slew of central bank meetings including the FOMC, BOE, BOJ, BI and CBC. The S&P 500 index closed the week slightly higher at +0.05%, but the Nasdaq 100 Composite Index chalked up 0.6% losses on Friday and marked its worst week since March, with VIX easing to 26.87. Meanwhile UST bonds advanced after recovering from earlier session lows despite the stronger-than-expected US’ August CPI inflation data, with the belly of the curve outperforming and the 10- year yield a tad lower at 0.67% as buyers emerged. The 3-month LIBOR rose to 0.2504%. Meanwhile, China has tightened rules and capital demands on non-financial companies that do business across at least two financial sectors and have financial assets exceeding CNY500b (for those with banking licenses) or CNY100b (for those without banking operations) from 1 November. Elsewhere, Israel has voted to impose a second nationwide lockdown starting Friday for at least three weeks, Turkey’s sovereign credit rating was cut by Moody’s to B2, and AstraZeneca and University of Oxford have restarted their vaccine trial.

Starting with the FOMC, this is the last meeting ahead of the 3 November elections and especially given the current fiscal stimulus impasse, we expect a clarification of the specifics of its new average targeting framework (eg. how long will the Fed allow the temporary overshoot of inflation for instance) as well as the updated SEP forecasts (which will likely reflect the Fed Funds rate being static in the new 2023 forecasts), followed by the BOE (where the prospects of a no-deal Brexit is back on the table with the highly controversial Internal Bill Agreement being debated, and may weigh on the BOE to be more cautious, albeit divided), and BOJ (where governor Kuroda is likely to continue to lean on the dovish side). Friday is also the quadruple witching for US markets with the quarterly expiration of futures and options on indexes and stocks. 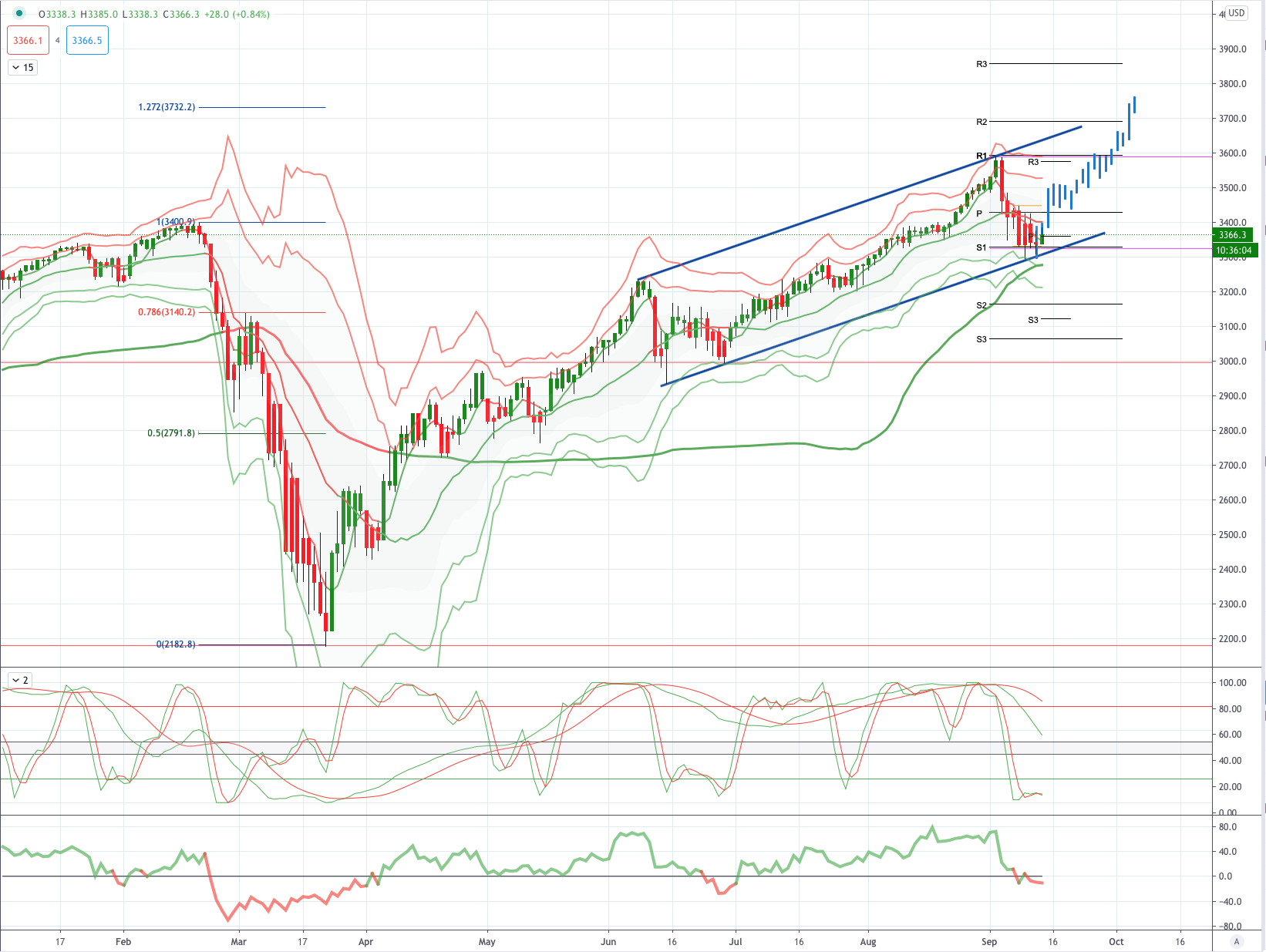 From a technical and trading perspective, the S&P500 continues to consolidate just above symmetry swing and trendline support sighted at 3300 as this level continues to attract buyers there is a window for another leg of upside expansion which should see this initial cycle off the March pandemic crisi lows complete at an ideal 3732 equality and Fibonacci objective. From this level a more meaningful correction may develop as we head into what appear to be a very uncertain US political season with players likely looking to take some chips off the table until the outcome of the US elections. There are strong and dominant cyclical patterns that support this view as discussed in last week's live analysis session. A breach of 3300 would negate the upside expansion thesis suggesting that the pre election high is in and we likely see more downsie rotation into the the November 3rd election day.

Disclaimer: The material provided is for information purposes only and should not be

considered as investment advice. The views, information, or opinions expressed in the text belong solely to the author, and not to the author’s employer, organization, committee or other group or individual or company.

Last Chance for Trump to Narrow the Gap

Chart of The Day Audusd

Usd/rub Keeps Targeting the Level of 80!

Key Economic Events for the Week Ahead

Time to Favor Value Over Growth Stocks? Goldman Argues That This Is the Case