English
Deutsch
中文
Русский
Español
العربية
Polski
Tiếng Việt
Portuguese
REAL TIME NEWS
Loading...
NZD Soars The New Zealand Dollar has broken out to its highest levels since April 2018 this week. Benefitting from the broad recovery in risk appetit...
Powell Testifies US equities were shunted lower yesterday in response to comments made by chairman of the Federal Reserve, Jerome Powell. Testifying...
A downward correction in the crude oil market, after recovery of output and refinery operations on the Gulf Coast, was short-lived. Brent quotes rose ...
Powell to Testify Today Fed chairman Jerome Powell will be in the spotlight when he testifies before the Senate Banking Committee later today. The Fe...
US Inflation Expectations Cap S&P Rally Global equities benchmarks are broadly rebounding against recent losses over the European morning on Tuesday....
A key trading theme on Monday has been renewed rise in market risk-free interest rates in the US. The yield on 10-year Treasury bond after short conso...
RBC Capital Markets Week ahead: Central bank communication dominates the week, with Fed Chair Powell's Congressional testimony (Tuesday & Wednesday)...
Gold Gold prices fell to their lowest level since July last week amidst an uptick in US inflation expectations. An unexpectedly strong January US Re...
In this Weekly Market Outlook 22-02-21, our analyst looks into the trading week ahead, possible market moving data releases across the globe and the t...
Daily Market Outlook, February 22, 2021 Market risk sentiment has started the week on a cautious note, with equities across the Asia-Pacific region s...
Good day, The price of gold has closed with a doji last Friday, facing a very strong support at the level of 1767.00. Hence, there is a potential tha...
On Monday, investors will look closely at the Bank of China's benchmark interest rate decision to see if the central bank is trying to maintain its st...
South African advanced on Friday in anticipation of the Treasury budget message next week, while losses in most other emerging market currencies were ...
The recent surge in demand for USD fueled by rise in Treasury yields seems to be abating as the outflow from the Treasury market slows. The 10-year T-...
Weekly Live Market & Trade Analysis In this week's live market and trade analysis session, we assessed the technical price patterns of over 20 charts ...
Dollar up, Dollar Down It’s been a fairly volatile week for USD with the Dollar Index rallying off the initial lows of the week before reversing and...
Key Points from This Week UK CPI Improves Following on from the news that the UK avoided a double dip recession in the final quarter of 2020, ther...
Daily Market Outlook, February 19, 2021 Market risk sentiment looks to be ending the week on a soft note, with equity markets across the Asia Pacific...
The minutes of the Fed meeting brought relief to equity investors as the US Central Bank made it clear that it acknowledges the fact that inflation is...
Good day, The price of the Euro is pulling back to the broken downtrend, which is also a flag. The asset might retest the level of 1.2000 soon. The p...
Fund Analysis

Stock markets in Asia extended losses on Wednesday, as it seems that the buoyancy related to G-20 trade truce is giving way to concerns about new tariffs against the EU and the global deterioration in manufacturing PMIs.

South Korea, one of the Asian leaders in export of goods with high added value, said it expects a slowdown in economic growth and export volumes. Two thirds of the country's exports account for trade with regional partners, thus deteriorating forecasts is a signal of growing economic issues among its neighbors.

The dividend-oriented sectors, such as utilities and real estate, supported the modest growth of US stock indices on Tuesday, which may indicate a gradual increase in investor rotation from “growth” to “value” stocks, that is, a reduction in risk appetite.

The trade truce between China and the United States goes into the category of "latent" sources of optimism, since the easing of sanctions on Huawei only laid a solid foundation for the positive development of trade talks. Unfortunately, concrete actions are bereft of certain deadlines, since previous “active phases” of the trade war have shown the full breadth of the US claims to China.

The gauges of business activity in the manufacturing sectors of US, Eurozone and China, released earlier this week, have seized the initiative in leading market sentiments. As for the positive aspects from this row of reports, we can highlight only better-than-expected prints ​​of broad ISM indices on manufacturing and employment in US: 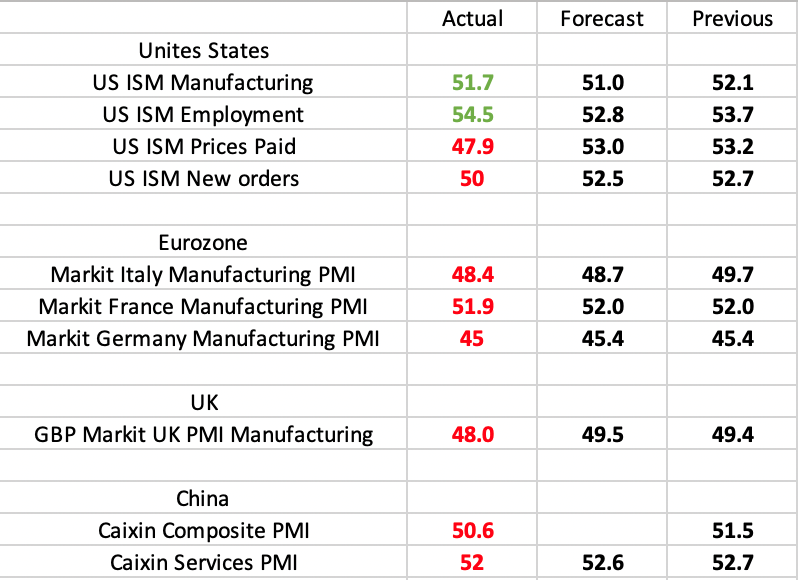 The slowdown in services sector in China is of considerable concern, since even during the active phases of the trade standoff, activity in the sector remained stable, suggesting that the trade war has a limited effect that only extends to export manufacturers. Now it is clear that the fire spread to the "surviving" components of the Chinese economy.

USTR has published an additional list of European goods worth $4 billion which are subject to new tariffs. Earlier in April, the department introduced tariffs for $21 billion dollars of European goods. The latest victims of tariffs were European producers of olives, Italian cheese and Scotch whiskey.

Rising demand for US government bonds is accompanied with the respective review of “50 bp cut” outcome of July meeting. The chances for the sharp rate cut rose to 29.7%. The yield on 10-year UK bonds fell to 0.722, for the first time in 10 years, being below the key rate set by the Central Bank. Demand for fixed-income safe assets is growing despite Mark Carney’s determination to raise rates in case of “soft” Brexit outcome.

Trump announced that he intends to nominate new candidate for Federal Reserve board of governors, a supporter of the gold standard Judy Shelton. In a recent article in WSJ, she spoke in favour of changing the money regime, but from the point of view of practical value (especially for Trump), her willingness to lower the interest rate to 0% is particularly interesting. Gold prices cheered the news, as the interest of current and potential Fed officials in the use of gold in monetary policy can have far-reaching consequences for its role in the economy.

Room for an Oil Rally? Depends on the Timeframe!

Powell In Focus As Us Yields Soar