English
Deutsch
中文
Русский
Español
العربية
Polski
ภาษาไทย
Tiếng Việt
Portuguese
REAL TIME NEWS
Loading...
The dollar is shrugging off a wave of shorts that led to decline of the US currency index from 94.00 to 93.50 area on Tuesday. The decline has been co...
Canadian CPI Up Next The key data focus heading into today’s US session is the release of September’s Canadian CPI. On the back of the weaker-than-fo...
Revamping Old Patterns In terms of technical setups, the best advice is always to keep things simple. There are plenty of complicated, esoteric chart...
CPI Stalls, But Still Above Target The latest set of UK inflation data released today showed that CPI softened somewhat over the last month. Followin...
Citi European Open We saw markets hold mostly steady in a morning marked by Chinese data. USD and other G10 currencies held mostly steady, while AUD...
USDJPY due for a potential short term pullback Type Bearish Reversal Resistance: 115.567 Support: 113.798 Pivot: 114.581 Preference: USDJPY is ...
DAX is at a Pivot, potential for bounce Type: Bullish Bounce Resistance: 15615.04 Support: 15375.94 Pivot: 15450.25 Preference: DAX have recent...
Daily Market Outlook, October 20th, 2021 Overnight Headlines Biden Tells Democrats Package Of Up To $1.9T Should Be Target Progressives See Budget D...
After reassessment of the pace of policy tightening by major central banks on Monday, which led to a sharp rise in short-term bond yields (German 2-ye...
AUD In Demand The Australian Dollar has been well bid across the European today following the release of the bank’s latest meeting minutes overnight....
FTSE At Key Level The FTSE is now trading back around its highest levels of the year. Following a frustrating sideways period over the last six month...
Better Start For Equities It’s been a mostly better start for global equities benchmarks this week as the pullback in the US Dollar allows asset mark...
Citi European Open Positivity seemed to mark the Asian morning, which saw USD offered against most currencies. The largest gainers were AUD, NZD and...
Daily Market Outlook, October 19th, 2021 Overnight Headlines US Democrats Battle Over Climate Change Plans In $3.5 Trillion Bill Manchin Casts Doubt...
Despite the weak report from U. Michigan on Friday and unsettling economic update from China on GDP and production on Monday, markets are busy pricin...
Type: Bearish Reversal Resistance: 15731.44 Support: 15446.18 Pivot: 15606.47 Preference: Price have approached our Pivot at 15606.47 which is a...
Type: Bearish Reversal Resistance: 115.814 Support: 112.088 Pivot: 114.61 Preference: Price has been consolidating in ascending channel. We spot...
In this Weekly Market Outlook 18-10-21, our analyst looks into the trading week ahead, possible market moving data releases across the globe and the t...
Daily Market Outlook, October 18th, 2021 Overnight Headlines US Democrats Face A Deadline On Benefits And Climate Bill Consensus Senator Johnson Hop...
The Russian ruble broke the key support at the level of 71.50 and dropped, targeting the support at the level of 70.50. So far, the currency pair seem...
Tech Analysis Trading Strategies

Asian shares rallied to three-month highs on Monday as progress on economies reopening helped offset jitters over riots in U.S. cities and the geopolitical tensions between the U.S. and China. There was also relief that while President Donald Trump began the process of ending special U.S. treatment for Hong Kong to punish China, he left the Phase one deal intact.

The dollar slipped on Monday as investors looked past unrest in the United States to the global economic recovery from the coronavirus. On Friday, we have a very weak print of U.S. personal spending. Even as emergency government aid gave incomes a boost in April, coronavirus lockdowns caused Americans to shut their wallets, prompting the personal spending to have dropped by 13.6% - the largest drop  in consumer spending on record. Yet investors are showing optimism over the economies reopening and the rally in the stock market, and USD could weaken further if the optimism is to continue.

Copper prices climbed higher as U.S. President Donald Trump’s response to China's security legislation on Hong Kong was not as severe as the market had expected. Investors heaved a sigh of relief after Trump ordered the process of eliminating special U.S. treatment for Hong Kong but did not mention any action that would undermine the U.S.-China Phase 1 trade deal. Trump’s response to the tensions lingering over Hong Kong has been closely watched by the markets and investors who fear that a new tariff war could put a further dent on the global economy and weaken the demand for copper.

Gold prices soared higher after reports of riots in the United States sparked a new wave of risk aversion returning to the markets, and rattled investors’ confidence as they reel from the deepening Sino-US rift. Looking ahead, demand for the metal could climb higher, driven by fresh concerns on the recovery of the already dampened global economy as a result of the pandemic.

While at the end of last week we saw oil making a late upwards push, at the start of the Asian trading session, oil prices held steady and started drifting sideways as traders took into account the weekend unrests coming out from across the U.S, coupled with deteriorating trade relations between US and China… Amidst this back drop, observers are still waiting for OPEC+ meeting happening this month and are expecting that the coalition could look to extend supply cuts. In line with oil price drifting sideways, the CAD held its own against the USD despite the USD weakness and drifted sideways as well. 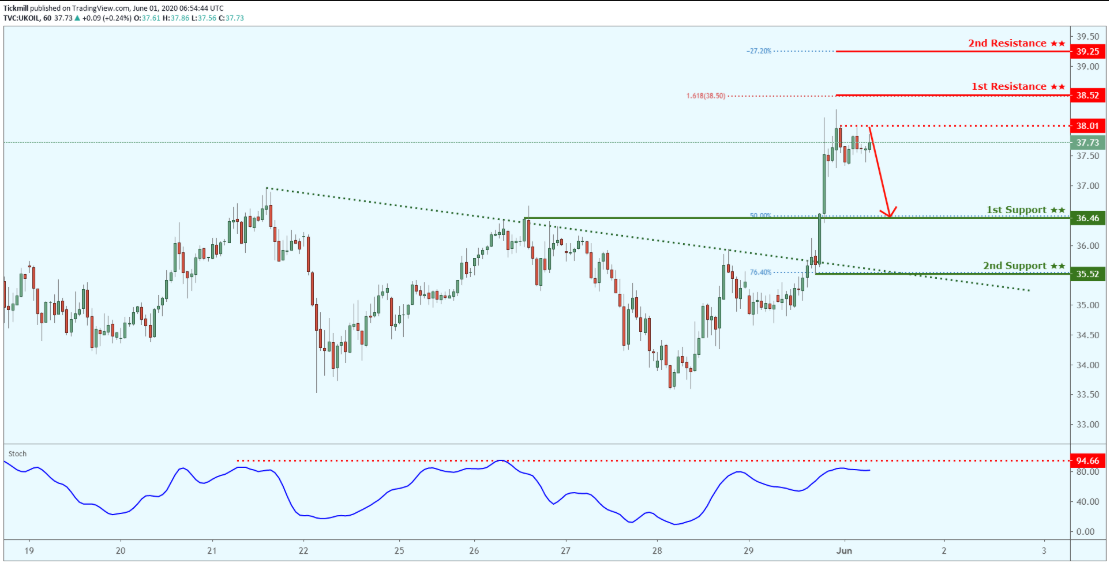 Oil rose higher and drifted sideways. With stochastics now testing resistance where price pulled back in the past and price coming close to a key Fibonacci extension level, a short term pull back below 1st resistance at 38.52 towards 1st support at 36.46 is expected. 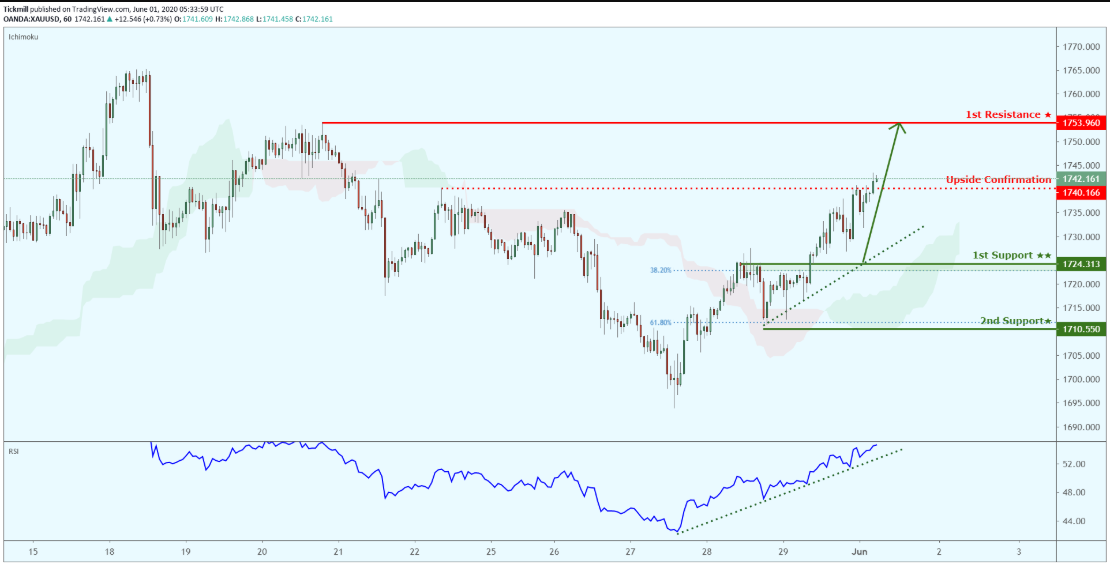 We caught the breakout perfectly previously. Price is currently testing our intermediate resistance level where a break above this level would provide the bullish acceleration to our first resistance target. RSI and Ichimoku cloud are showing signs of bullish pressure as well.

We caught the bounce perfectly previously. Currently, price is facing bullish pressure from our ascending trend line and support level, in line with our 61.8% fibonacci extension and 38.2% fibonacci retracement, where we remain bullish above this level and could see a bounce to our first resistance level. Stochastic and Ichimoku cloud are showing signs of bullish pressure, in line with our bullish bias.

High Risk Warning: CFDs are complex instruments and come with a high risk of losing money rapidly due to leverage. 71% and 61% of retail investor accounts lose money when trading CFDs with Tickmill UK Ltd and Tickmill Europe Ltd respectively. You should consider whether you understand how CFDs work and whether you can afford to take the high risk of losing your money.
Written by Desmond Leong
Desmond Leong runs an award-winning research firm (The Technical Analyst finalists 2018/19/20 for Best FX and Equity Research) advising banks, brokers and hedge funds. Backed by a team of CFA, CMT, CFTe accredited traders, he takes on the market daily using a combination of technical and fundamental analysis.
Previous Post

Oil is Coming Back to Life