English
Deutsch
中文
Русский
Español
العربية
Polski
ภาษาไทย
Tiếng Việt
Portuguese
REAL TIME NEWS
Loading...
The key event next week is undoubtedly the Fed meeting on Wednesday. There is some disagreement in the market as to whether there will be hints of an ...
The Bank of Russia at the meeting on Friday raised its key rate by 0.5 percentage points - up to 5.5%. The Board of Directors of the Central Bank expl...
The ECB disappointed euro bulls on Thursday, as it said it would maintain high level of monetary stimulus in 3Q. It was expected that the ECB will ann...
Nikkei is testing and reacting above recent swing low support and 78.6% Fibonacci retracement. A short term intraday bounce above our Pivot towards de...
EURUSD, H4 is above pivot, potential for bounce. Price is approaching the 23.8% fibonacci retracement, 100% fibonacci extension where we may potential...
DAX testing our pivot, potential for rise Price is testing our Pivot, in line with 100% fibonacci extension and horizontal graphical overlap. where we...
Prices is appraoching pivot in line with 78.6% Fibonacci retracement and 78.6% Fibonacci extension. Prices might push down towards horizontal swing lo...
Weekly Live Market & Trade Analysis In this week's live market and trade analysis session, we assessed the technical price patterns of over 20 charts ...
Daily Market Outlook, June 11, 2021 Overnight Headlines Fed to announce QE taper in Aug or Sept on rising inflation concerns – Reuters poll • Bipart...
USDJPY is facing bearish pressure as it continues to hold below the descending trendline resistance and MACD is holding under the 0 line. We could see...
Oil prices came under pressure on Wednesday; WTI struggled to stay above the $70 mark. The catalyst for the decline was bearish EIA report on commerci...
Price is reversing from our Pivot, in line with 50% fibonacci retracement, 78.6% fibonacci extension and horizontal graphical overlap. where we may se...
EURUSD approaching pivot, potential for drop . Price is approaching the 61.8% fibonacci retracement, where we may potentially see a drop towards the 1...
The Russian ruble was trying to break the level of 72.30 on Wednesday. However, the asset managed to slightly break the level and pull back. So, there...
Daily Market Outlook, June 10, 2021 Overnight Headlines ECB to keep money taps wide open even as recovery takes hold • ECB policymakers to hold 3-da...
Prices are facing bullish pressure from ascending trendline support in line with 61.8% Fibonacci retracement and 78.6% Fibonacci extension. Prices mig...
Nikkei coming close to descending trendline resistance and Key 61.8% Fibonacci retracement. A short term pullback below our Pivot towards graphical sw...
USDJPY is testing Pivot, in line with 38.2% Fibonacci retracement, 61.8% Fibonacci extension and horizontal pullback support. We could see a bounce an...
Oil prices rose on Tuesday continuing to develop modest upside momentum on Wednesday. WTI has broken the $70 per barrel mark for the first time since ...
GBP has seen a fresh wave of buying across the European morning on Wednesday in response to comments made yesterday by the Bank of England’s chief eco...
Tech Analysis Trading Strategies

Stocks in Asia went higher for a second day, shrugging off geopolitical tensions. Tensions between the U.S. and Beijing remain in focus after China condemned the U.S. for adding 33 Chinese entities to a trade blacklist. At the same time, China sought to reassure HK that its judiciary world remains independent under new national security law. U.S. Treasury yield was little changed at 0.66%.

USD lost traction on Tuesday due to the bullish sentiment. The market is encouraged by the reopening of the major global economies. Recently, California allowed churches to reopen with a limited congregation of below 100. Further to ease the fears could be US President Donald Trump’s refrain from opposing the Hong Kong bill during his latest comments.

Copper prices tumbled lower as the market opened on Tuesday, with investors focused on the rising Sino-US tensions while supply constraints eased. Meanwhile, according to a report by Reuters, China's copper consumption is weakening as a backlog of factory orders clears and the call on refined metal to replace limited scrap supply fades. The most-traded July copper contract on the ShFE fell as much as 1.2% to a one-week low of 43,210 yuan ($6,054.36) a tonne, before closing 0.2% lower at 43,650 yuan.

Gold traded sideways as investors swayed between optimism over the reopening of the global economy and concerns over the lingering tensions in Hong Kong and Venezuela. According to Reuters, China's foreign ministry office in Hong Kong and the city's security chief defended proposed security laws by describing some acts in mass pro-democracy protests last year as terrorism. Elsewhere, a second Iranian vessel carrying fuel had entered Venezuelan waters, in defiance of the US sanctions.

Oil prices opened and drifted higher during today’s Asian trading sessions. This price action came following a prediction from Russia’s energy ministry tweeting that they see global oil demand and supply balancing over the next two months. Further, Russia’s energy minister, Alexander Novak pointed out that global curbs have exceeded the amount agreed upon by the coalition. In line with oil prices, we see that the CAD should be rising in line with oil prices. However market observers warned that investors should still trade with caution as no one knows when we could see a sharp decline in demand again should a 2nd wave of virus outbreak happen. 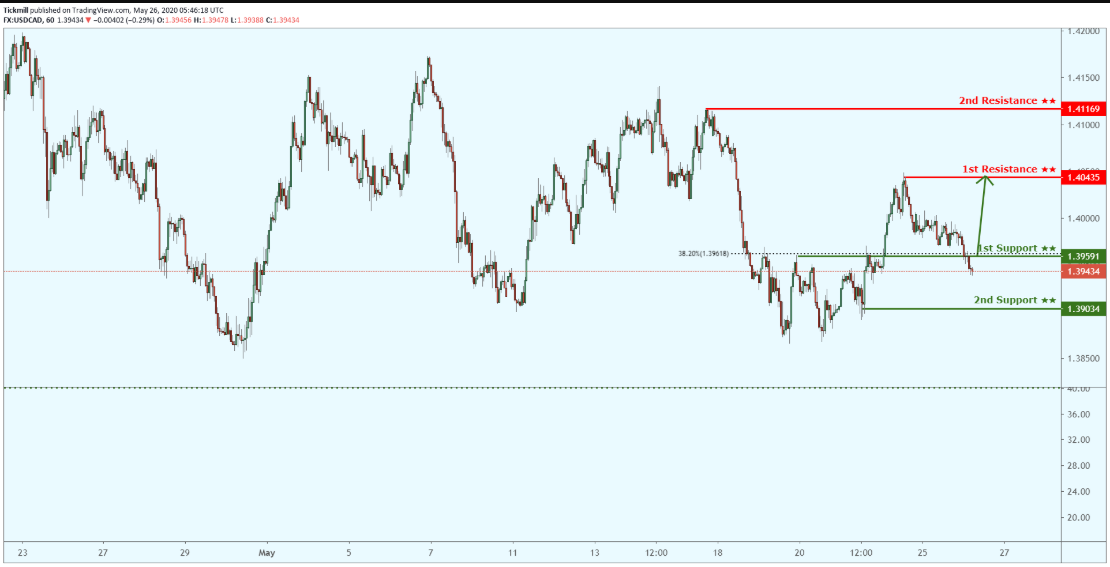 We turned bullish as price is approaching our 1st support  where the 38.2% fibonacci retracement and horizontal overlap support are.Price is likely to bounce here towards our 1st resistance.Stochastics also shows support here.

Oil prices drifted higher, however failed to break above recent swing high at 36.66. As long as 1st resistance at 36.66 holds, a short term set back below, towards 1st support at 32.03 can be expected. Further RSI momentum indicator is testing descending resistance where price reacted in the past with room for further downside potential. 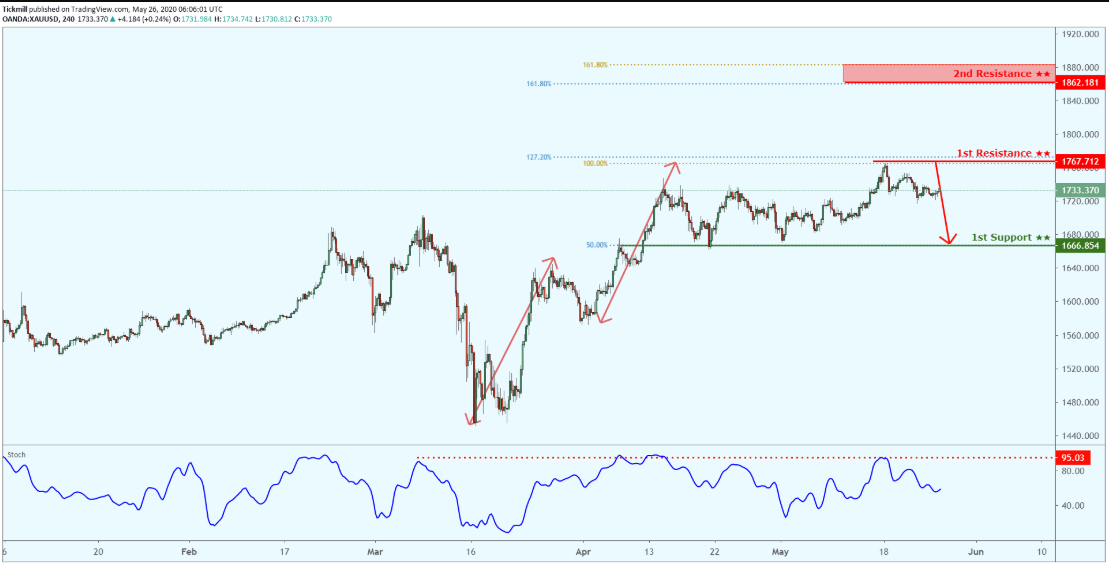 Price traded sideways previously. We remain bearish below our first resistance, in line with our 127.2% fibonacci retracement and 100% fibonacci extension, where we could see a further drop to our first support level. Stochastic is facing bearish pressure from our resistance as well. 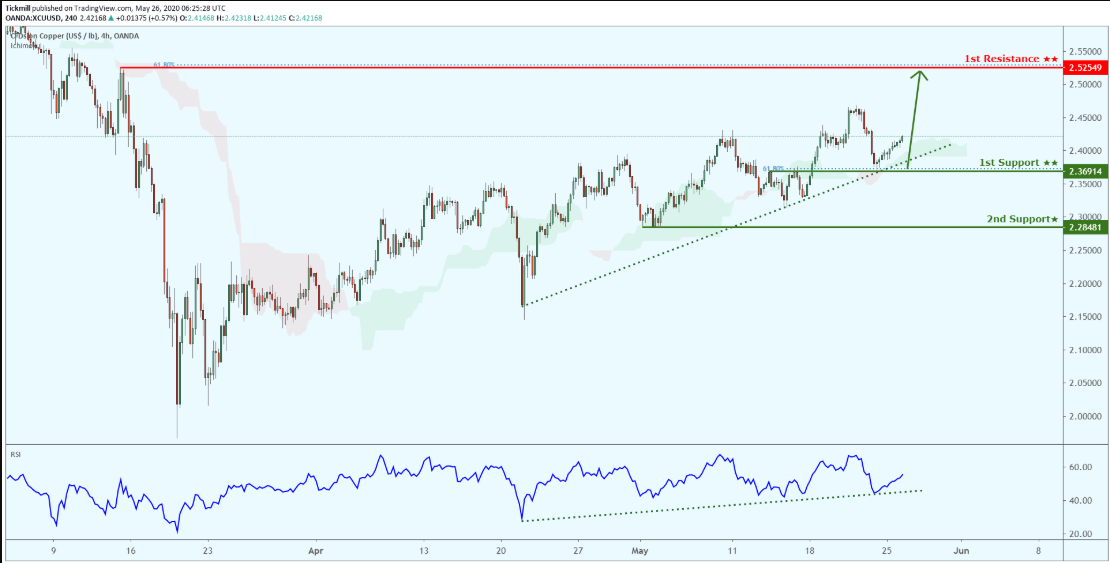 We caught the bounce nicely from our first support level and remained bullish above our support at 2.36914, in line with our horizontal pullback support, ascending support line and 61.8% fibonacci retracement where we could see a bounce to our first resistance level. RSI and Ichimoku cloud are showing signs of bullish pressure in line with our bullish bias.

High Risk Warning: CFDs are complex instruments and come with a high risk of losing money rapidly due to leverage. 73% and 65% of retail investor accounts lose money when trading CFDs with Tickmill UK Ltd and Tickmill Europe Ltd respectively. You should consider whether you understand how CFDs work and whether you can afford to take the high risk of losing your money.
Written by Desmond Leong
Desmond Leong runs an award-winning research firm (The Technical Analyst finalists 2018/19/20 for Best FX and Equity Research) advising banks, brokers and hedge funds. Backed by a team of CFA, CMT, CFTe accredited traders, he takes on the market daily using a combination of technical and fundamental analysis.
Previous Post