Market edged up slightly overnight supported by trade optimism as the United States and China finally signed the so-called Phase One trade deal that involves a Chinese pledge to purchase at least an additional $200b US farm goods and other goods and services over two years. The US in return promised to hold off planned tariff increases and cut levies on $120m Chinese goods by half to 7.5%.

The eight-part agreement also covered some nagging issues on intellectual properties and acts as a truce to the nearly two-year old trade dispute initiated by the Trump Administration in 2018, temporarily lifting uncertainties in the year ahead of the US general election. President Trump promised to drop all US tariffs after the Phase 2 agreement was completed, that is expected to start soon.

Three Fed Policy makers speaking at different events appeared to be comfortable with the currently appropriate level of rates, reaffirming expectations that the Fed would not cut rate this year.

US factory gate inflation subdued; New York Empire State Manufacturing Index posted best reading in 8 months: Producer prices index for final demand missed estimate to pick up a mere 0.1% MOM in December (Nov: 0.0%) but was nonetheless slightly faster that November rate. The annual pace of increase managed to accelerate to 1.3% YOY (Nov: +1.1%) but still fell short of the around 2-3% range reported in 2018 and earlier 2019. Core PPI inflation eased to 1.1% YOY (Nov: +1.3%), reaffirming the lack of factory gauge inflation. On a separate note, the New York Fed Empire State Manufacturing Index rose to 4.8 in January (Dec: 3.3), its best reading in eight months, attributed to higher new orders, a positive start to 2020.

US Fed Beige Book reported modest economic activity as manufacturing sector shed jobs: The first Federal Reserve Beige Book of 2020 reported that the US economic activity continued to expand “modestly” in the final six weeks of 2019, suggesting little change in the economy. A few key points include holiday sales were said to be solid, manufacturing activity, home sales were flat. Low inventories were restraining home sales and new residential construction expanded modestly. Employment was either steady or rising modestly with a number of districts reporting job cuts or hiring reduction in the manufacturing sector, transportation and energy sectors. Overall the labor markets remained tight throughout the nation. Prices continued to rise at a modest pace.

Eurozone industrial production slipped for 13th month: Eurozone industrial Production contracted by 1.5% YOY in November (Oct: -2.6% revised) marking its 13th month of back-to-back contraction despite a 0.2% expansion (Oct: -0.9% revised) on a monthly basis. Data for October had also been revised further down to reflect larger contraction, both on yearly and monthly basis. November print alongside the new October figure continued to paint a weak picture of the Eurozone manufacturing economy which is in line with the recent deterioration in PMI data that suggest that the downturn in the industrial sector would weigh on 4Q GDP growth. Other data from the Eurostat showed that the seasonally adjusted trade surplus narrowed to €19.2b in November (Oct: €24b revised), missing the market expectation of €22.0b.

UK inflation missed expectations: UK latest inflation data were a major disappointment as headline CPI index was unchanged in December (Nov: +0.2%) that left the annual pace of change softer at 1.3% YOY (Nov: +1.5%), undershooting consensus forecast of 1.5% and was the slowest rate recorded in more than three years. The deceleration in prices gain was a result of slower gain in prices of food & non-alcoholic beverages, alcohol & tobacco and a decline in prices of clothing and footwear Core CPI growth also pulled back significantly to 1.4% YOY (Nov: +1.7%), after staying at 1.7% for three months reflecting the loss in momentum in underlying inflation. December CPI print moved further away from the BOE’s 2 % inflation target and added to a trove of recently weak UK data, reaffirming expectations that the central bank might cut its benchmark bank rate by 25bps to 0.5% as soon as late January. Policy makers had grown increasingly concerned over the UK growth outlook despite the easing in Brexit uncertainties following early December election with outgoing governor Mark Carney hinting a possible rate cut in a recent interview with the Financial Times. 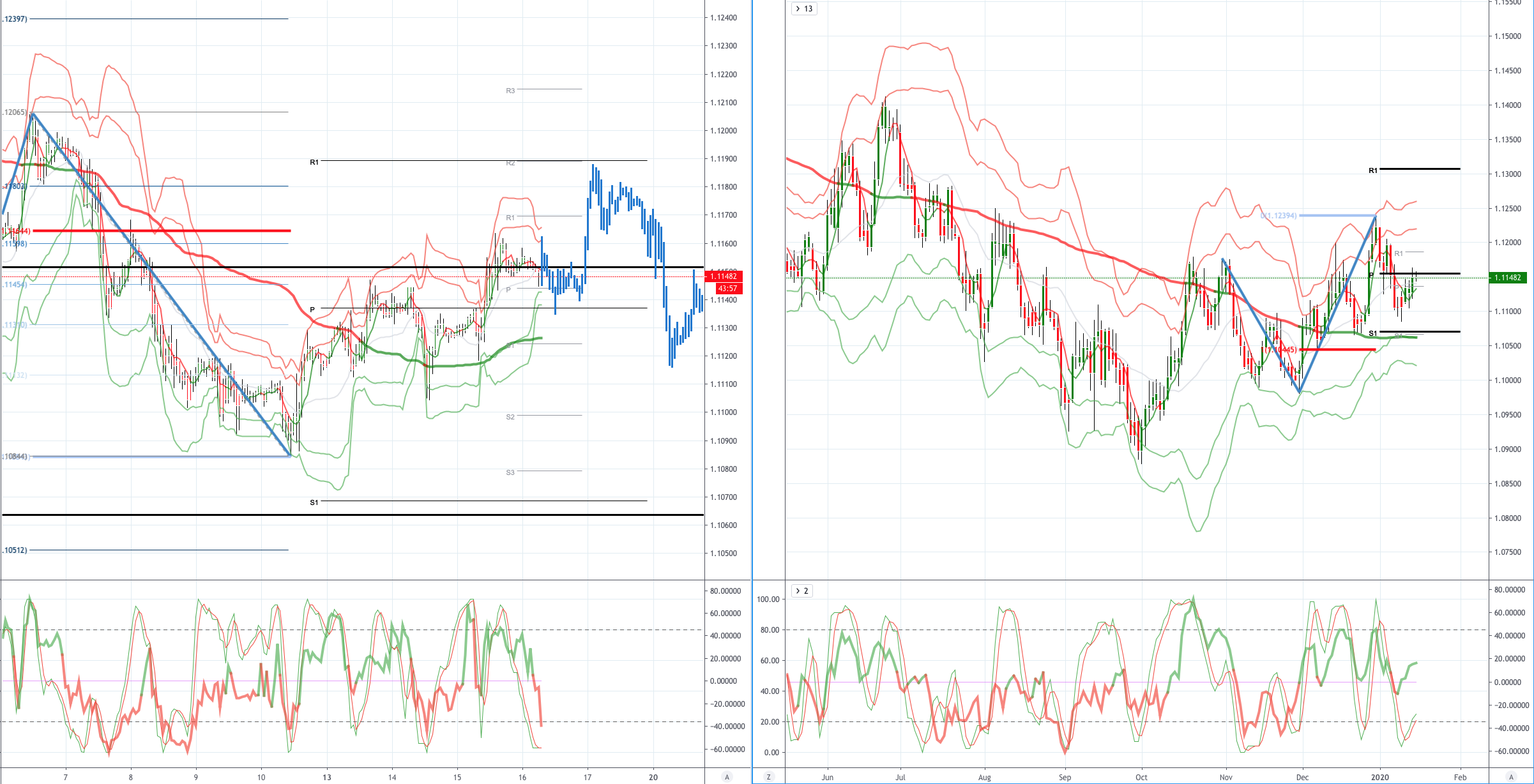 GBPUSD From a technical and trading perspective, another failure below 1.3150 opened anticipated test of bids below 1.3000, as 1.3060 caps corrections to the upside look for a test of bids and stops below 1.2950. Only a close above 1.31 would suggest a delay to downside objectives 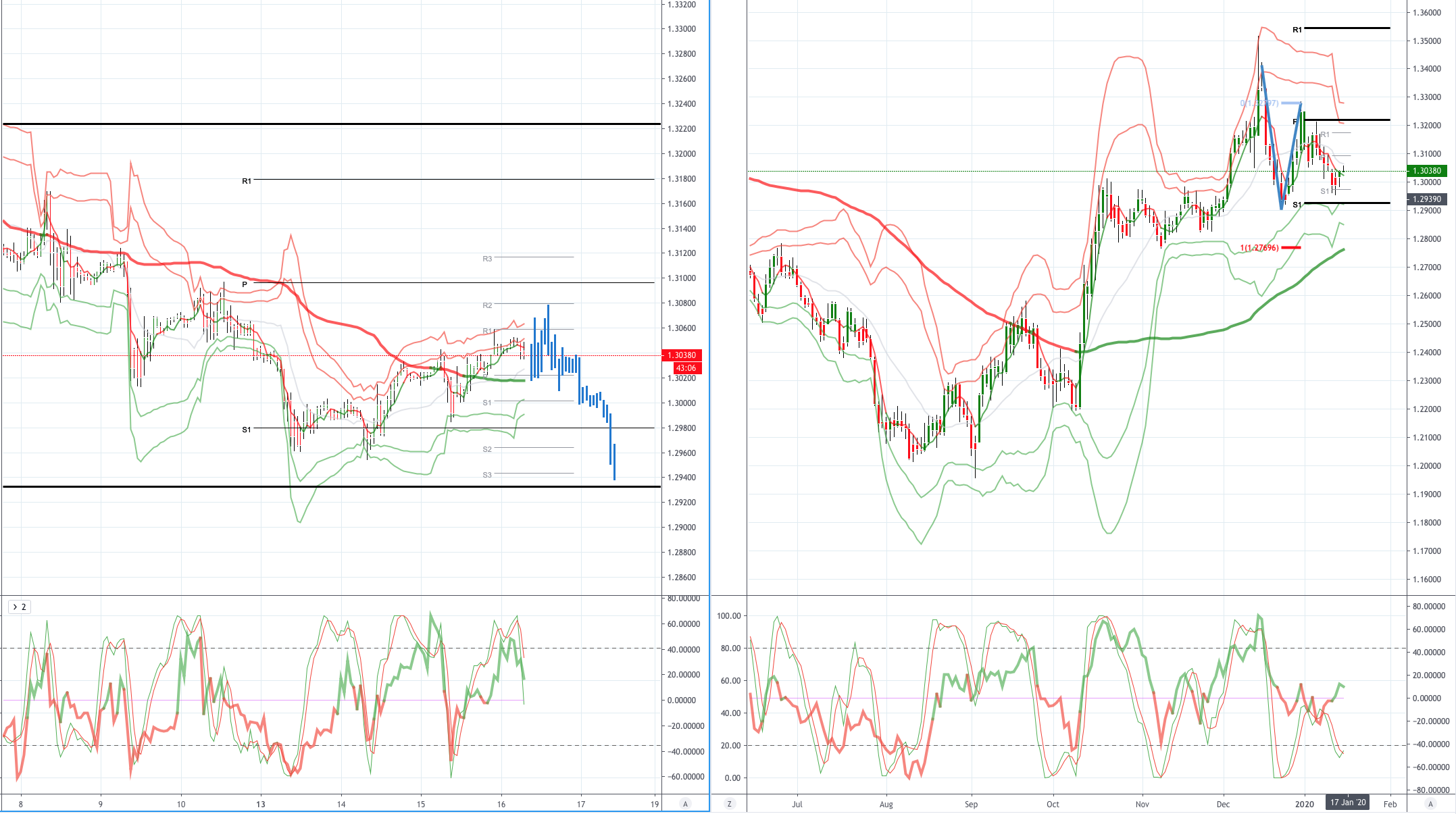 USDJPY From a technical and trading perspective, the breach of 109.50 provides a window for upside extension to challenge the 110.50 equidistant swing objective.Only a failure back below 109.40 would suggest another upside false break and return to well trodden range. Note significant sentiment divergence developing which will likely be addressed in the with consolidation/correction in the near term 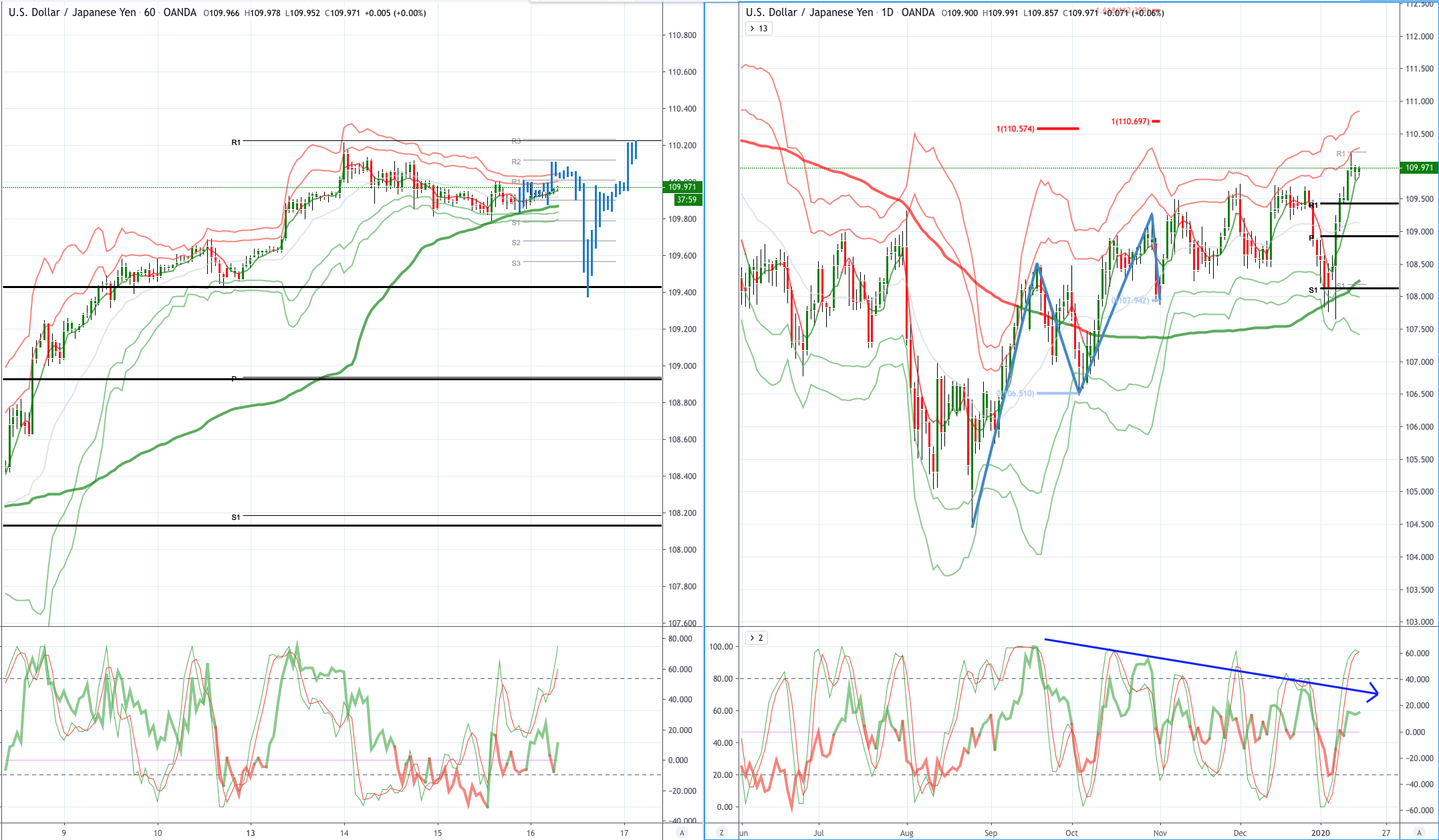 AUDUSD From a technical and trading perspective, anticipated test of .6840 plays out as does profit taking here as we test symmetry swing support. There is a window for prices to base here and develop a platform for a correction to retest .6940 from below, a closing breach of this level will encourage bullish sentiment. A failure to establish ground above .6940 will likely see newly minted longs throw in the towel opening another test of .6840 bids 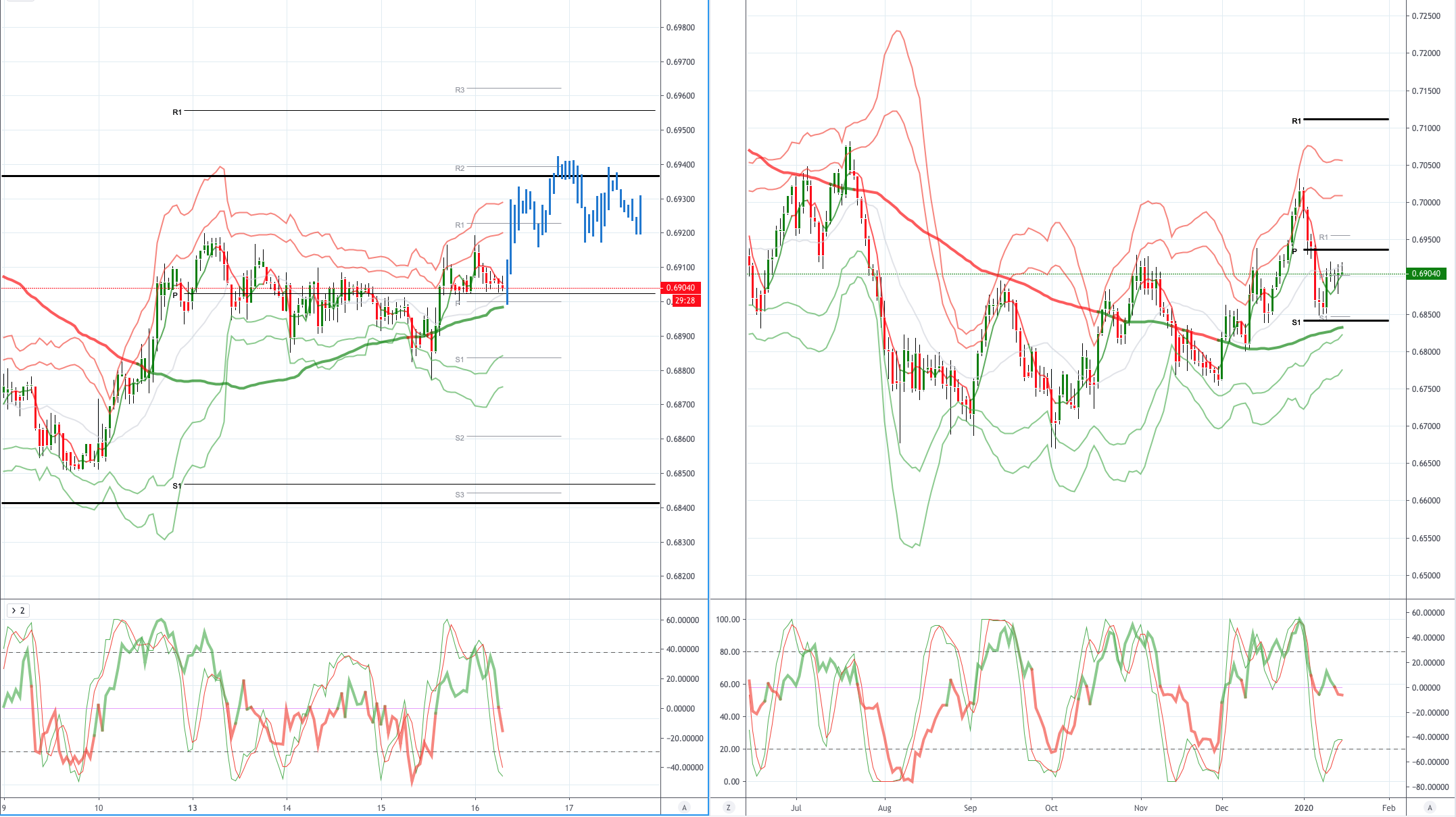 High Risk Warning: CFDs are complex instruments and come with a high risk of losing money rapidly due to leverage. 71% and 68% of retail investor accounts lose money when trading CFDs with Tickmill UK Ltd and Tickmill Europe Ltd respectively. You should consider whether you understand how CFDs work and whether you can afford to take the high risk of losing your money.
Written by Patrick Munnelly
Patrick has been involved in the financial markets for well over a decade as a self-educated professional trader and money manager. Flitting between the roles of market commentator, analyst and mentor, Patrick has improved the technical skills and psychological stance of literally hundreds of traders – coaching them to become savvy market operators!
Previous Post