English
Deutsch
中文
Русский
Español
العربية
Polski
Tiếng Việt
REAL TIME NEWS
Loading...
Biden’s lead in polls declined last week, albeit slightly, which still kept markets under pressure. The event which jumps into the foreground this wee...
RBC Capital Markets Week ahead: The last US presidential debate before the election occurs this Thursday. US House Speaker Pelosi set a Tuesday deadli...
Gold Gold prices have started the week in a relatively subdued manner with light flows noted over the European session so far on Monday. The main driv...
In this Weekly Market Outlook 19-10-20, our analyst looks into the trading week ahead, possible market moving data releases across the globe and the t...
Daily Market Outlook, October 19, 2020 Most equity markets have made a positive start to the week across the Asia Pacific, buoyed by optimism around ...
Chart of the Day AUDUSD AUDUSD Potential Reversal Zone - Probable Price Path AUD: Australia’s response to Covid-19 has been exceptional among G10 cou...
Good day,The Russian ruble should drop till the psychological level of 77.00 and uptrend, and then target the level of 80.00. The level of 77.00 has a...
Monday, October 19, 2020 - China's September GDP and industrial production is due on this day, as well as minutes of the recent RBA meeting. The Centr...
The European Central Bank should follow the lead of the Fed and choose rising household incomes as the underlying policy target, even if inflation tem...
US and EU equity markets show signs of stabilization after Thursday feast of bears. SPX futures touched 3440 level, which was the suspected point of t...
Weekly Live Market Analysis In this week's live market analysis session we reviewed our DXY fractal market map as it continues to give excellent insig...
"Lasting Damage" In its latest set of economic forecasts released this week, the International Monetary Fund struck a firmly dovish tone. The IMF warn...
Daily Market Outlook, October 16, 2020 Risk tone was subdued, as investors continued to weigh prospects of more US fiscal stimulus and rising global ...
Key Points From This Week UK Introduces Fresh Lockdown Measures The UK PM announced a new three tier lockdown system this week range in levels of sev...
Biden Maintains Lead Over Trump As the US elections draw closer, the gap between President Trump and Democrat candidate Joe Biden continues to widen....
Crude Traders Increase Upside Bets The CFTC COT institutional positioning report showed that WTI traders increased their upside exposure in oil last w...
As expected, US equities extend their pullback to more comfortable buying levels. After the red session on Wednesday, S&P500 futures continued their ...
Daily Market Outlook, October 15, 2020 Asian equity markets are mostly lower this morning following declines yesterday in Europe and on Wall Street. ...
Good day, The USD/RUB pair has tested the psychological level of 77.00, jumping to target the price of 80 Russian rubles against 1 USD. So far, the l...
Chart of the Day AUDUSD AUDUSD Potential Reversal Zone - Probable Price Path AUD: Australian home loan surged in August: Home loans approval value be...
Daily Outlook

Asian equity market is mostly higher, although Japan is down. August readings for China industrial production, retail sales and fixed investment all beat expectations suggesting that its post-lockdown economic rebound is continuing. The minutes of the Australian central bank’s last policy meeting said that the economy’s recovery was likely to be uneven. They regard the Aussie dollar as fairly valued but think that a lower rate would provide support to the recovery.

As expected the UK government won last night’s vote in the House of Commons on the Internal Market Bill despite a number of abstentions and two votes against the bill from Tory MPs. The legislation is likely to face further opposition next week when there will be a vote on an amendment to give MPs the final say on implementing key measures of the bill.

Just released data for the UK labour market showed a small fall in employment of12k in the three months to July and a modest rise in the unemployment rate to 4.1% from 3.9% previously. The timelier claimant count reading rose by 73.7k in August, suggesting that the unemployment rate is set to rise further. Many observers are expressing concern that unemployment may rise sharply in the autumn once the government’s furlough scheme expires. As a result there is growing pressure on Chancellor Sunak to consider a selective extension of the scheme. He is set to be quizzed on this and other matters in the House of Commons today.

The German ZEW survey will provide one of the first gauges of the strength of the Eurozone economy in September. As a survey of financial analysts it can be less useful than the PMI and IFO surveys due next week. However, it gets attention for its timeliness and the expectations component has often proved a useful leading indicator. Expectations rose to its highest since 2003 in August, expect some slippage in September reflecting concerns that the economy’s rebound may be slowing.

In the US, the New York Fed manufacturing survey for September and official industrial production data will both provide updates on the factory sector. Look for a rise of 0.8% in the official reading for August, down from 3.0% in July. However, the Empire State survey may rebound modestly in September after falling very sharply in August.

Early Wednesday, UK price data for August is expected to show a sharp drop in annual CPI inflation to 0.0% from 1.0% in July, with the risk of a negative result. The drop primarily reflects the impact of the temporary cut in VAT for the hospitality sector and the ‘Eat Out to Help Out’ scheme. Inflation is likely to pick up modestly in subsequent months as the impact of these initiatives start to fall out but it may stay below the government’s 2.0% target for many months.

EURUSD Bias: Bullish above 1.18 bearish below

EURUSD From a technical and trading perspective,test of 1.1750 trendline attracted fresh bids, as 1.18 now acts as interim support look for a test of offers and stops above 1.1950

Flow reports suggest downside bids into the 1.1740-60 congested sentimental area with increasing bids into the 1.1720-00 level weak stops on a dip through the 1.1680 area for the prospect of  a deeper move through to the 1.1500 level before stronger bids start to appear and all that is available is possible congestive sentimental bids, topside offers light through to the 1.1850 level and beyond cleared by yesterday’s rush high will likely see offers beginning to build around the 1.1900-20 area with very little in the way of stops likely for the moment until testing the 1.1950 area where stronger offers start to appear and continue through to the 1.2000 level and the point where the EU start to make noises again. 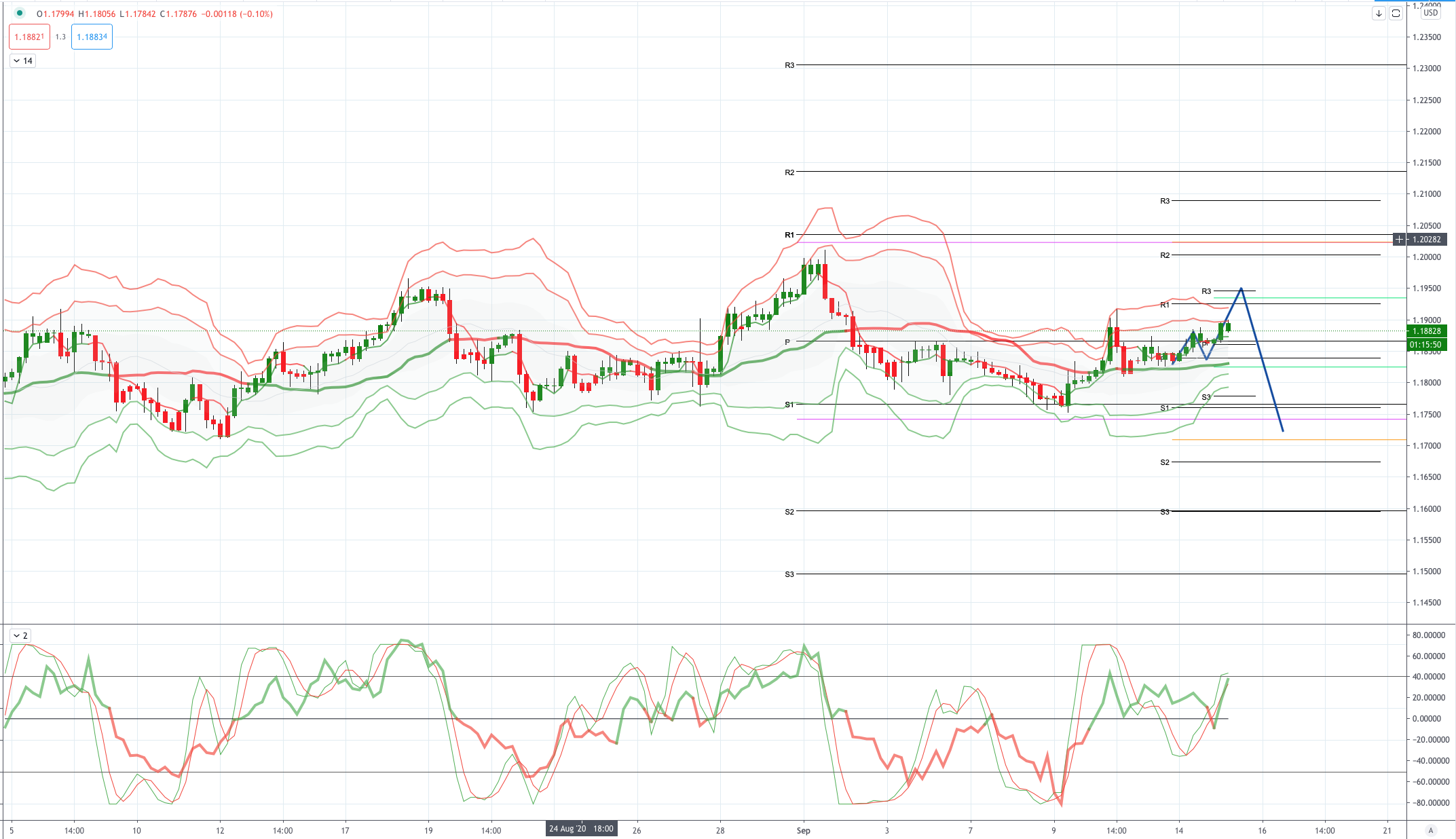 GBPUSD From a technical and trading perspective, test of the pivotal primary trendline support at 1.2830/50 stalls downside for now, however as 1.3050 acts as resistance look for renewed downside to target 1.26 next 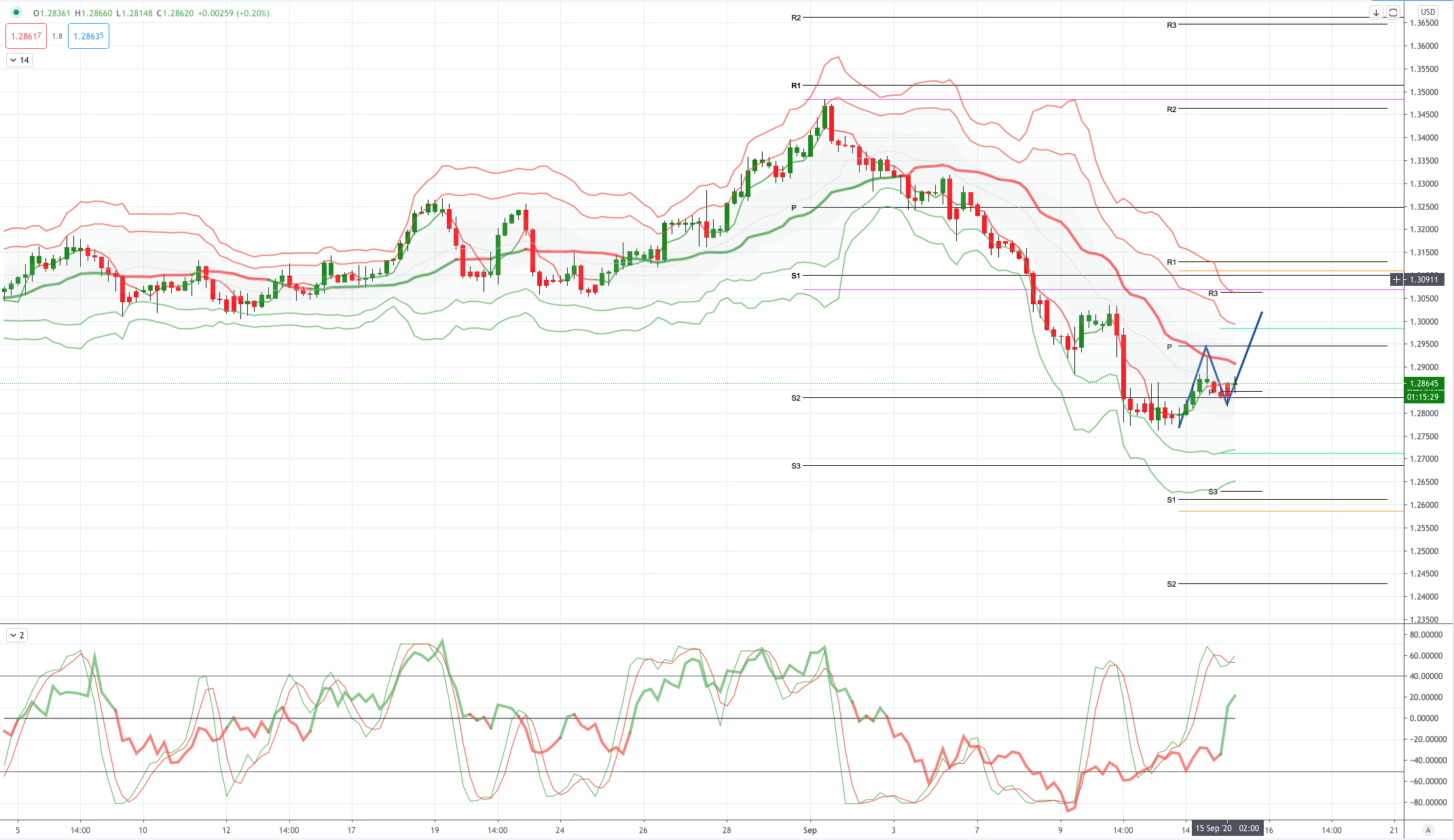 USDJPY Bias: Bearish below 106.50 Bullish above

USDJPY From a technical and trading perspective, as 106.50 acts as resistance look for another test of  support at 105.50 failure to find sufficient bids here will expose 104.18 again. 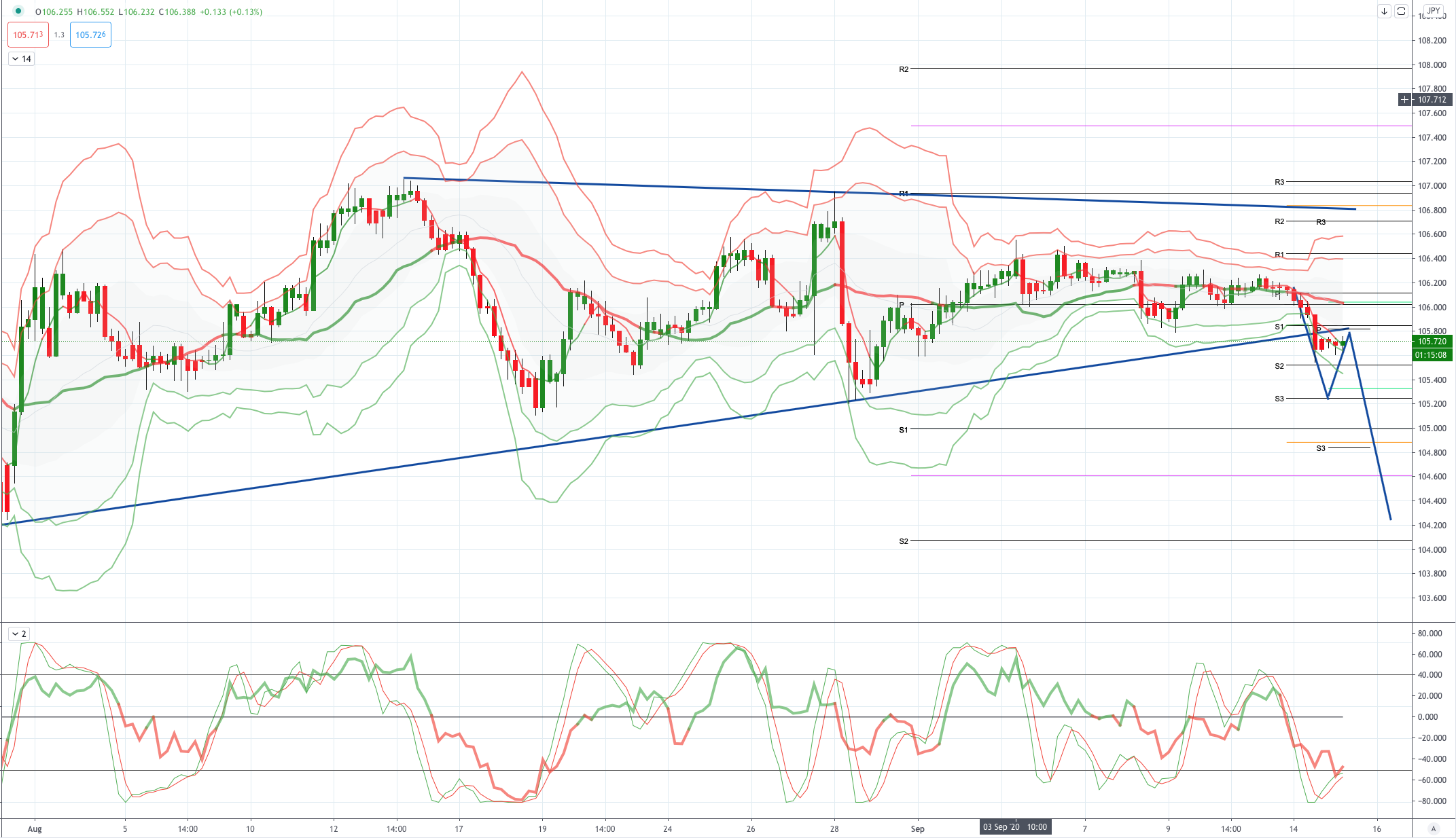 AUDUSD Bias: Bullish above .7250 Bearish below

AUDUSD From a technical and trading perspective, as .7220 now acts as support, look for a test of psychological .7500. Only a daily closing breach of .7220 would concern the bullish thesis opening a retest of .7100. 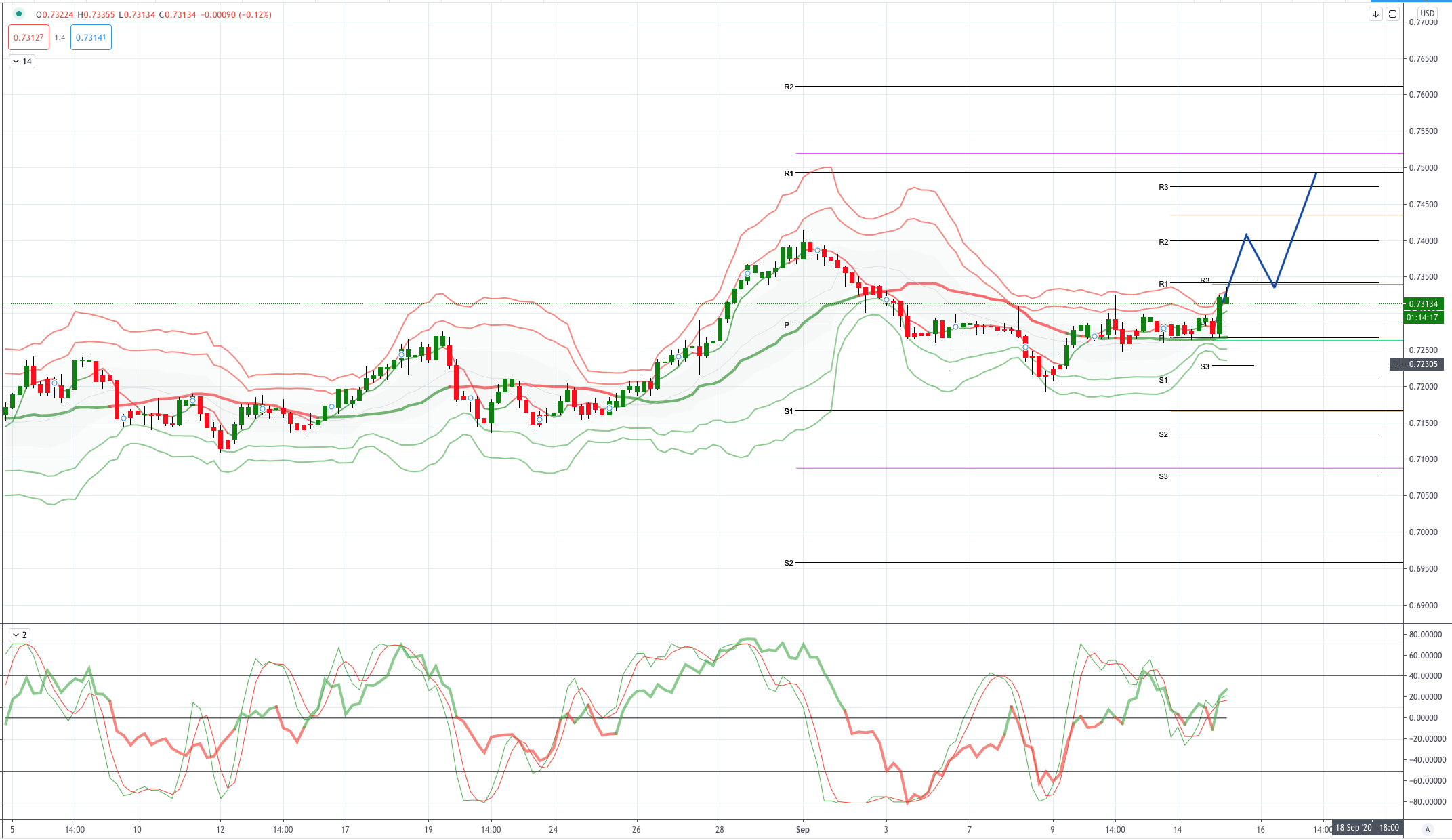 Chart of The Day USDCHF

Last Chance for Trump to Narrow the Gap

Chart of The Day Audusd

Usd/rub Keeps Targeting the Level of 80!

Key Economic Events for the Week Ahead

Time to Favor Value Over Growth Stocks? Goldman Argues That This Is the Case