Did the Fed Make too Much Quantitative Tightening?

The Fed's primary technical task is to control borrowing costs in the money market, but does it always manage to do this? Yesterday's occurrence on the repo market once again showed that even the omnipotent Fed needs to be alert.

Money market liquidity, available for short-term lending between banks, unexpectedly decreased so much that interest rates on overnight loans jumped to 10%, which is almost four times higher than the current rate on federal funds. The Federal Reserve Bank of New York had to urgently announce a REPO operation (for the first time since 2008), then abandon it due to technical difficulties, but in the end make an emergency infusion of funds for $53 billion. After that, the cost of borrowing in the repo market returned to normal level: 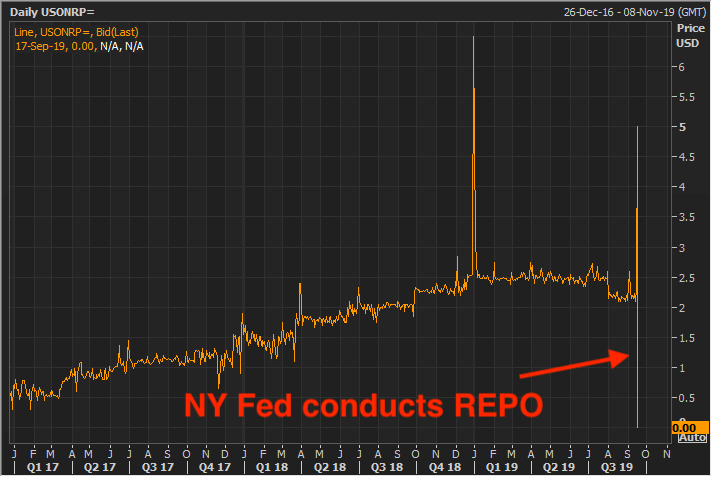 The true reason for the spike remains a matter of debate, but market participants agree that this was preceded by two factors of a sharp increase in demand for liquidity, which coincided in time: corporations withdrew funds from accounts in the money market to pay quarterly tax bills, and investors who bought earlier treasury bonds from the Treasury auction were supposed to settle up yesterday.

The short-term loss of control over the interest rate were also facilitated with the Fed's rapid balance sheet deflation: with the beginning of QT at the end of 2014, excess reserves of banks (which serve exactly the purpose of short-term interbank lending) almost halved:

The less excess reserves on the accounts of the Fed and the higher their concentration (uneven distribution among banks), the greater the premium that a bank in need of emergency liquidity will be ready to pay. However, banks always have the opportunity to borrow from the Fed through a discount window (at a more reasonable rate than observed yesterday), so yesterday’s episode should be considered as pure coincidence, the result of short-term spontaneous demand spike.

A significant reduction in excess reserves barely matches the Fed's stated approach of controlling interest rates in the money market through an abundant reserves system. A further decrease in banks' excess reserves can lead to an increase in cases of money market rates getting out of control (where EFFR - IOER> 0). To prevent this, the Fed can return to the so-called standing repo facility (aka flexible QE), i.e., automatic repo, available only to a limited number of market participants.

An incident in the repo market allows us to look at QE from a fundamentally new perspective - a possible means of regaining control of monetary rates. The main question that Fed politicians should be worried about right now is whether it was enough to just stop the quantitative tightening (i.e., selling assets from the balance sheet) to stop the withdrawal of excess reserves of banks from the Fed deposits, which apparently worsens control at the rate. To solve this problem, the Central Bank will probably have to resume purchases of treasury bonds from the market, but there is a risk that the market will perceive this as something more than a technical adjustment.

We look forward to questions from journalists at the Fed meeting today, in particular about how the Fed is going to prevent such incidents in the future.