English
Deutsch
中文
Русский
Español
العربية
Polski
ภาษาไทย
Tiếng Việt
Portuguese
REAL TIME NEWS
Loading...
The Non-Farm Payrolls report was disappointing, but the Fed seems unrelenting in its quest to move towards a higher pace of QE roll-out. This is proba...
The European Central Bank at its December meeting may agree on monetary policy for a relatively short period due to heightened uncertainty, but should...
Among all the themes that drove the markets this week, two main ones can be distinguished. The first is uncertainty caused by the new strain, which, b...
NFP Up Next The US labour reports for November are due today and will be the main data focus for the week. On the back of the Fed’s tapering announce...
COVID Uncertainty Dominates The uncertainty around the recently announced Omicron COVID-variant has been well reflected in the price action we’ve see...
COVID Fears Return Another week winds down, bringing us just that bit closer to the end of the year. It’s been a week of uncertainty for most, given ...
Credit Agricole Asia overnight Recorded cases of omicron are showing a greater geographical dispersion with cases now being recorded in Malaysia and...
Daily Market Outlook, December 3, 2021 Overnight Headlines Congress Thwarts Shutdown After Clash Over Vaccine Mandate Biden Lays Out Multi-Pronged P...
Type: Bullish Bounce Key Levels:Resistance: 0.9263Pivot: 0.91866Support: 0.91676 Preferred Case: Prices are on bullish momentum and consolidating i...
Type: Bullish Bounce Key Levels:Resistance: 113.674Pivot: 113.048 Support: 112.701 Preferred Case: Prices are consolidating in a triangle. We see p...
Type: Bearish Reversal Key Levels:Resistance: 58331Pivot: 57091.15Support: 53594.17 Preferred Case: Price is reacting in between a descending chann...
Type: Bullish Bounce Key Levels:Resistance: 0.63337Pivot: 0.62329Support: 0.61686 Preferred Case: We can expect that price bounce at the pivot in l...
The news flow concerning the new covid strain continues to keep investors in suspense, with the VIX trading at its highest level since May 2020 (28-3...
OPEC Up Next The big focus for markets today, away from any Omicron updates, is the OPEC+ meeting taking place in Algeria. The meeting has been calle...
Bailey Warns Of Residual Risks Expectations that the Bank of England will hike in interest rates before the year end seemed to take another knock yes...
Oil Traders Cut Longs The latest CFTC COT institutional positioning report shows that oil traders cut their net long positions again last week with t...
CIBC Key Headlines Bounce in the US equity futures, optimism is back, Moderna could have a COVID-19 booster shot targeting the omicron variant test...
Daily Market Outlook, December 2, 2021 Overnight Headlines US Health Officials Find First Us Case Of Omicron Variant In California US Shutdown Risk ...
Good day, Russian ruble underwent correction and approached the level of 74.00. Currently, it is trying to jump. In principle, the asset’s price migh...
Type: Bearish Reversal Key Levels:Resistance: 69.834Pivot: 68.48Support: 64.678 Preferred Case: Prices are consolidating in a parallel channel. We ...
Fund Analysis

Goldman Sachs and Deutsche bank warn investors about a pipe-dream

Goldman Sachs has recently been a token of vocal opposition to market consensus regarding the path of the Fed interest rate. In the context of capital flows into defensive assets in the last week of May (the yield of 10-year US gov. bond fell from 2.4 to 2.1%, gold jumped from $ 1,280 to $ 1,340), Goldman, with its rate hike forecasts, looked like an absolute outsider. More recently, German colleagues from Deutsche Bank joined the Goldman camp, warning customers that the three rate cuts priced in the asset valuations may turn out to be a false dream. Now that the tectonic shift in expectations has come to an end (as can be seen from the stabilization of 10yr yield near 2.1%), it may be useful to take into account alternative points of view on the Fed's short-term plans, as well as analyze the arguments that support them. 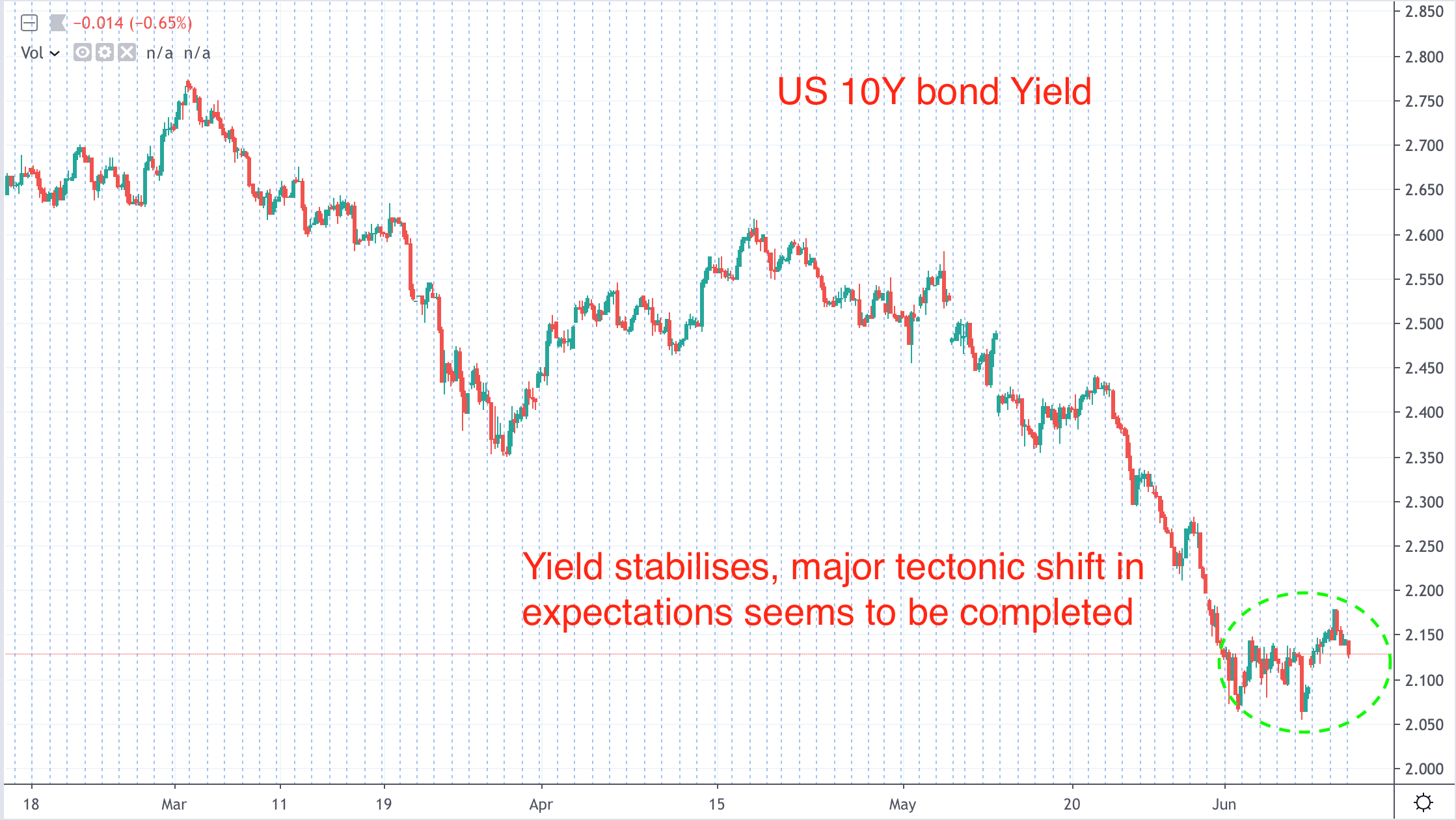 To explain their point, Deutsche Bank analysts shifted away from speculative attempts to justify why a narrowing number of signals of US expansion should outweigh the threat of recession due to a trade war and a bunch of other weak data, suggesting a much simpler idea – to check the accuracy of market assumptions. Using data from 2001, they compared market expectations for changes in interest rates with actual rate cuts or hikes and came to surprising conclusion: the market is almost always wrong. 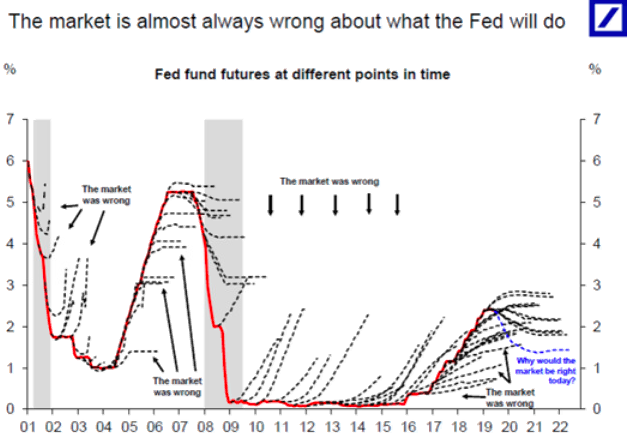 In the picture above, the red line shows the interest rate path of the Fed from 2001 to the present. The dashed lines show market expectations of the interest rate derived from futures trading on interest-bearing assets like US Treasury bills. It can be seen that in the overwhelming number of cases, the red and dashed lines do not match, which tells us that current changes in the rate have diverged from expectations. From this, German bank experts concluded that the market is often wrong, so relying on the current expectations of three rate cuts should be done with caution.

In my opinion, the mini-study of Deutsche Bank is not without flaws. First, judging by the blue line (expected rate trajectory till 2022), each dashed line probably represents point estimates of the rate trajectory extracted from the futures market, that is, estimates for a specific date. Like what 1M, 3M, 1Yr, 2Yr interest rates are expected by the futures market on 12 December 2009? Plotting these rates against time we get one dashed line.

It is reasonable to assume that the error of market expectations of interest rate will grow faster than time (quadratically, for example, from 2009 to 2016), this is evident from the fact that at the beginning the dashed line and the red line coincide for a short time and then begin to diverge with acceleration. In addition, point data selection is subject to the problem of chaotic tides and ebbs of investors in safe heaven assets, and at such times trading does not reflect interest rate expectations. Since we don’t know what dashed lines precisely mean we can switch our critics on the wording “almost always wrong”. Given the number of observations (about 50 dashed lines), the statement “almost always” is rather subjective and there is no reason to believe that the current expectations of the three rate cuts will not be included in the group of “correct predictions”.

In any case, the market has successfully convinced itself that the Fed will soon begin to cut rates, the S&P 500 is heading towards the 3000 level again, and the VIX is returning to the long-term average. But in fact, the Fed maintains a neutral position and will probably prefer to retain the optionality at a meeting in June, before the meeting of the leaders of China and the United States to discuss the trade deal. Accordingly, there is a dangerous imbalance of expectations towards Fed easing, which is basically not backed by fundamentals (like strong Fed hints) and stock market growth may face serious challenges at the end of June.

High Risk Warning: CFDs are complex instruments and come with a high risk of losing money rapidly due to leverage. 71% and 61% of retail investor accounts lose money when trading CFDs with Tickmill UK Ltd and Tickmill Europe Ltd respectively. You should consider whether you understand how CFDs work and whether you can afford to take the high risk of losing your money.
Written by Arthur Idiatulin
Arthur is a stock market and currency expert with a vast experience in market research and investment consulting. Dedicated Forex trader and financial practitioner, keen on testing new trading techniques and investment strategies.

Lagarde: Ecb Is Not Ready to Give Long-term Policy Pledges

Nfp May Cause Short-term Dollar Push

How Much Will Omicron Overshadow Today's Nfp Release?

Fomo Friday: Audjpy On The Rocks