English
Deutsch
中文
Русский
Español
العربية
Polski
Tiếng Việt
Portuguese
REAL TIME NEWS
Loading...
NZD Soars The New Zealand Dollar has broken out to its highest levels since April 2018 this week. Benefitting from the broad recovery in risk appetit...
Powell Testifies US equities were shunted lower yesterday in response to comments made by chairman of the Federal Reserve, Jerome Powell. Testifying...
A downward correction in the crude oil market, after recovery of output and refinery operations on the Gulf Coast, was short-lived. Brent quotes rose ...
Powell to Testify Today Fed chairman Jerome Powell will be in the spotlight when he testifies before the Senate Banking Committee later today. The Fe...
US Inflation Expectations Cap S&P Rally Global equities benchmarks are broadly rebounding against recent losses over the European morning on Tuesday....
A key trading theme on Monday has been renewed rise in market risk-free interest rates in the US. The yield on 10-year Treasury bond after short conso...
RBC Capital Markets Week ahead: Central bank communication dominates the week, with Fed Chair Powell's Congressional testimony (Tuesday & Wednesday)...
Gold Gold prices fell to their lowest level since July last week amidst an uptick in US inflation expectations. An unexpectedly strong January US Re...
In this Weekly Market Outlook 22-02-21, our analyst looks into the trading week ahead, possible market moving data releases across the globe and the t...
Daily Market Outlook, February 22, 2021 Market risk sentiment has started the week on a cautious note, with equities across the Asia-Pacific region s...
Good day, The price of gold has closed with a doji last Friday, facing a very strong support at the level of 1767.00. Hence, there is a potential tha...
On Monday, investors will look closely at the Bank of China's benchmark interest rate decision to see if the central bank is trying to maintain its st...
South African advanced on Friday in anticipation of the Treasury budget message next week, while losses in most other emerging market currencies were ...
The recent surge in demand for USD fueled by rise in Treasury yields seems to be abating as the outflow from the Treasury market slows. The 10-year T-...
Weekly Live Market & Trade Analysis In this week's live market and trade analysis session, we assessed the technical price patterns of over 20 charts ...
Dollar up, Dollar Down It’s been a fairly volatile week for USD with the Dollar Index rallying off the initial lows of the week before reversing and...
Key Points from This Week UK CPI Improves Following on from the news that the UK avoided a double dip recession in the final quarter of 2020, ther...
Daily Market Outlook, February 19, 2021 Market risk sentiment looks to be ending the week on a soft note, with equity markets across the Asia Pacific...
The minutes of the Fed meeting brought relief to equity investors as the US Central Bank made it clear that it acknowledges the fact that inflation is...
Good day, The price of the Euro is pulling back to the broken downtrend, which is also a flag. The asset might retest the level of 1.2000 soon. The p...
Fund Analysis

Global index of activity in the manufacturing sector, calculated by JP Morgan, shows the worst performance in 6.5 years as the gauge has been in the downward trend since early 2018, diving into contraction zone for the last two months: 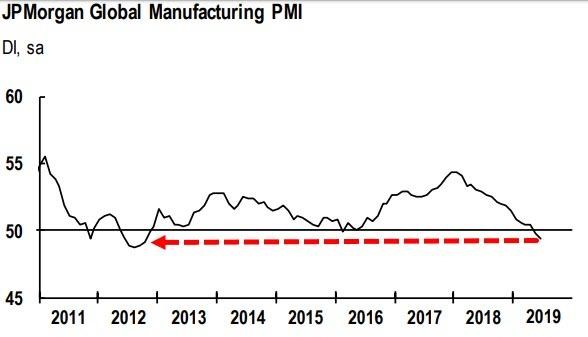 The episode of slump to 50 points by the second half of 2016 was obviously associated with an oil shock, but in 2018 a wave of protectionism initiated by the United States was also added as a powerful downside factor.

The index is probably calculated as some average between local PMIs weighted by the contribution of local production to the global one. On the basis of the relevant sub-index data, a global estimate of employment in the manufacturing sector is noteworthy, which, in the absence of inflation, reflects the channel for the distribution of shocks in world trade to consumer spending and confidence. The employment index shows negative increments for several months in a row: 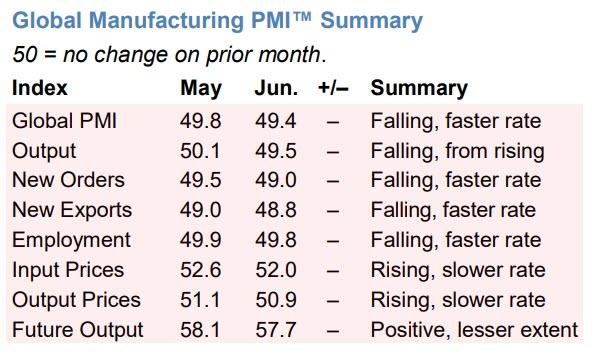 The “leading” indicator of new orders also dropped from 49.5 to 49.0 points, ensuring that producers will struggle to maintain production volumes in the near term.

Among the 30 countries for which PMI estimates were available, 18 countries reported a negative change in PMI in June. Japan, Germany, Britain, China, Taiwan, South Korea and Russia found themselves in the “contraction group”. The United States, Brazil, India and Australia have registered moderate gains in June but their share of employment in the production sector is smaller than in the countries that posted declines what adds significance to the weak employment index.

More than simply a trade truce

XAGUSD bounced from support, potential for a further rise!

Room for an Oil Rally? Depends on the Timeframe!

Powell In Focus As Us Yields Soar