What is the relationship between gold and interest rates? Should we expect the development of correction?

Three meetings of central banks — the Fed, the Bank of Japan, and the Bank of England — will take place this week, and the first remarkable reaction in the market was a brisk liquidation of gold holdings. We saw the onset of this trend on Friday, when a relatively upbeat print of May retail sales started to feed into growth expectations. However, the fundamental effect of consumer data can be easily confused with purely technical retracement since the gold was testing resistance level formed more than a year ago: 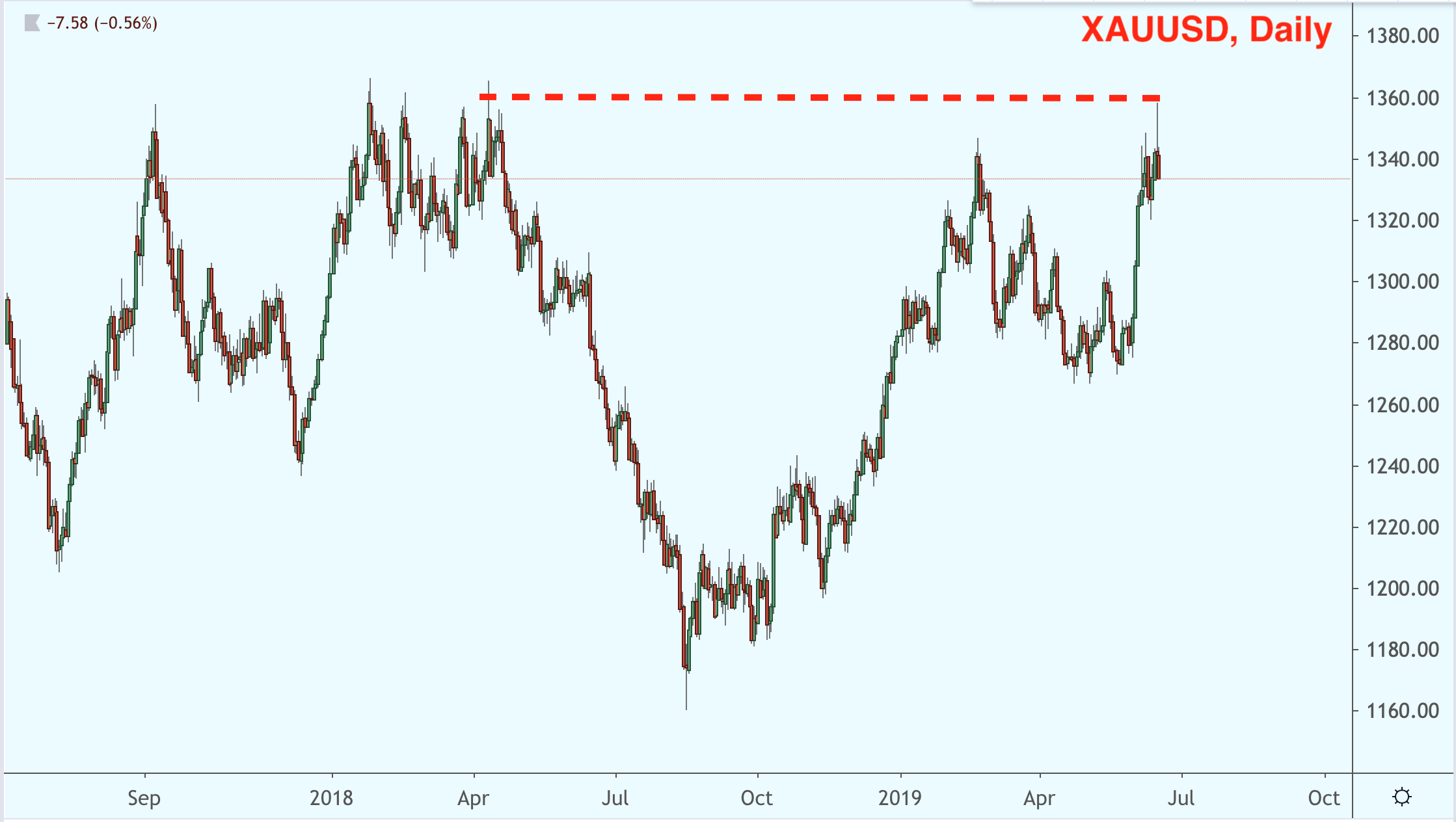 On the daily chart, “punctures” (tails of candles) are also noticeable at the pivot points of the price. Abstracting from technical patterns, these punctures indicate the increase in volatility within a day, i.e., “high involvement” of both sellers and buyers, which hampers the development of the current trend.

The rise of gold at the end of May, which also extended into the early June, was due to dovish reassessment of trade war outlook and, as a result, an increase in the chances of a threefold reduction in the Fed rate. The need to link gold movements primarily with Fed policy and then to risk tolerance and other factors may be explained as follows: Since gold is an non-interest bearing asset (it doesn’t offer cashflows, only capital gains), its investment appeal is inversely proportional to the opportunity cost of holding it, i.e.. interest rate on risk-free instruments (for example, US T-bills). However, to correctly estimate opportunity costs, it is necessary to take into account the expected inflation, since the investor should also be concerned about the purchasing power of money in the future. It is logical to assume that if the bond rate is 2%, and the expected inflation is 2.5%, then by investing in the bonds, the investor will “lose” money (he will buy a smaller basket of goods in the future than now).

The US government bond market offers us a convenient tool for reflecting this relationship— US Treasury bonds indexed for inflation. Take, for example, the yield on 10-Yr bond and compare it with gold quotes: 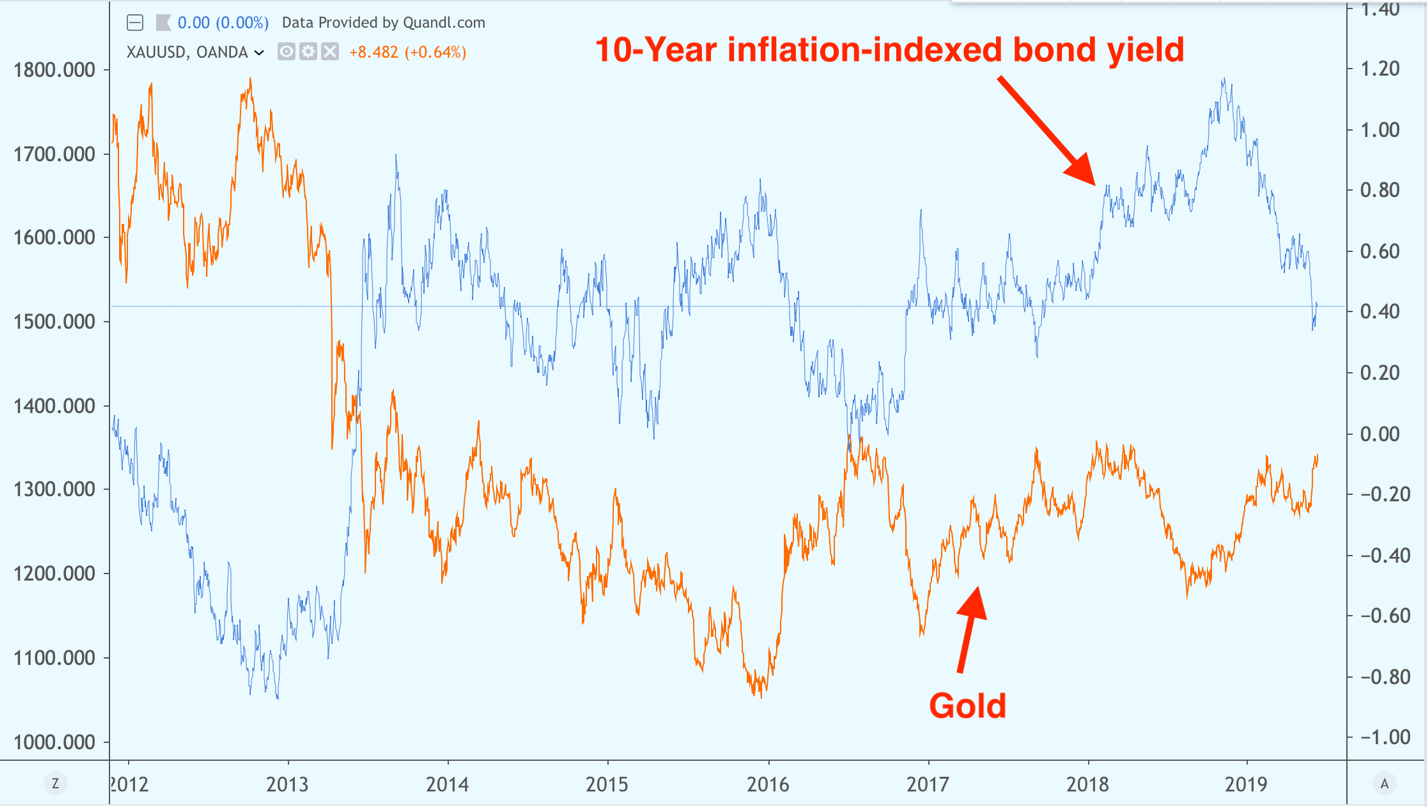 Retail sales in the United States, published on Friday, slightly improved the situation after weak inflation on Wednesday and a new round of contention between China and the United States. Sales in the control group (with a focus on discretionary purchases) and excluding fuel, cars and parts increased in May by 0.5%, while April figures were revised upwards. It is noteworthy that the April figure was revised from -0.2% to + 0.3%. Thus, retail sales grew three months in a row. Considering that the Fed did not give a clear signal to lower rates and only reported “willingness to do everything necessary to maintain expansion,” the increase in the chances of three rate cuts by February 2020 seems premature, and the likelihood of a retreat in expectations rise after the Fed meeting (which is likely to take neutral stance). The main component of GDP, consumption, continues to keep the economy afloat, without causing the Fed to have a sense of urgency in easing policy, although there are definitely plans for that. Manufacturers also were not baffled by Trump's trade threats, increasing output in May by 0.2% for the first time in 2019. Nevertheless, futures on the federal funds rate estimate the chances of a rate reduction in July at 67%, but a month ago they were only 23.2%.