English
Deutsch
中文
Русский
Español
العربية
Polski
Tiếng Việt
REAL TIME NEWS
Loading...
COVID Concerns Pressuring ECB With concerns over the developing second wave of COVID-19 reaching fever pitch in the eurozone, the market is eagerly a...
Markets Rocked By COVID Panic Global equities benchmarks suffered a day of heavy losses yesterday as concerns over the growing second wave of COVID-19...
Daily Market Outlook, October 27, 2020 Equity markets pared losses but remained broadly lower in Asia, following sizeable falls at the US close. Euro...
Chart of The Day US500 (S&P500) US500 (S&P500) Potential Reversal Zone & Probable Price Path Risk off overnight as markets grappled with the fading p...
FX Options & Positioning FX option expiries and related delta hedging flows can influence FX price action, so it's worth knowing where the bigger stri...
US index futures slipped into negative territory on Monday as the greenback went on a massive offensive (gained both against major and EM currencies)....
Credit Agricole EUR: We remain constructive on the EUR in the wake of the EU recovery fund introduction, which should help minimise the break-up tail ...
Gold The gold market has started the week in the red, extending the losses seen into the bank end of last week as the US Dollar receives better demand...
Daily Market Outlook, October 26, 2020 Equity markets began the week in Asia on the back foot, as investors assess prospects of a vaccine to tackle t...
In this Weekly Market Outlook 26-10-20, our analyst looks into the trading week ahead, possible market moving data releases across the globe and the t...
Good day, The USD/RUB currency pair broke the horizontal level of 77.00 and uptrend. This asset will most likely drop, targeting the level of 73.00. ...
On Monday and Tuesday, the focus will be on the US consumer - the market will get reports on US new home sales, durable goods orders and consumer sent...
EU economy could snap post-pandemic gains due to the second wave of coronavirus cases, showed an October survey of Reuters economists. According to t...
The second presidential debates held on Thursday was more orderly than the first, but the contents were broadly the same - mutual attacks and undermin...
Weekly Live Market Analysis In this week's live market analysis session we reviewed S&P500, DXY, EURUSD, GBPUSD,USDJPY, GOLD & CRUDE in relation to th...
Key Points from This Week COVID Second Wave Intensifies Fears over the rising second wave of COVID-19 intensified this week. The number of new infect...
Candidates Strike More Professional Tone The final US presidential debate last night saw both candidates striking a far more considered and profession...
Daily Market Outlook, October 22, 2020 Speaking last night, US House Speaker Pelosi said that she and Treasury Secretary Mnuchin were “just about the...
The "jingle" from the Congress, Treasury and the US administration about coronavirus aid was hollow again. Controversial messages culminated in Trump'...
Oil Traders Increase Longs The latest CFTC COT institutional positioning report showed that WTI traders increased their upside exposure in crude last ...
Fund Analysis

US equities were unable to develop positive start of Thursday session and bulls ceded ground to sellers later. There may be growing conviction in the market that US lawmakers (both the Fed and Congress) will not be able to enact monetary or fiscal support before the US presidential elections. This is a negative scenario for equity markets which reinforces the case for consolidation.

Yesterday I wrote that the GOP wanted to adopt skinny fiscal package - in the amount of only $300 billion. The vote on it was scheduled for Thursday. The vote failed and it looks like that the talks headed for a dead end.

A break below 3300 points in SPX early in the session today may set persistent corrective tone for risky assets extending for the rest of the session. However, rising US index futures indicate that breaking support won’t be an easy task.

In the economic calendar, the focus is on the US CPI release for August. Core inflation is expected at 1.6%, and the market will be more sensitive to negative deviations from the forecast than positive ones. Market response to accelerating inflation is limited by the Fed's new "patient" inflationary stance (FAIT). Slowing inflation in the US is critical for sentiment, since nothing can be opposed to it yet due to the stalemate in fiscal negotiations. Yesterday's PPI release which beat estimates indicates that inflation pressure could rise in the prices of consumer goods as well.

The report on unemployment claims in the US released on Thursday was a blow to market optimism. The number of unemployed increased for the fourth consecutive week. This is a subtle signal that slack in economic activity is growing in the US. 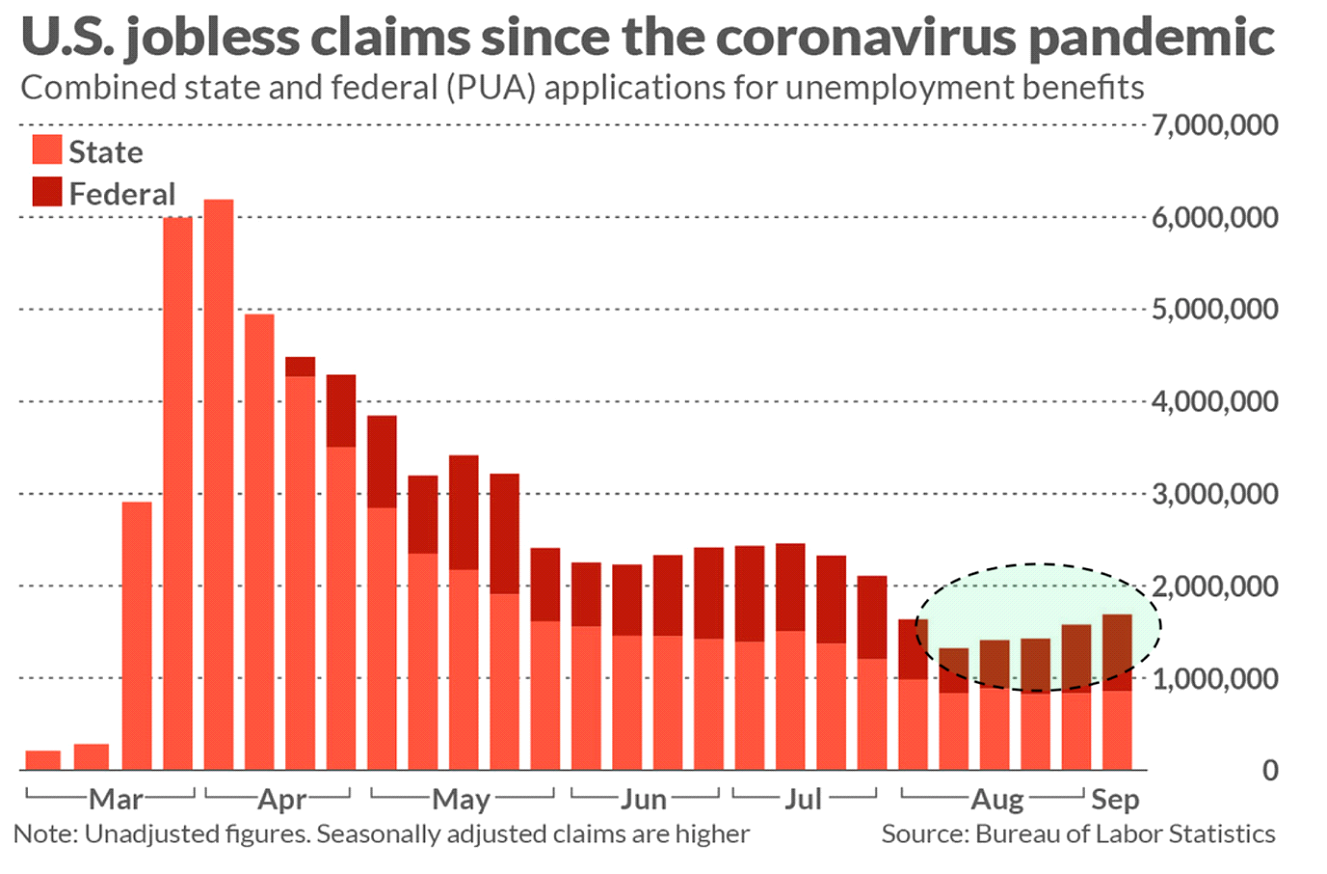 Earlier in this week I wrote that the chance for the resumption of EURUSD rally is high, since the ECB cannot stop the growth of the Euro with any specific measures. This statement can be strengthened by considering key meeting takeaways:

Chart of The Day NZDUSD