Key WTI Headlines Over the Week

Benchmark WTI prices commenced the week with a 20% move north as traders received reports of a drone strike on Saudi Arabian oil processing facilities over the week. The attack was blamed on Iran, with US Secretary of State publicly blaming Tehran for the strike which wiped 5% of global oil supply offline.

The 20% surge in WTI prices highlights the severity of the situation. The oil market is used to output disruptions, though not on the scale of the attacks in Saudi Arabia over the weekend. For example, disruptions in Libya due to rebel attacks atypically impact 200-300kb/pd whereas Saudi Arabia has temporarily lost 5.7mb/pd of crude output.

Iran quickly rebuffed the accusations, cautioning the US that it was prepared for war. Fears over the stand-off between the US and Iran kept WTI underpinned over the first half of the week though prices collapsed midweek as Trump diluted tensions, telling reporters that he was not looking for military conlflict with Iran.

Selling pressure then intensified as Saudi Arabia reported that it had restored 50% of its WTI supply capacity in the 2 days following the strike. The Kingdom, which is the de-facto leader of OPEC, added that it will have restored full capacity by the end of September.

The market will now be focusing on what the losses will mean for OPEC’s production cuts. Saudi Arabia has led the pack in terms of overly adhering to the production cut quotas and in light of the losses suffered, there is a risk this could change.

At the group’s latest meeting in Vienna this month, OPEC sounded bearish on oil prices as it lowered its global demand forecasts for both the current year and 2020. The group is also reportedly considering cutting WTI production further when it meets in December to counter the soft global demand environment.

OPEC member Venezuela continues to experience difficulties in the wake of further US sanctions on the state-run PDVSA group. The US has banned firms from purchasing PDVSA oil along with warning foreign firms of punishment if they deal with or “materially assist” the Maduro government. WTI inventories in Venezuela have now ballooned to over 38 million barrels, their highest level since summer 2018, as a result of the sanctions. However, PDVSA’s client base has shrunk meaning it is unable to move the oil with the majority going to Russia’s Rosneft group which resells to Asia.

Midweek, the EIA followed up on earlier API reports of a US crude inventories surplus, confirming a 1.1 million barrel increase over the last week. This figure was in stark contrast to the expected 2 million barrel drawdown and came with a jump in both gasoline and distillate stockpiles also.

WTI Crude (Bullish above $55, bearish below)

From a technical and trade perspective. WTI is retracing from the week’s highs, moving back towards the yearly pivot at the $55 mark. If price works through bids at the level and moves lower, I will be monitoring a retest of the pivot from beneath to position for a break lower. On the other hand, if we see reversal signals as price moves down to the pivot now, this could set up a nice long opportunity for another move higher. 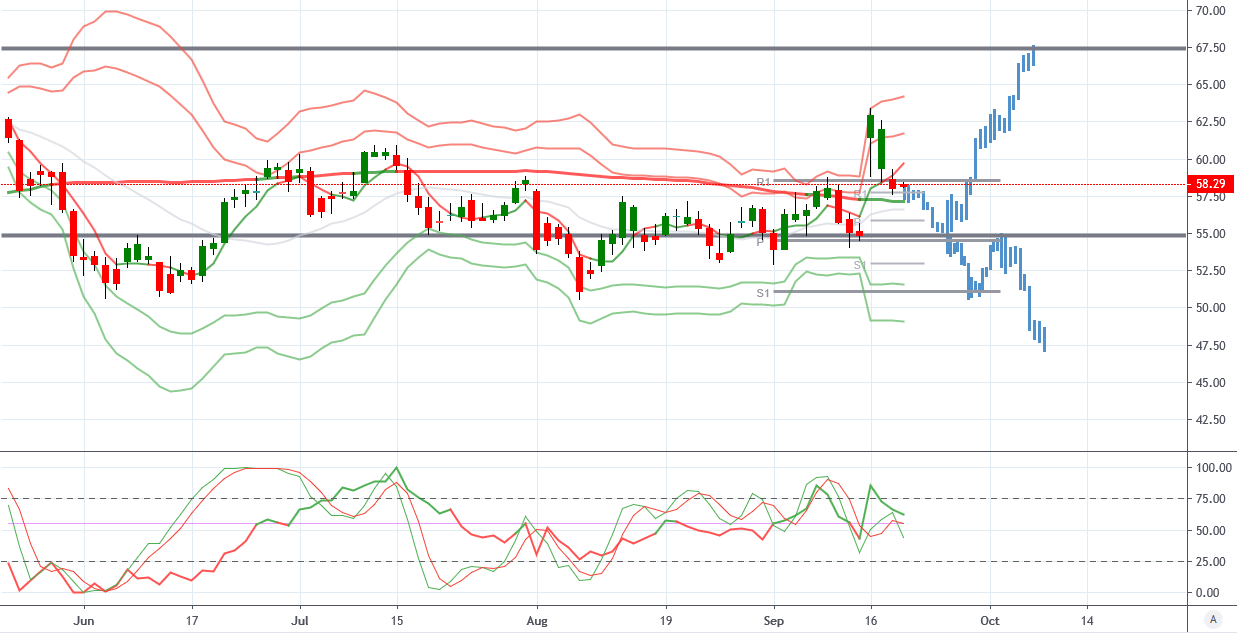 High Risk Warning: CFDs are complex instruments and come with a high risk of losing money rapidly due to leverage. 70% and 66% of retail investor accounts lose money when trading CFDs with Tickmill UK Ltd and Tickmill Europe Ltd respectively. You should consider whether you understand how CFDs work and whether you can afford to take the high risk of losing your money.
Tagged in: #crude, #iran, #opec, #wti
Written by Patrick Munnelly
Patrick has been involved in the financial markets for well over a decade as a self-educated professional trader and money manager. Flitting between the roles of market commentator, analyst and mentor, Patrick has improved the technical skills and psychological stance of literally hundreds of traders – coaching them to become savvy market operators!
Previous Post