English
Deutsch
中文
Русский
Español
العربية
Polski
Italiano
ภาษาไทย
Tiếng Việt
Portuguese
REAL TIME NEWS
Loading...
The Dollar managed to gain a foothold after touching 100-day SMA on Friday, but on Monday the recovery was difficult - the dollar index dangled near t...
GBJPY In Holding Pattern GBPJPY price action is starting to look very interesting here. Price is has been sitting in a tight range just under the 157...
USDCAD Testing Channel Low The sell off in USDCAD over the last week has seen price breaking below key support at the 1.2643 level trading down as fa...
Metals Looking To Move Higher On USD Retreat The metals complex has started the week with a bid tone as both gold and silver attempt to trade to the ...
In this Weekly Market Outlook 17-01-22, our analyst looks into the trading week ahead, possible market moving data releases across the globe and the t...
Citi European Open It was a busier morning today, despite the US MLK holiday, with FX volumes up to 30% more than averages, according to our etrader...
Daily Market Outlook, January 17, 2022 Overnight Headlines US Omicron Surge Spurs New Covid-19 Relief Push In Congress Democrats Make Voting Rights ...
Good day, Since last Friday the price of the Russian ruble is approaching the level of 77. It seems that the price of USD/RUB will hit the level of 7...
Type: Bearish Breakout Key Levels:Resistance: 43478.19Pivot: 42583.45Support: 39760. 93 Preferred Case:Price is abiding to the descending trendline ...
Type: Bullish Bounce Key Levels:Resistance: 0.73115Pivot: 0.7178Support: 0.71406 Preferred Case:Price abiding to ascending channel, signifying overa...
Type: Bullish Bounce Key Levels:Resistance: 1.14799Pivot: 1.13866Support: 1.13185 Preferred Case:Price is approaching our pivot level at 1.13866 whi...
The European Central Bank remains confident that inflation will come down this year but is prepared to adjust policy to meet its inflation target, ECB...
The World Bank on Tuesday trimmedforecasts for economic growth in the United States, the Eurozone and China and warned that high debt levels, rising i...
Dollar weakness this week is more attributable to improved growth prospects and yields on local non-US assets than to a breakdown in Fed policy expect...
US Data In Focus Again The final tier-one data of the week is due over today’s US sessions with US Retail Sales for December due. Following the lackl...
GBP Beats The Bunch So another week comes to an end, and already we’re deep into the middle of January. Times flies when you’re chasing pips! Chattin...
Credit Agricole Asia overnight The threat of tighter financial conditions continues to weigh on investor sentiment. FOMC Vice Chair, Lael Brainard, ...
Type: Bearish Reversal Key Levels:Resistance: 0.73014Pivot: 0.72805Support: 0.72192 Preferred Case:Prices are at a Pivot. We see the potential for f...
Type: Bearish Reversal Key Levels:Resistance: 0.73093 Pivot: 0.72784Support: 0.71990 Preferred Case: Price is abiding to the ascending channel, sign...
Daily Market Outlook, January 14, 2022 Overnight Headlines Fed Officials Nod To March Hike As Inflation Battle Grows Biden Will Nominate Raskin As T...
Fund Analysis

Trump Impeachment Won’t Likely Happen and Here is Why

"Democrats Week" remains the hottest source of trading clues on Wednesday. The call for Trump impeachment sent stock indices to a two-week low, and the increased risk aversion revived the trend up in risk-free assets. The dollar will briefly regain the status of a defensive asset, strengthening against other major currencies.

The anxiety of the markets is not clear though, and here are two strong reasons for that. Firstly, we should take into account that the House of Representatives is controlled by Democrats, but majority in Senate is hold by Republicans. The final word remains with the latter. As you know, the Democrats sunk their teeth into the Trump conversation with Ukraine’s president Zelensky, demanding to release the transcript of the talks. Republican rivals hope to find signs of severe misconduct, excessive pressure from Trump on Zelensky in an attempt to initiate an investigation, which will allow to promote impeachment and hinder the implementation of other Trump initiatives, in particular, economic ones. However, to their great disappointment, Trump authorised the release of complete, unedited transcript of the negotiations, reports Politico.

In addition, Trump ordered to release the complaint of the whistleblower (regarding the fraud of Biden’s son in Ukraine) and the report of the Inspector General, which are at the center of the impeachment situation. Trump is unlikely to have done this if he feared the consequences.

The company providing legal protection to the informant said that he is ready to fully cooperate with the government.

According to the political betting site, the chances of impeachment have plummeted: 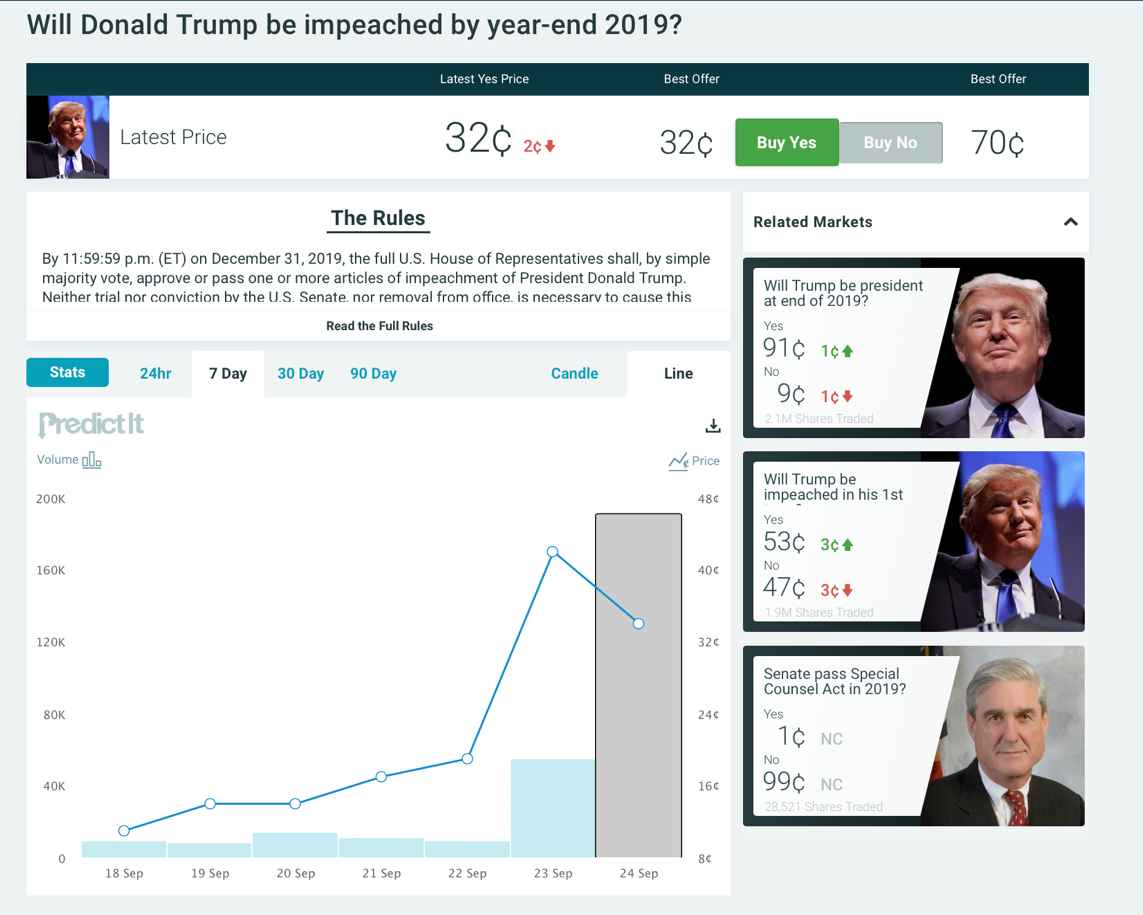 It will be really funny if it turns out to be a well-thought-out “political trap” into which the democrats will fall, in particular the Speaker of the House of Pelosi. For a long time, she did not dare to make a formal request for impeachment, even at the height of the story with the “Kremlin hand” in the elections.

However, the market is cautious, hoping that the administration could have missed something: 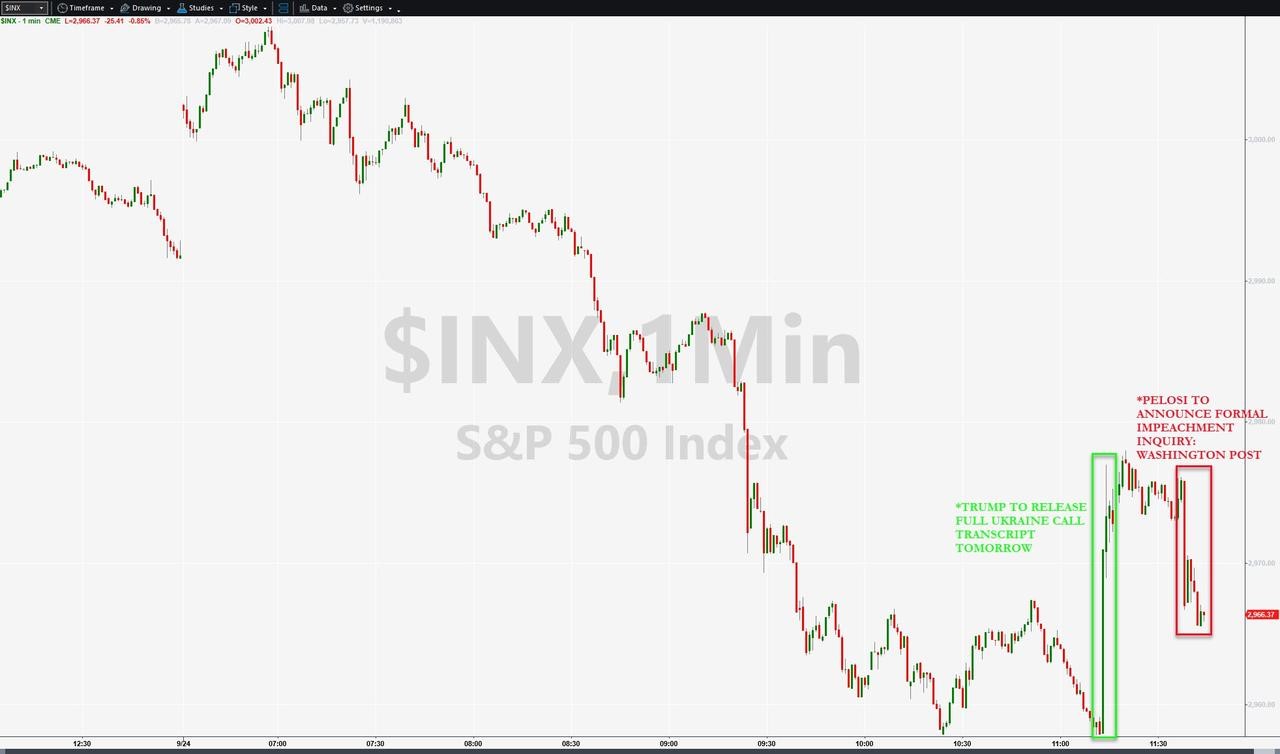 To recap: it is too early to give in to anxiety, it is highly likely that the Democrats will not dig up anything again.