English
Deutsch
中文
Русский
Español
العربية
Polski
ภาษาไทย
Tiếng Việt
Portuguese
REAL TIME NEWS
Loading...
The Non-Farm Payrolls report was disappointing, but the Fed seems unrelenting in its quest to move towards a higher pace of QE roll-out. This is proba...
The European Central Bank at its December meeting may agree on monetary policy for a relatively short period due to heightened uncertainty, but should...
Among all the themes that drove the markets this week, two main ones can be distinguished. The first is uncertainty caused by the new strain, which, b...
NFP Up Next The US labour reports for November are due today and will be the main data focus for the week. On the back of the Fed’s tapering announce...
COVID Uncertainty Dominates The uncertainty around the recently announced Omicron COVID-variant has been well reflected in the price action we’ve see...
COVID Fears Return Another week winds down, bringing us just that bit closer to the end of the year. It’s been a week of uncertainty for most, given ...
Credit Agricole Asia overnight Recorded cases of omicron are showing a greater geographical dispersion with cases now being recorded in Malaysia and...
Daily Market Outlook, December 3, 2021 Overnight Headlines Congress Thwarts Shutdown After Clash Over Vaccine Mandate Biden Lays Out Multi-Pronged P...
Type: Bullish Bounce Key Levels:Resistance: 0.9263Pivot: 0.91866Support: 0.91676 Preferred Case: Prices are on bullish momentum and consolidating i...
Type: Bullish Bounce Key Levels:Resistance: 113.674Pivot: 113.048 Support: 112.701 Preferred Case: Prices are consolidating in a triangle. We see p...
Type: Bearish Reversal Key Levels:Resistance: 58331Pivot: 57091.15Support: 53594.17 Preferred Case: Price is reacting in between a descending chann...
Type: Bullish Bounce Key Levels:Resistance: 0.63337Pivot: 0.62329Support: 0.61686 Preferred Case: We can expect that price bounce at the pivot in l...
The news flow concerning the new covid strain continues to keep investors in suspense, with the VIX trading at its highest level since May 2020 (28-3...
OPEC Up Next The big focus for markets today, away from any Omicron updates, is the OPEC+ meeting taking place in Algeria. The meeting has been calle...
Bailey Warns Of Residual Risks Expectations that the Bank of England will hike in interest rates before the year end seemed to take another knock yes...
Oil Traders Cut Longs The latest CFTC COT institutional positioning report shows that oil traders cut their net long positions again last week with t...
CIBC Key Headlines Bounce in the US equity futures, optimism is back, Moderna could have a COVID-19 booster shot targeting the omicron variant test...
Daily Market Outlook, December 2, 2021 Overnight Headlines US Health Officials Find First Us Case Of Omicron Variant In California US Shutdown Risk ...
Good day, Russian ruble underwent correction and approached the level of 74.00. Currently, it is trying to jump. In principle, the asset’s price migh...
Type: Bearish Reversal Key Levels:Resistance: 69.834Pivot: 68.48Support: 64.678 Preferred Case: Prices are consolidating in a parallel channel. We ...
Fund Analysis

Since the March Fed meeting, there have been no significant changes in the US economy to justify the current expectations of three rate cuts until February 2020 (the most likely outcome). The rebel in the forecasts, disturbing the dovish consensus, became Goldman Sachs, pointing to price stability in the stock market, unemployment lingering at a 50-year low, unchanged forecasts for growth in aggregate demand and US GDP, as well as elimination of the key factor of concerns - the tariff front with Mexico. After the retail sales release (control group + 0.5%, revision of the April figure), Atlanta Fed raised its forecast for economic growth to 2.1%, Goldman Sachs itself - to 1.6% in the second quarter. Acknowledging the potential Fed’s bias in favour of soft stance, Goldman notes that it will not sufficiently satisfy the markets that have aggressively priced in rate cuts recently. 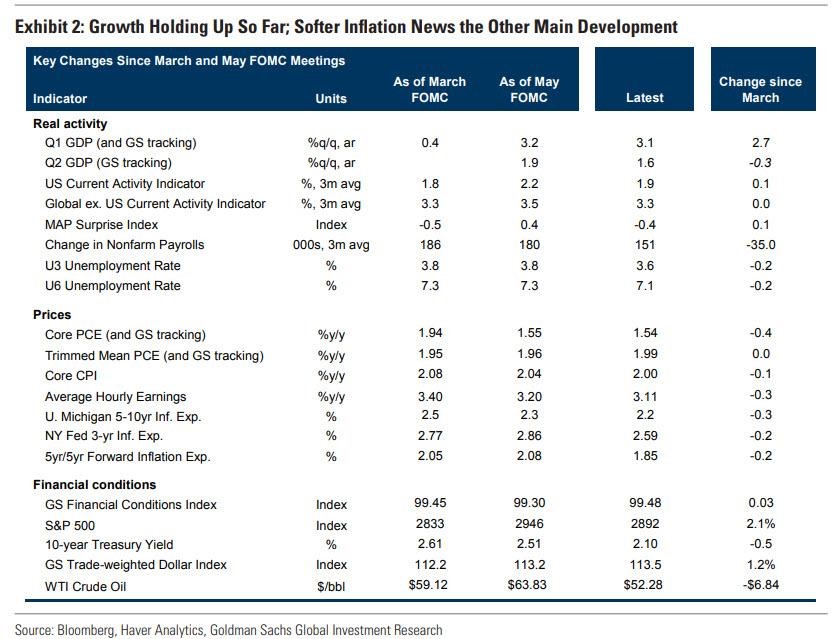 Joining the Goldman camp now looks like an especially attractive opportunity, given the strong market bias in the expectations of a global U-turn in the Fed policy, which is supported by the assumption of synchronous actions of global Central Banks following yesterday's ECB surrender. Draghi pointed out on Tuesday the potential willingness to continue moving rates into negative territory, putting even more pressure on commercial European banks. Accordingly, it is possible to speak of an unequivocal reaction of the markets in the form of a pullback, mainly in the fixed income market, if the Fed disappoints. For the dollar, this will mean strengthening positions against the euro, the Australian dollar and possibly the British pound. In the context of a bonds vs. stocks trade-off, this will mean the convergence of the S&P 500 valuation and the yield on 10-year Treasury bonds, between which there is now a strong gap: 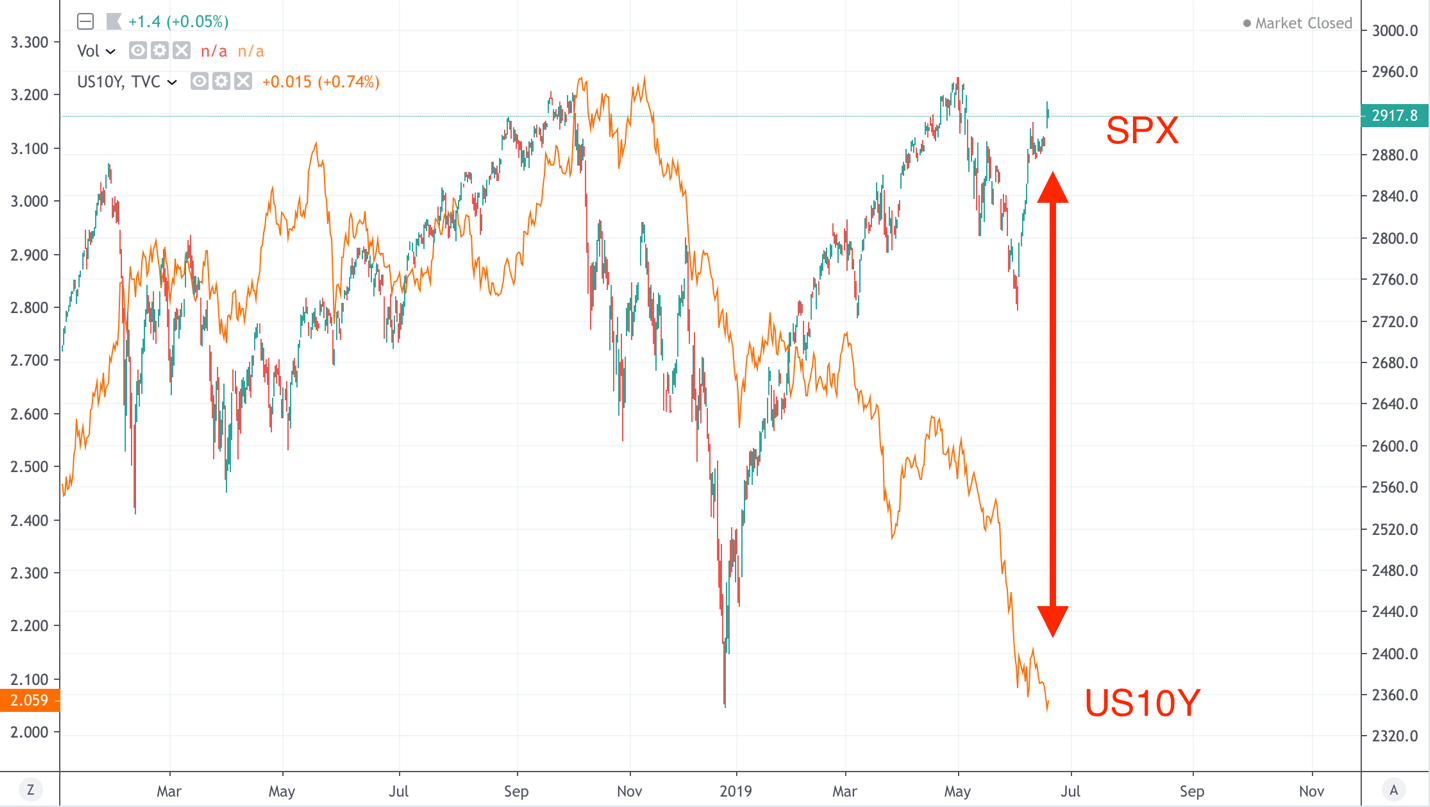 The Fed's policy in response to the development of the trade war between the US and China, at the moment, should rather be driven than led. Strong pressure on the US economy is priced in as a result of the expectations of a protracted standoff between US and China, at the same time the latest news (yesterday's telephone conversations between Trump and Xi, news about the “extended meeting”) increase the chances of a reverse outcome. In such a situation, the signals on the reduction of rates will be premature, since then the Fed have to revert monetary easing hints and this is fraught with costs, in particular market volatility (and a blow to the reputation). Preserving the room for maneuver should be considered now as the Fed's preference for predictable policy. Then the conceptual basis of the Fed’s guidance will have to be based on the principle “a reduction in the rate may be warranted if the US and China cannot get out of the trade impasse”.

Much attention will be focused on the wording in the regulator's communiqué, namely, preserving / throwing emphasis on “patience”, which has been a kind of Fed mantra since January. If the wording is excluded from the statement, it will move the development of the expectation of the July rate cut.

Touching QT now would also be unwise, although Citi believes that such a turnaround would be an inexpensive option to hint about the completion of a bias in tightening policy. However, it should be remembered that rates are the active policy tool, and in the third quarter, the reduction in the balance of assets will come to a natural end.

High Risk Warning: CFDs are complex instruments and come with a high risk of losing money rapidly due to leverage. 71% and 61% of retail investor accounts lose money when trading CFDs with Tickmill UK Ltd and Tickmill Europe Ltd respectively. You should consider whether you understand how CFDs work and whether you can afford to take the high risk of losing your money.
Written by Arthur Idiatulin
Arthur is a stock market and currency expert with a vast experience in market research and investment consulting. Dedicated Forex trader and financial practitioner, keen on testing new trading techniques and investment strategies.

XAGUSD approaching resistance, look out for a potential reversal

Lagarde: Ecb Is Not Ready to Give Long-term Policy Pledges

Nfp May Cause Short-term Dollar Push

How Much Will Omicron Overshadow Today's Nfp Release?

Fomo Friday: Audjpy On The Rocks