BoJ Kuroda: The Central Bank is Ready to Cut Rates in Response to External Risks

The head of the Bank of Japan, Haruhiko Kuroda, said on Tuesday that if the Central Bank had to explore new depths of easy monetary policy, it will concentrate on near- and medium-term parts of the yield curve to avoid its further flattening.

According to Kuroda, it’s premature to talk about the outcome of the BoJ meeting at the end of October, since the decision will depend on the incoming data and, to a greater extent, on external risk factor in the near future. However, the bank’s readiness to loosen credit conditions has grown, as the US-Chinese trade conflict has remained unresolved for a long time, and despite peaceful development scenarios it can significantly complicate the task of reviving the Japanese economy.

“The possibility of an external economic slowdown affect Japan’s economic growth and inflation requires greater policy focus on risks from abroad,” said Kuroda at a press conference in Osaka.

The process of developing a plan for further stimulus will also take into account rising costs, such as thinning the profit margin of the banking sector. In this case, the Central Bank will have to focus on purchases of short-term and medium-term securities in order to maintain a convex shape of the curve (i.e. term spread of the yield).

The chart below shows that the Central Bank is poorly succeeding in this task. In part of the yield curve from 1 month to 10 years, the concavity has been growing with the expansion of stimulus measures, which means that pressure on financial institutions increases: 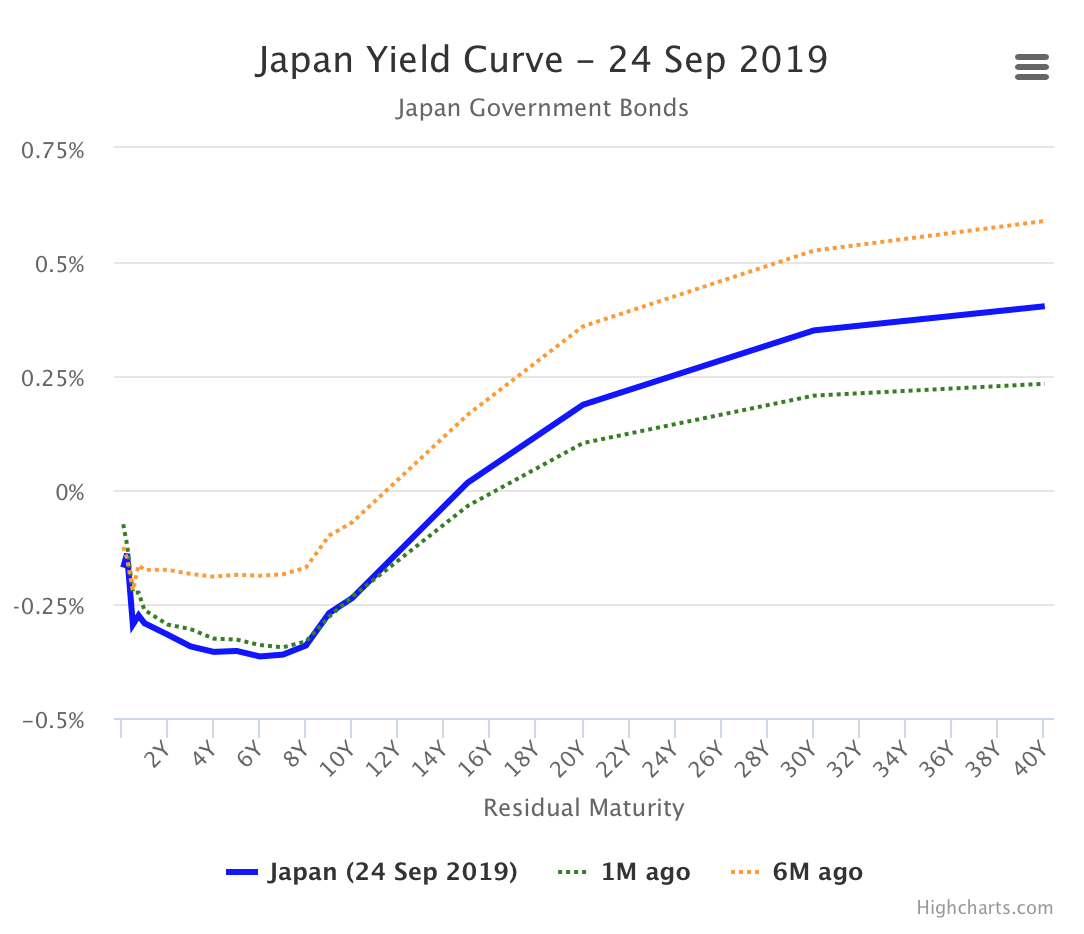 “If the Bank of Japan softens its policy, targeted bond purchases will mainly include short and medium maturity securities, to influence the relevant rates. The economic effect of such a composition of purchases is stronger than with a high share of long-term securities,” said Kuroda.

Although Kuroda did not say directly what stimulus measures will be the primary tool, his remarks suggest that the Central Bank will directly target interest rates, rather than announce the volume of bond purchases (i.e. QE). As part of the targeting of the yield curve, the Bank of Japan keeps short-term rates at -0.1% and long-term 10-year rates at 0%. The Central Bank also buys risky assets to achieve target inflation of 2%.

To determine whether further action is required, the Central Bank will study the dynamics of consumption, the dynamics of salaries and prices, as well as the development of inflationary expectations of the population. According to Kuroda, the situation is changing rapidly and risk aversion due to hopes for a peace deal between China and the US is declining. Accordingly, it is likely that economic dynamics may again come back to the fore.

High Risk Warning: CFDs are complex instruments and come with a high risk of losing money rapidly due to leverage. 71% and 65% of retail investor accounts lose money when trading CFDs with Tickmill UK Ltd and Tickmill Europe Ltd respectively. You should consider whether you understand how CFDs work and whether you can afford to take the high risk of losing your money.
Written by Arthur Idiatulin
Arthur is a stock market and currency expert with a vast experience in market research and investment consulting. Dedicated Forex trader and financial practitioner, keen on testing new trading techniques and investment strategies.