English
Deutsch
中文
Русский
Español
العربية
Polski
Italiano
ภาษาไทย
Tiếng Việt
Portuguese
Loading...
US November Payrolls gained 263K, according to the report released by the BLS on Friday. The reading beat estimates however MoM growth was the lowest ...
CADJPY Sell Off ContinuesCADJPY has been one of the best short plays of recent weeks, driven by weaker oil prices and a higher JPY. With global recess...
Daily Market Outlook, December 2, 2022 ‘Markets Marking Time Ahead Of Non-Farm Payrolls ReleaseWall Street took a breather following the post-Powell-i...
Another batch of US macroeconomic data pointed to an easing in inflation pressures while the consumer spending index (Core PCE) rose by 0.2% in Octobe...
NFP Up Next All eyes are on the latest set of US labour reports today. With the US Dollar heavily sold in the run up to the release, expectations are ...
Type: Bearish MomentumKey Levels:Resistance:1475.50Pivot:1409.75Support:1380.50Preferred Case:We have a bearish bias on the H4 chart. In addition, pri...
Type: Bullish ContinuationKey Levels:Resistance:2577Pivot:2422Support:2500Preferred Case:Looking at the H4 chart, my overall bias for CC1! is bullish ...
USDJPY Drop Deepens The holiday season is fast approaching but markets are showing little sign of slowing down. It’s been another busy week across the...
Type: Bullish ContinuationKey Levels:Resistance:1.06680Pivot:1.05085Support:1.03315Preferred Case:The current bias for 6E1! on the H4 chart is bullish...
Bitcoin has tested the flag and jumped above the level of 17000. The price of Bitcoin might potentially pull back from a very important resistance at ...
Weaker USD Boosts ETH With USD on the backfoot following dovish comments from Fed’s Powell yesterday, risk assets have seen a wave of demand. Better r...
Oil Traders Cut Longs Last WeekThe latest CFTC COT institutional positioning report shows that oil traders reduced their net long positions last week....
Type: Bullish ContinuationKey Levels:Resistance:4173.25Pivot:3913.25Support:3751.75Preferred Case:On the H4 chart, we have a bullish bias. Furthermore...
Type: Bearish MomentumKey Levels:Resistance:745.500Pivot:613.250Support:665.000Preferred Case:On the H4 chart, we have a bearish bias. To add confluen...
The dollar index sank 1% while S&P 500 approached 4100 points following Powell’s speech on Wednesday, which the market interpreted as an acknowled...
NZDUSD, NZDCAD & GBPUSD Trade To Targets, What Next?...
Type: Bullish ContinuationKey Levels:Resistance:3.9600Pivot:3.6885Support:3.5545Preferred Case:Looking at the H4 chart, my overall bias for HG1! is bu...
USD Slides As Powell Greenlights Smaller December HikeThe US Dollar has come under heavy selling pressure today following a dovish set of comments fro...
Daily Market Outlook, December 1, 2022 ‘Powell Points To Moderating The Pace Of Rate Rises, Santa Rally To Start?’Asian equity markets took their lead...
Type: Bearish ContinuationKey Levels:Resistance:1830.5Pivot:1945.0Support:1759.5Preferred Case:On the H4 chart, we have a bearish bias. To add conflue...
Fund Analysis Market Insight Tech Analysis

The latest CFTC COT report showed that over prior week, net-crude positions grew by 5,378 contracts to a total of 429,975 contracts on the week. The rise in WTI positioning continues to reflect ongoing expectations that a US-Sino trade deal is forthcoming.

Over recent weeks, the market has heard comments from both US and China leaders which have generally remained supportive. Last week, Trump told FOX news that a trade deal was “potentially very close”. Following up on those comments this week, Trump told reporters that the US and China are now in the “final throes” of agreeing the phase-one trade deal which was first announced at the start of October.

Equally, the Chinese government has been playing its part in keeping optimism alive. The Chinese Ministry of Commerce last week noted that trade talks were still progressing and a deal is still expected. President Xi said that China is very interested in signing a deal based on “mutual respect and equality”.

If the two sides can sign a trade deal ahead of December 15th, this means that the market will avoid the next round of planned US tariffs. The US warned last month that is a trade deal is not signed by the 15th of December, it will go live with further tariffs on $156 billion of Chinese goods.

Attention is now turning towards next week’s OPEC meeting. The final meeting of the year is expected to see the group announcing further measures to boost oil prices. In June, OPEC extended the original production restrictions set up in January. These will now run until the end of Q1 next year. However, with WTI prices still under pressure amidst the uncertainty over US-Sino trade relations, the market now expects another round of extensions which could see production caps in place through until the middle or even the end of next year.

One of the major problems for OPEC has been the continued rise of US crude production which has been ploughing higher into record levels this year. The combination of a reduced demand outlook, tied to the ongoing US-Sino trade war, and higher US production levels, means that crude prices have been heavily anchored over most of this year. While it now seems as though an initial trade deal will be agreed in the coming weeks, a lot of tariffs remain in place which will continue to impact world trade. As such, further OPEC measures are widely expected next week.

The EIA reported that WTI levels in the US were higher by 1.6 million barrels last week. This is now the fifth straight week that oil inventories have risen in the US that, reflecting the ongoing supply/demand imbalance in the market. Crude production in the US was also reported as having risen last week, hitting fresh all-time highs. This latest increase further reinforces the view that OPEC will announce new measures.

WTI From a technical and trade perspective. WTI is still holding above the yearly pivot at $54.88 and continues to rise above the monthly R1 at $57.09. While this level remains supportive, bias remains for continued upside, in line with longer-term VWAP remaining positive. 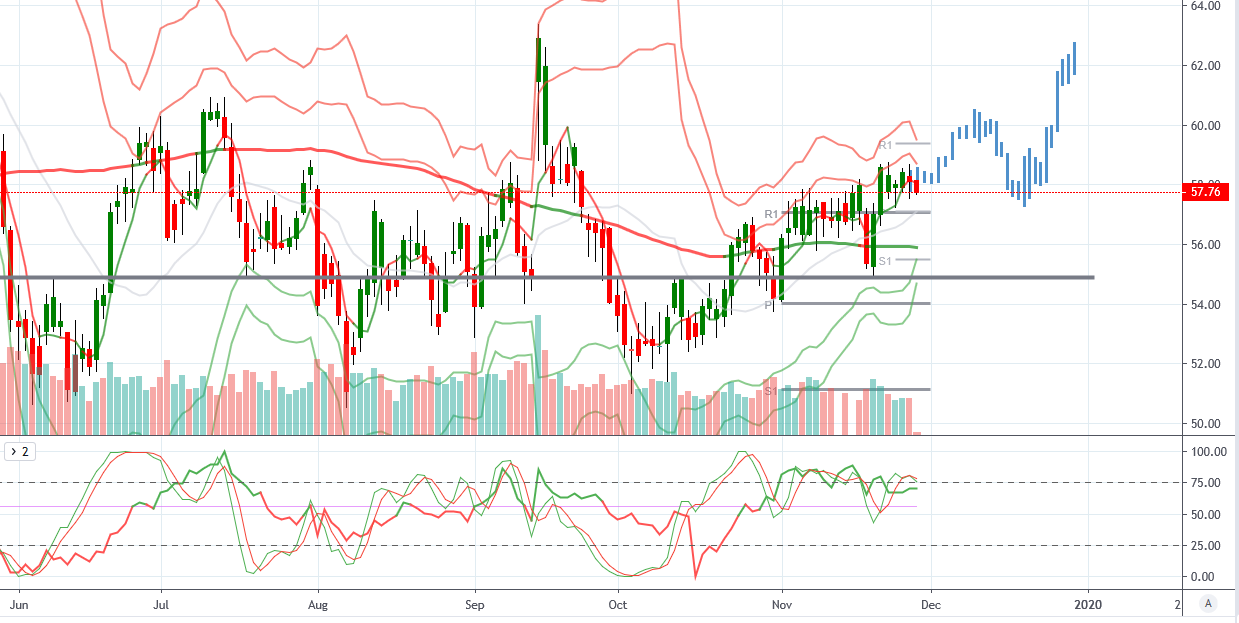 High Risk Warning: CFDs are complex instruments and come with a high risk of losing money rapidly due to leverage. 72&percnt; and 71&percnt; of retail investor accounts lose money when trading CFDs with Tickmill UK Ltd and Tickmill Europe Ltd respectively. You should consider whether you understand how CFDs work and whether you can afford to take the high risk of losing your money.

High Risk Warning: CFDs are complex instruments and come with a high risk of losing money rapidly due to leverage. 76% and 75% of retail investor accounts lose money when trading CFDs with Tickmill UK Ltd and Tickmill Europe Ltd respectively. You should consider whether you understand how CFDs work and whether you can afford to take the high risk of losing your money.

Tagged in: #china #opec #us
Written by Patrick Munnelly

Patrick has been involved in the financial markets for well over a decade as a self-educated professional trader and money manager. Flitting between the roles of market commentator, analyst and mentor, Patrick has improved the technical skills and psychological stance of literally hundreds of traders – coaching them to become savvy market operators!

Oil Prices Surge, but for How Long?