English
Deutsch
中文
Русский
Español
العربية
Polski
ภาษาไทย
Tiếng Việt
Portuguese
REAL TIME NEWS
Loading...
The dollar is shrugging off a wave of shorts that led to decline of the US currency index from 94.00 to 93.50 area on Tuesday. The decline has been co...
Canadian CPI Up Next The key data focus heading into today’s US session is the release of September’s Canadian CPI. On the back of the weaker-than-fo...
Revamping Old Patterns In terms of technical setups, the best advice is always to keep things simple. There are plenty of complicated, esoteric chart...
CPI Stalls, But Still Above Target The latest set of UK inflation data released today showed that CPI softened somewhat over the last month. Followin...
Citi European Open We saw markets hold mostly steady in a morning marked by Chinese data. USD and other G10 currencies held mostly steady, while AUD...
USDJPY due for a potential short term pullback Type Bearish Reversal Resistance: 115.567 Support: 113.798 Pivot: 114.581 Preference: USDJPY is ...
DAX is at a Pivot, potential for bounce Type: Bullish Bounce Resistance: 15615.04 Support: 15375.94 Pivot: 15450.25 Preference: DAX have recent...
Daily Market Outlook, October 20th, 2021 Overnight Headlines Biden Tells Democrats Package Of Up To $1.9T Should Be Target Progressives See Budget D...
After reassessment of the pace of policy tightening by major central banks on Monday, which led to a sharp rise in short-term bond yields (German 2-ye...
AUD In Demand The Australian Dollar has been well bid across the European today following the release of the bank’s latest meeting minutes overnight....
FTSE At Key Level The FTSE is now trading back around its highest levels of the year. Following a frustrating sideways period over the last six month...
Better Start For Equities It’s been a mostly better start for global equities benchmarks this week as the pullback in the US Dollar allows asset mark...
Citi European Open Positivity seemed to mark the Asian morning, which saw USD offered against most currencies. The largest gainers were AUD, NZD and...
Daily Market Outlook, October 19th, 2021 Overnight Headlines US Democrats Battle Over Climate Change Plans In $3.5 Trillion Bill Manchin Casts Doubt...
Despite the weak report from U. Michigan on Friday and unsettling economic update from China on GDP and production on Monday, markets are busy pricin...
Type: Bearish Reversal Resistance: 15731.44 Support: 15446.18 Pivot: 15606.47 Preference: Price have approached our Pivot at 15606.47 which is a...
Type: Bearish Reversal Resistance: 115.814 Support: 112.088 Pivot: 114.61 Preference: Price has been consolidating in ascending channel. We spot...
In this Weekly Market Outlook 18-10-21, our analyst looks into the trading week ahead, possible market moving data releases across the globe and the t...
Daily Market Outlook, October 18th, 2021 Overnight Headlines US Democrats Face A Deadline On Benefits And Climate Bill Consensus Senator Johnson Hop...
The Russian ruble broke the key support at the level of 71.50 and dropped, targeting the support at the level of 70.50. So far, the currency pair seem...
Market Insight Tech Analysis Trading Strategies

The US market closed higher overnight even as protests over George Floyd’s death continued to gain traction and risked sparking more civil unrest across the country, not to mention ongoing US-China tension on the external front. Local officials had imposed curfew to curb the nighttime turmoil that involved assets damages while President Trump had threatened military action. Gains were broad-based across all sectors the Dow Jones added 268pts or 1.1% whereas the S&P500 and NASDAQ picked up 0.8% and 0.6% respectively, lifted by the prevailing risk-on sentiment that had also prompted the selling of safe havens. 10Y UST yield rose 3bps to 0.69%, gold price edged lower (-0.7%) to $1727.7/ounce.

Asian equity markets are again higher this morning following gains yesterday in the US and Europe. Positive economic data surprises helped markets to shrug off concerns about domestic tensions in the US and Hong Kong. UK PM Johnson revealed plans to modify the visa system to accommodate Hong Kong citizens if China goes ahead with its national security law.

In China the May Caixin services PMI rose to a higher-than expected 55.5 from 44.4 in April. Final readings for both the Japanese and Australian services PMIs were also revised up to 26.5 (from 25.3) and 26.9 (from 25.5) respectively. Australian Q1 GDP posted a smaller than forecast decline of 0.3%.

Today’s May PMI services releases for the UK and the Eurozone are final updates. The initial readings showed pickups from April lows. However, both stayed well below the 50 that signals a rise in activity so at best they can be seen as tentative signs of stabilisation in the economy at very low levels. The ‘final’ updates will include data from later in the month as lockdowns started to be eased and so may see some modest upward revisions. There will also be first readings for Eurozone countries including Italy and Spain that are not released as ‘flash’ estimates. German unemployment data for May and Eurozone data for April are both expected to show significant rises. However, Eurozone unemployment does not seem to be rising by as much as it has in the US because a number of European governments have introduced job retention schemes.

In the US, the ADP estimate of private sector employment in May will be watched for a preview of Friday’s official labour market report. Another huge monthly fall in employment is expected of 10 million, although that would be less than half of April’s decline. Also in the US the ISM non-manufacturing survey for May will provide a timely update on conditions. It is likely to show a similar path to the already released PMI data, up from April’s low but still below the 50 expansion level. Meanwhile, April factory orders are expected to record a big decline of more than 12% reflecting in particular ongoing weakness in the transport sector.

The Bank of Canada is expected to leave policy unchanged at today’s update. This will be the first meeting for new BoC Governor Tiff Macklem. He is not scheduled to give a press conference on this occasion but the press statement is likely to confirm that the BoC stands ready to supply more support to the economy if necessary.

From a technical and trading perspective, as 1.10 now acts a s support bulls will target a test of the equality objective at 1.1235, which also represents the monthly R1 and weekly R1, from here expect profit taking for another test of 1.10 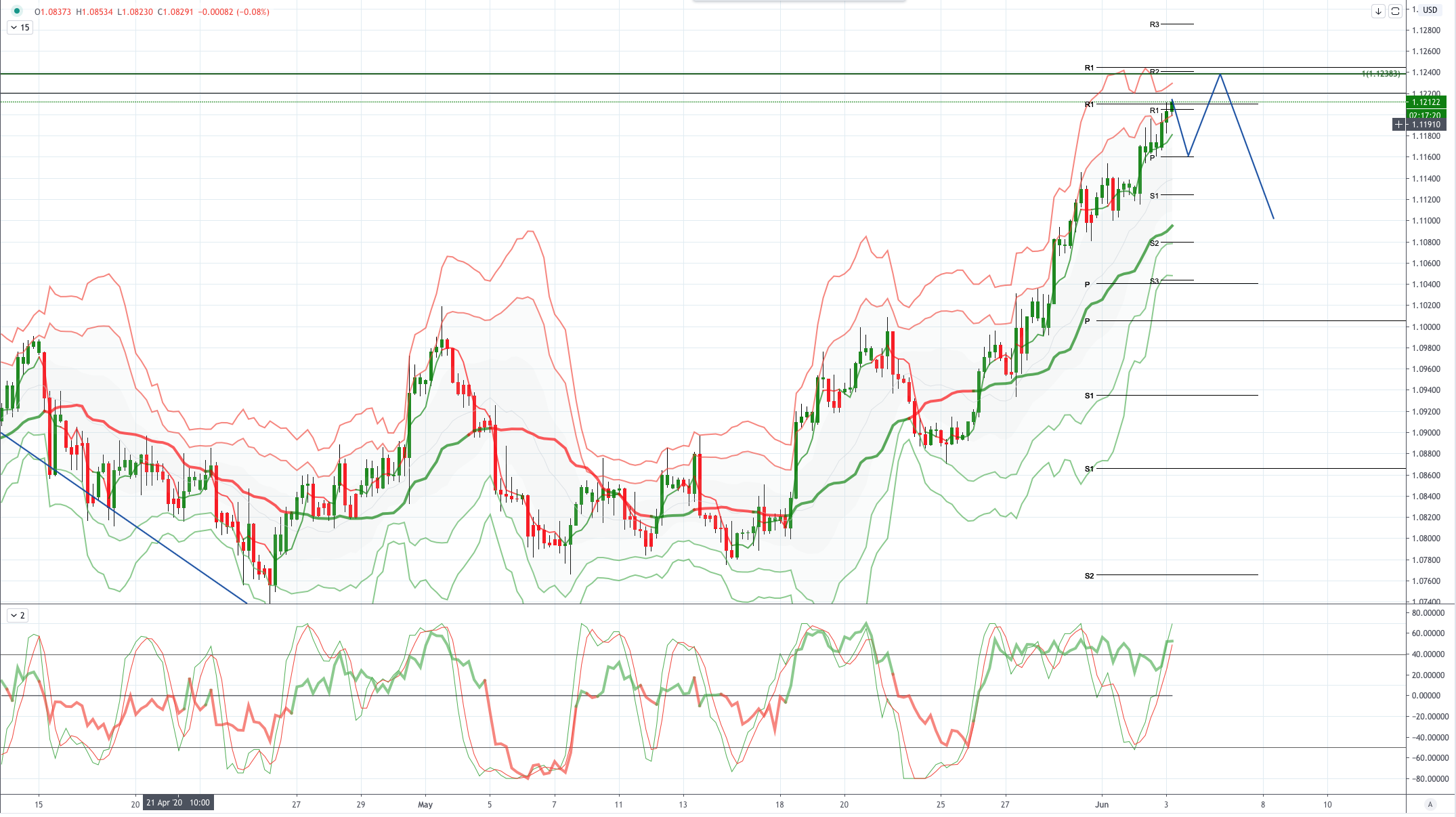 GBPUSD From a technical and trading perspective, price tested and overcale symmetry swing resistance sighted at 1.2475. As price continues to trade above 1.2475, look for a test of cycle highs at 1.2650 before a potential correction could develop to test bids back to 1.2350 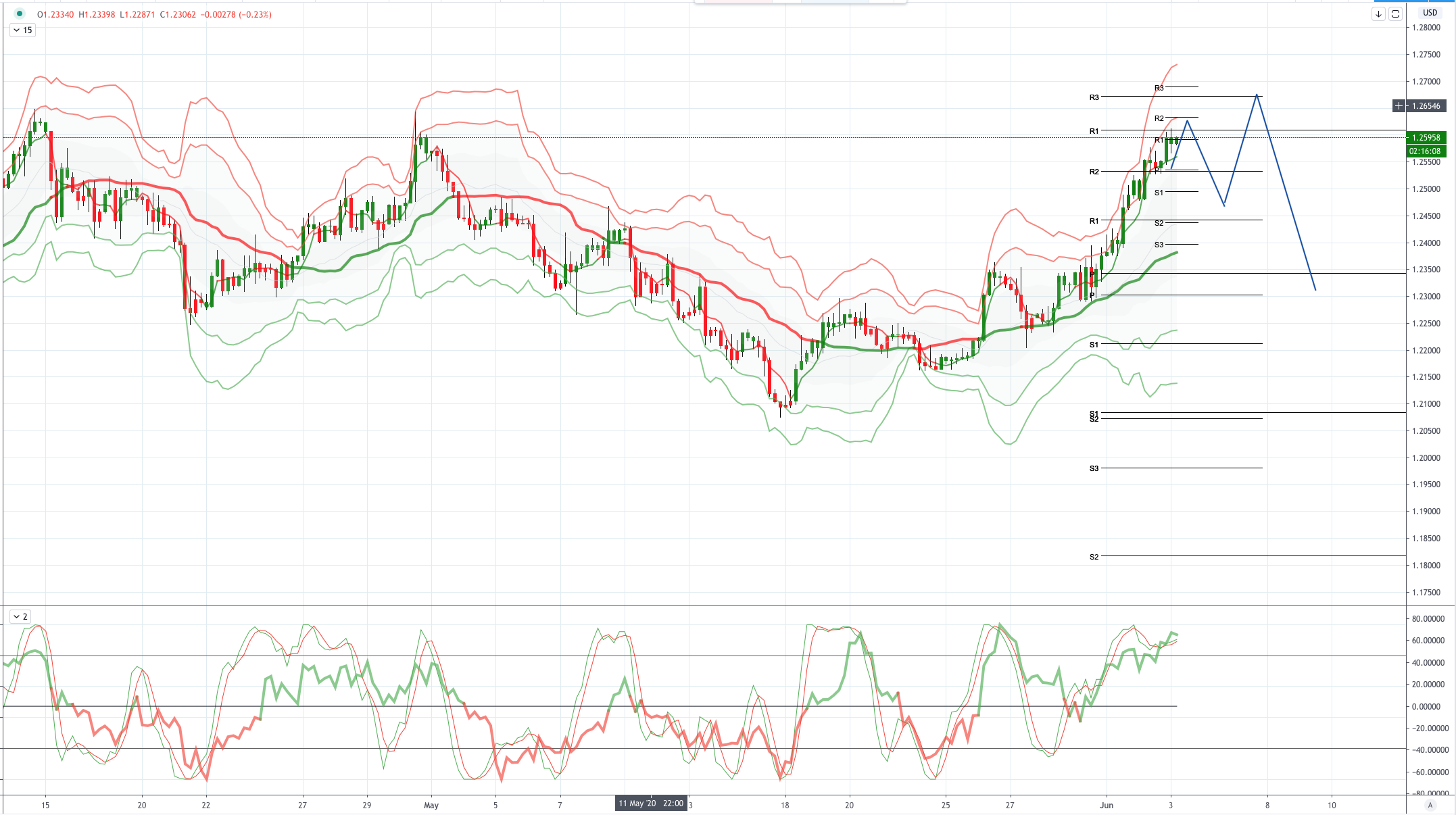 USDJPY From a technical and trading perspective, the topside breach of 108.50 delays downside objectives opening a retest of range resistance above 109, however as supply above 1.09 stems the upside look for a retest of buds back to 1.08 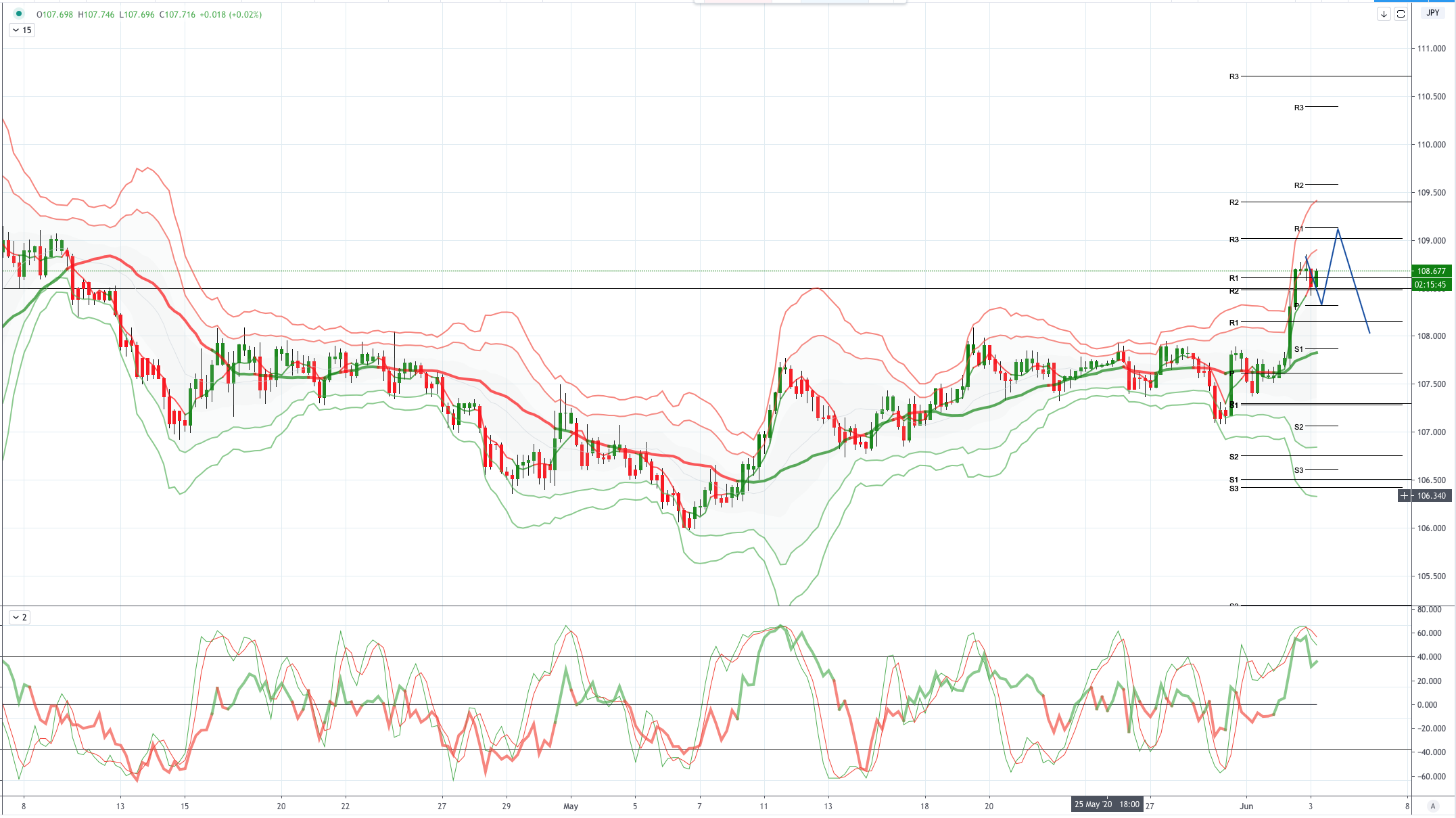 AUDUSD From a technical and trading perspective,sustained price action above .6800 witnessed the grind higher persist opening a test of the psychological bit figure at .7000. From this initial foray above .7000 anticipate profit taking pullback to .6800 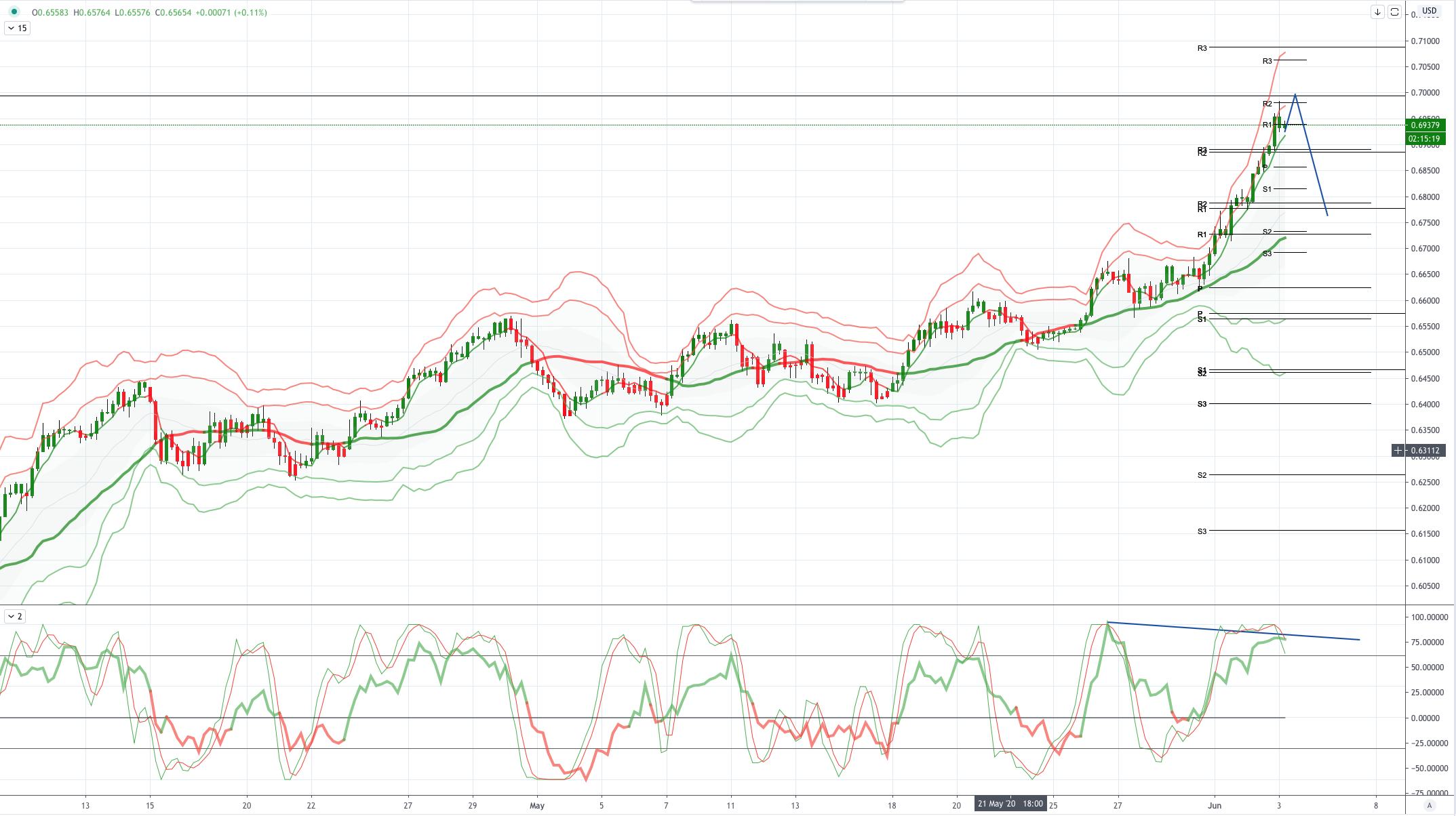 High Risk Warning: CFDs are complex instruments and come with a high risk of losing money rapidly due to leverage. 71% and 61% of retail investor accounts lose money when trading CFDs with Tickmill UK Ltd and Tickmill Europe Ltd respectively. You should consider whether you understand how CFDs work and whether you can afford to take the high risk of losing your money.
Written by Patrick Munnelly
Patrick has been involved in the financial markets for well over a decade as a self-educated professional trader and money manager. Flitting between the roles of market commentator, analyst and mentor, Patrick has improved the technical skills and psychological stance of literally hundreds of traders – coaching them to become savvy market operators!
Previous Post

Chart of the Day GBPUSD