English
Deutsch
中文
Русский
Español
العربية
Polski
ภาษาไทย
Tiếng Việt
Portuguese
REAL TIME NEWS
Loading...
The key event next week is undoubtedly the Fed meeting on Wednesday. There is some disagreement in the market as to whether there will be hints of an ...
The Bank of Russia at the meeting on Friday raised its key rate by 0.5 percentage points - up to 5.5%. The Board of Directors of the Central Bank expl...
The ECB disappointed euro bulls on Thursday, as it said it would maintain high level of monetary stimulus in 3Q. It was expected that the ECB will ann...
Nikkei is testing and reacting above recent swing low support and 78.6% Fibonacci retracement. A short term intraday bounce above our Pivot towards de...
EURUSD, H4 is above pivot, potential for bounce. Price is approaching the 23.8% fibonacci retracement, 100% fibonacci extension where we may potential...
DAX testing our pivot, potential for rise Price is testing our Pivot, in line with 100% fibonacci extension and horizontal graphical overlap. where we...
Prices is appraoching pivot in line with 78.6% Fibonacci retracement and 78.6% Fibonacci extension. Prices might push down towards horizontal swing lo...
Weekly Live Market & Trade Analysis In this week's live market and trade analysis session, we assessed the technical price patterns of over 20 charts ...
Daily Market Outlook, June 11, 2021 Overnight Headlines Fed to announce QE taper in Aug or Sept on rising inflation concerns – Reuters poll • Bipart...
USDJPY is facing bearish pressure as it continues to hold below the descending trendline resistance and MACD is holding under the 0 line. We could see...
Oil prices came under pressure on Wednesday; WTI struggled to stay above the $70 mark. The catalyst for the decline was bearish EIA report on commerci...
Price is reversing from our Pivot, in line with 50% fibonacci retracement, 78.6% fibonacci extension and horizontal graphical overlap. where we may se...
EURUSD approaching pivot, potential for drop . Price is approaching the 61.8% fibonacci retracement, where we may potentially see a drop towards the 1...
The Russian ruble was trying to break the level of 72.30 on Wednesday. However, the asset managed to slightly break the level and pull back. So, there...
Daily Market Outlook, June 10, 2021 Overnight Headlines ECB to keep money taps wide open even as recovery takes hold • ECB policymakers to hold 3-da...
Prices are facing bullish pressure from ascending trendline support in line with 61.8% Fibonacci retracement and 78.6% Fibonacci extension. Prices mig...
Nikkei coming close to descending trendline resistance and Key 61.8% Fibonacci retracement. A short term pullback below our Pivot towards graphical sw...
USDJPY is testing Pivot, in line with 38.2% Fibonacci retracement, 61.8% Fibonacci extension and horizontal pullback support. We could see a bounce an...
Oil prices rose on Tuesday continuing to develop modest upside momentum on Wednesday. WTI has broken the $70 per barrel mark for the first time since ...
GBP has seen a fresh wave of buying across the European morning on Wednesday in response to comments made yesterday by the Bank of England’s chief eco...
Market Insight Tech Analysis Trading Strategies

US-China tensions remain elevated, with China’s decision to press ahead with new national security laws for Hong Kong drawing condemnation from US politicians from both parties and raising the risk of US sanctions. Hong Kong’s Hang Seng equity market fell 5.6% on Friday, its biggest one-day fall since 2015, as market participants braced for renewed protests in the city. Demonstrations returned to the city over the weekend, with police firing tear gas and making arrests.

Chinese equity markets fell about 2%. Weakness in Asian equities spilled over to the US equity market, with S&P500 futures falling by as much as 1.2% at one stage. But US equities recovered over the course of the session, ending in slightly positive territory (S&P500: +0.2%, NASDAQ: +0.4%). Sentiment was boosted by comments from the US government’s medical advisor Fauci who said Moderna’s experimental vaccine for COVID19 looked “promising”.

The trend in COVID-19 cases still appears to be heading in the right direction, encouraging more countries to take steps towards loosening restrictions. Spain said it would reopen borders for international tourism from July and eased restrictions in Madrid and Barcelona. New York reported 84 new COVID-19 deaths on Saturday, the lowest level since late-March, and state lawmakers said they would allow gatherings of up to 10 people.

Global rates were little changed on Friday, with the 10- year US Treasury yield down just 1bp to 0.65%. The 10- year US yield is in the middle of its narrow 0.55% - 0.75% range that has prevailed since April. On Friday, the Fed announced it would again taper its government bond buying for the week ahead, to around $5b per day (down from $6b last week and a peak daily purchase pace of $75b).

The National People’s Congress is underway in China. While most of the focus has been on the proposed national security laws for Hong Kong, its notable that China omitted to publish a growth target for this year, testament to the extraordinary shock to the economy from COVID-19 and the highly uncertain outlook. This is the first time China has opted not to publish a growth target for decades. China outlined plans to increase infrastructure investment, lifting borrowing caps for governments and providing ¥2 trillion ($US285b) in stimulus to local governments to “cut taxes and fees, reduce rents and interest on loans, and increase consumption and investment”.

FX market movements were reasonably subdued on Friday. The BBDXY index rose a modest 0.2%. Like US interest rates, the USD indices remain well-contained within their narrow trading ranges over the past two months. The JPY and Swiss franc outperformed, with both currencies unchanged against the USD on Friday. There was little reaction to the Bank of Japan’s announcement that it would provide a ¥30tn (~US$280b) loan facility to banks, to encourage lending to small businesses. Banks will get access to funding at 0% and the BoJ will even pay banks 0.1% on funds they lend to small businesses under the government’s business loan guarantee scheme.

The GBP fell after BoE Deputy Governor Ramsden told Reuters it was “perfectly reasonable to have an open mind” about negative rates. Ramsden cautioned that the Bank needed to understand how negative rates could affect the banking system before deciding whether it would be an appropriate policy tool, echoing similar comments from Chief Economist Haldane and Governor Bailey from earlier in the week. Separately, UK retail sales, excluding spending on petrol, fell a staggering 15% in April, matching economists’ estimates. The GBP was 0.4% lower on Friday, at 1.2165.

This week’s CFTC data reflect a further moderation in the aggregate bearish USD positioning that had accumulated through March and peaked in April. The overall USD short position against the major currencies we monitor was cut by USD1.4bn in the week through Tuesday to USD6.6bn. Bullish EUR sentiment, a key driver in the buildup of the overall USD short position in recent weeks, continues to fade, meanwhile. The net long here remains sizeable at USD9.9bn but a combination of gross long liquidation and an extension of gross shorting activity cut the net bullish EUR position USD688mn. Note that while investors were more constructive on the USD, positioning for safety saw net gold longs rise USD2.5bn

From a technical and trading perspective, the rejection and reversal from last weeks 1.10 test has gathered momentum, the daily volume weighted average price has now flipped bearish, without a snap back rally and close back above 1.0935, price looks poised retest support back to 1.08, a failure here would be a further bearish development opening a move to test the downside equality objective at 1.0630 and the current year to date lows 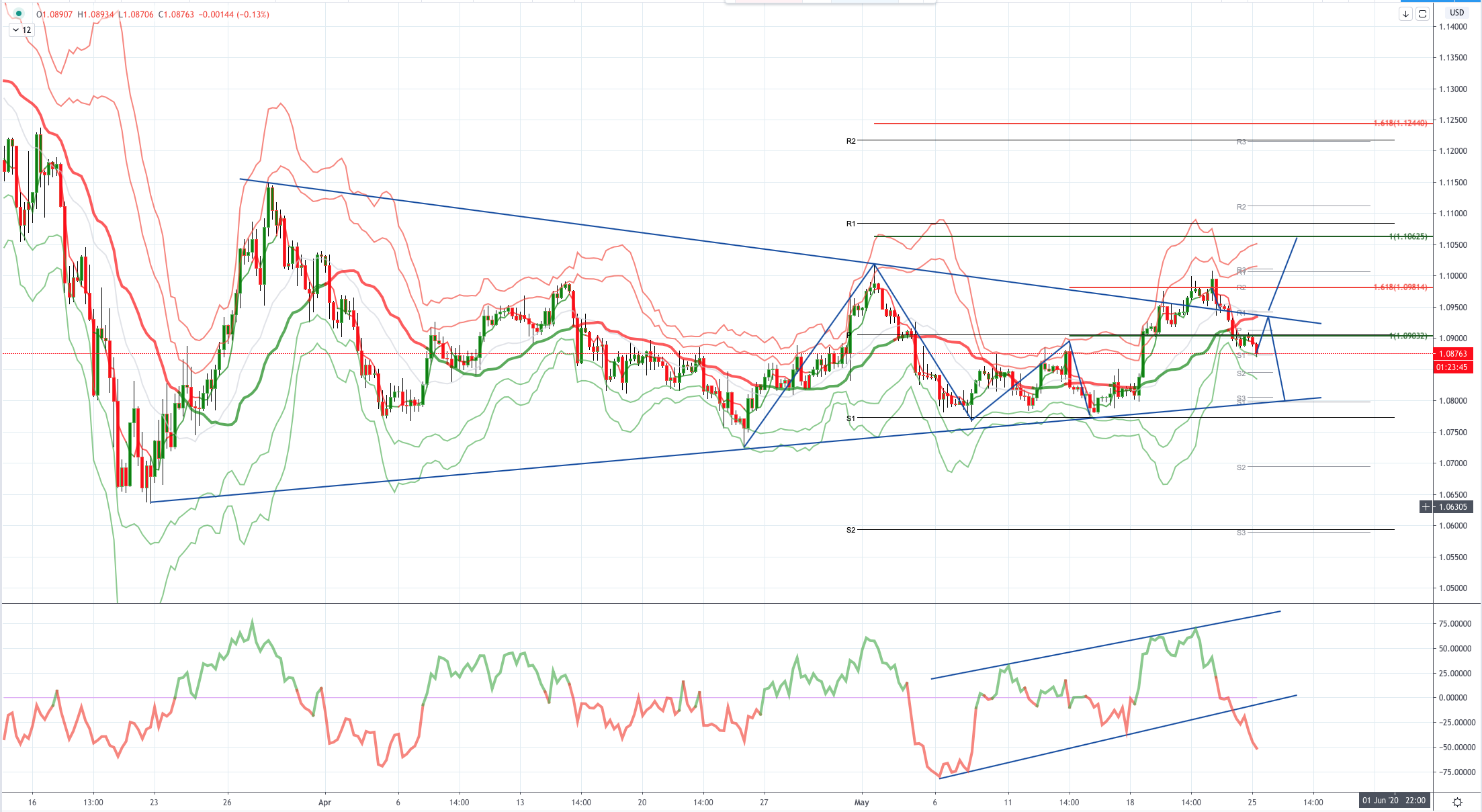 GBPUSD From a technical and trading perspective, the momentum trendline failure forewarned of the price decline through 1.23 support, as this level contains upside attempts look for a move to test the pivotal support cluster to 1.20 It is noteworthy demand has picked up for GBPUSD FX options that would allow holders to sell the pound at 1.2000 and below over coming weeks. There's already been demand for early July downside options as concern grows over the June 30 Brexit deadline If buying interest isn't sufficient to defend 1.2150 then bears will press for a test of the 1.20 target 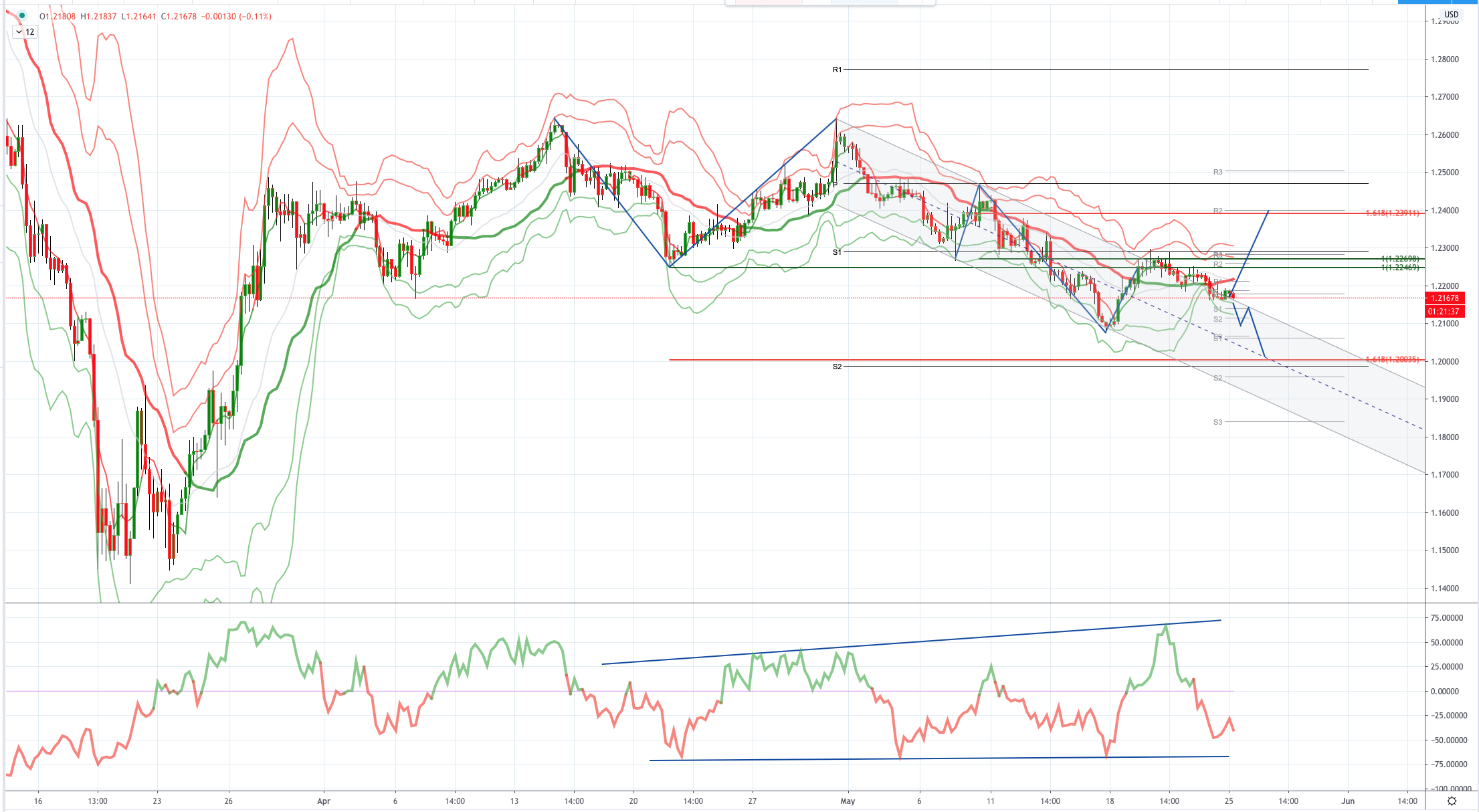 USDJPY From a technical and trading perspective, as 1.0850 contains the upside drift, look for a move back through 1.07 to develop downside momentum,however, a topside breach of 108.50 would delay downside objectives opening a retest of range resistance above 109 before lower again. 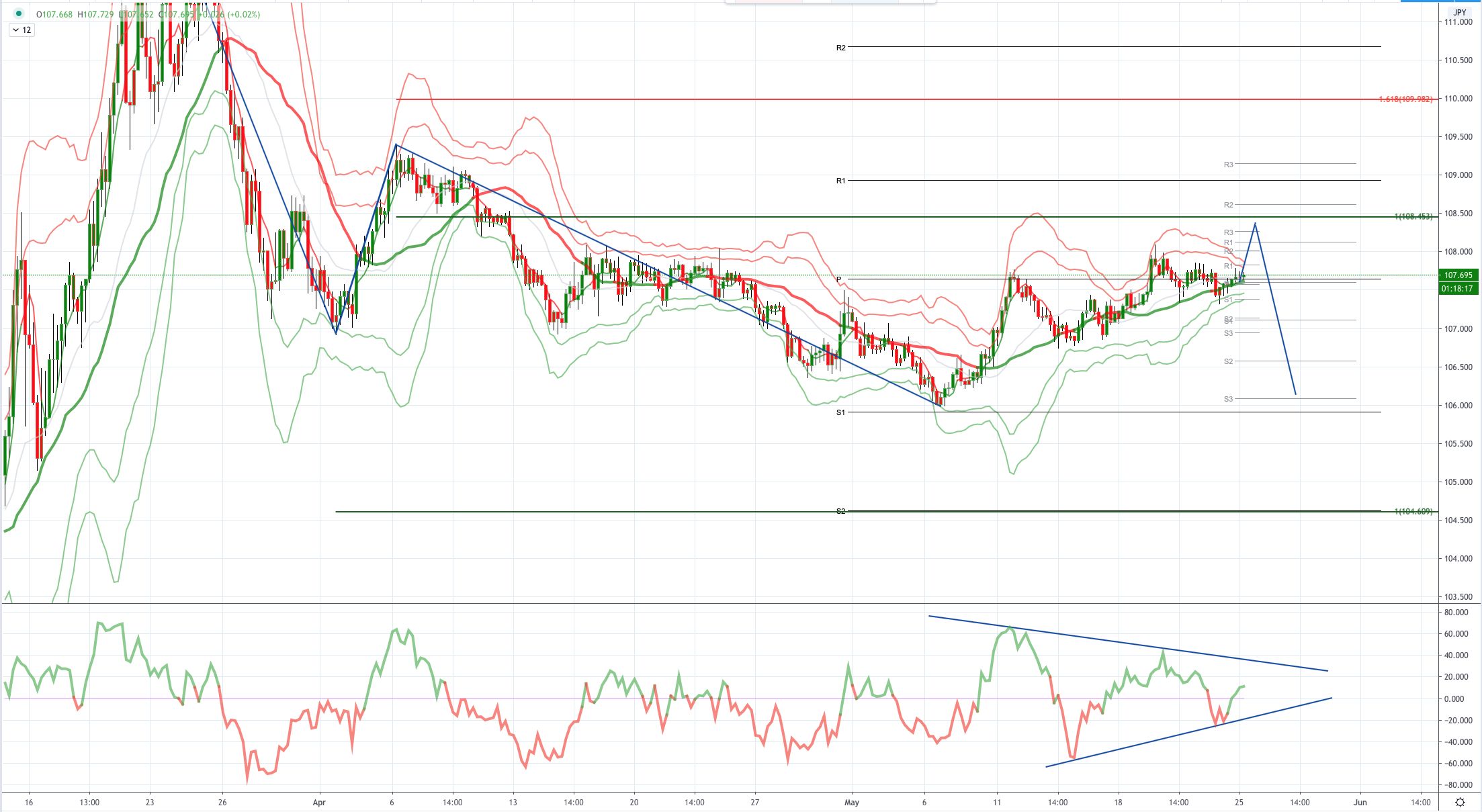 AUDUSD From a technical and trading perspective, price testing pivotal .6568 prior cycle highs area if sufficient supply is seen here look for another leg lower to test trend support back to .6330 before another attempt to base and make another run towards the .6700 primary upside objective. Note considerable momentum divergence developing this will likely be addressed in a move to test range support back to .6400 before a final attempt to make the .6700 primary upside objective 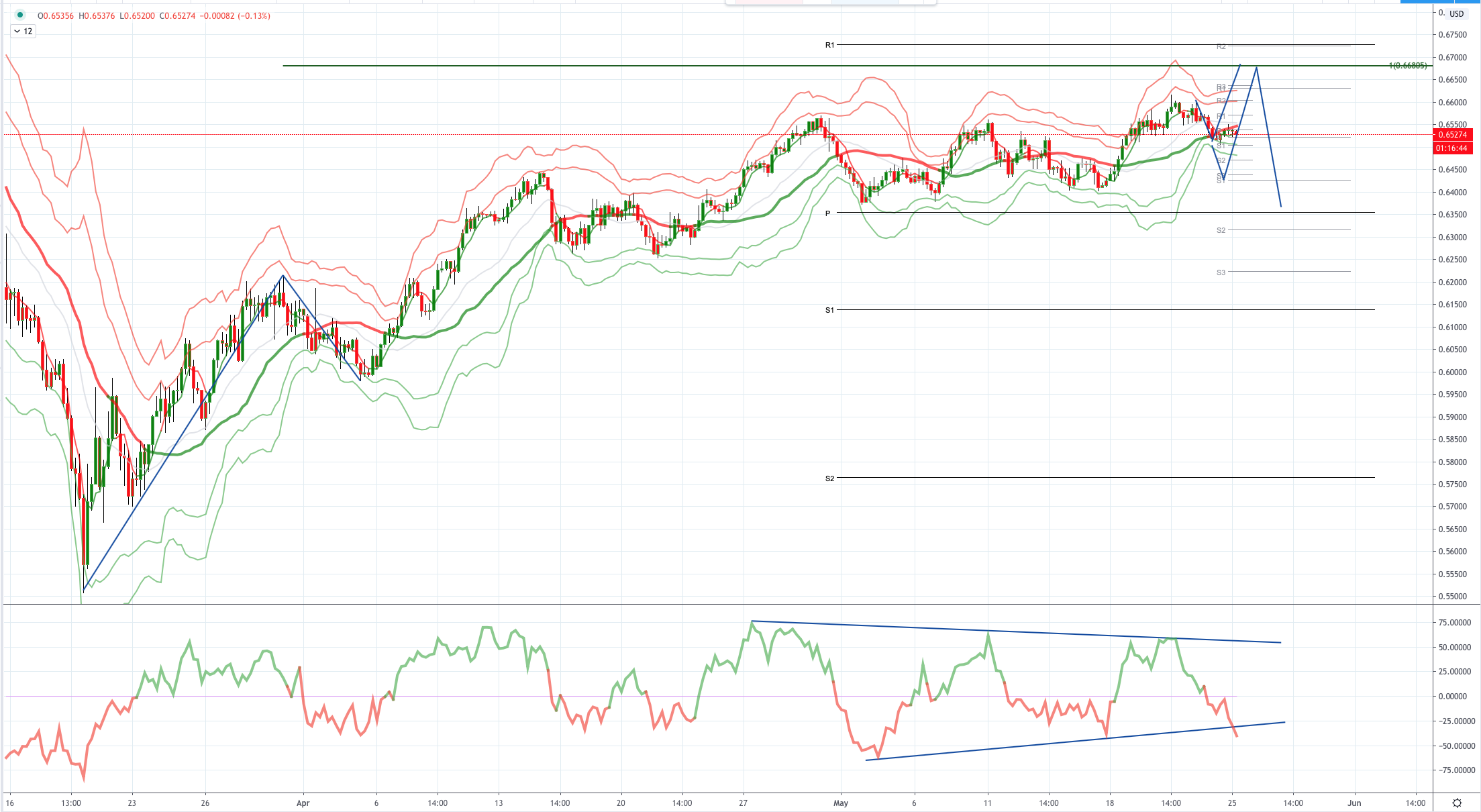 High Risk Warning: CFDs are complex instruments and come with a high risk of losing money rapidly due to leverage. 73% and 65% of retail investor accounts lose money when trading CFDs with Tickmill UK Ltd and Tickmill Europe Ltd respectively. You should consider whether you understand how CFDs work and whether you can afford to take the high risk of losing your money.
Written by Patrick Munnelly
Patrick has been involved in the financial markets for well over a decade as a self-educated professional trader and money manager. Flitting between the roles of market commentator, analyst and mentor, Patrick has improved the technical skills and psychological stance of literally hundreds of traders – coaching them to become savvy market operators!
Previous Post

Chart of the Day USDSGD