“Rough Pressure” Backfires for the Left in the US

Rough pressure backfires for the left in the US. The information, as they say, from the third party about Trump’s pressure on Zelensky in the investigation of Biden’s dark affairs in Ukraine, culminated in the formal inquiry of impeachment by the Democrats. Who, as it turned out, did not even bother to examine the underlying evidence.

In the end, the Democrats earned significant reputation damage, unwittingly "testifying against themselves."

The situation becomes even more dramatic thanks to the fact that according to the report of the inspector general of intelligence community, the complaint of the whistleblower was biased in favor of rival Trump. An informant's lawyer, Andrew Bakaj, worked for Schumer and Clinton in 2001, according to The Federalist.

As Pelosi expected, unfortunately, the Democrats charged Trump’s electorate with even more confidence that Trump’s version of Witch Hunt is absolutely true. As a vivid confirmation, the election campaign of the "Great Old Party", as the Republicans are called, raised a record $ 5 million from voters in 24 hours, stating a wave of widespread public support for Trump. In all 50 states! Below is the corresponding tweet from the head of the election campaign of Trump Brad Parscale: 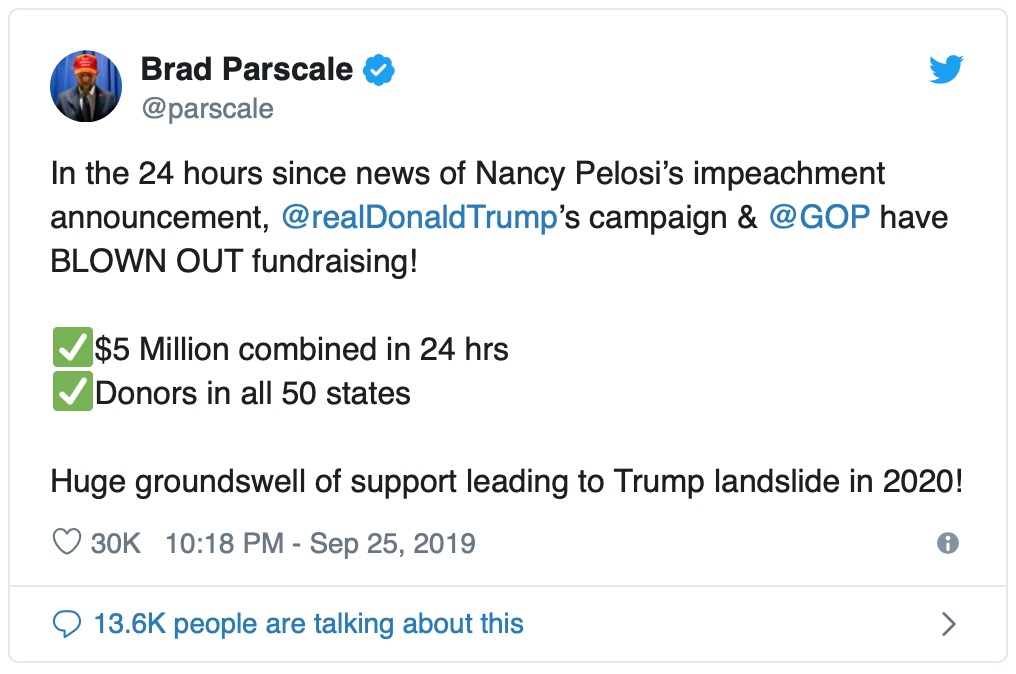 The Democrats' blatant screw-up, which allows an average joe in the US to draw very disadvantageous conclusions for the left, overshadows Trump's just criticism, allowing all attention to be turned to the “circus” of the competitors.

After Pelosi succumbed to the pressure of her colleagues and set in motion the impeachment procedure, which later turned out to be baseless, Trump ironically remarked to reporters that “she is no longer the speaker of the House”.