Inflation in the Eurozone slowed to 1.0% in August, the Bureau of Statistics said in a preliminary report on Friday. In July, the broad CPI grew by 1.0% in annual terms, however, given the fall in market inflation expectations due to steep rally in bonds market, this shifts the balance of risks towards deflation, which requires countermeasures such as QE and deposit rate cut.

Core inflation, which excludes food and fuel, remained at 0.9%, in line with expectations.

Consumer inflation has fallen to its lowest level since November 2016, undermining years of unprecedented monetary stimulus.

The ECB Governing Council will hold the meeting on September 12, at which it is expected to decide to lower the deposit rate (probably to -0.6%) and renew QE in the amount of 40 billion euros per month. The uncertainty of trade wars in terms of possible tariffs for European goods and the slowdown in the economies of the main trading partners (US and China), as well as the transition of the manufacturing sector of Germany to recession, on the one hand, justify the resumption of QE. Nonetheless, the committee’s traditional hawks, such as Lautenschlager, Weidmann, and Knot, spoke in favour of using emergency measures as a response to the concrete threat - recession. Acting in response to the growth of uncertainty, in the absence of large risks of deflation, according to officials, is inappropriate.

It should be noted that the leading economic indicators - the business climate and confidence unexpectedly strengthened in August: 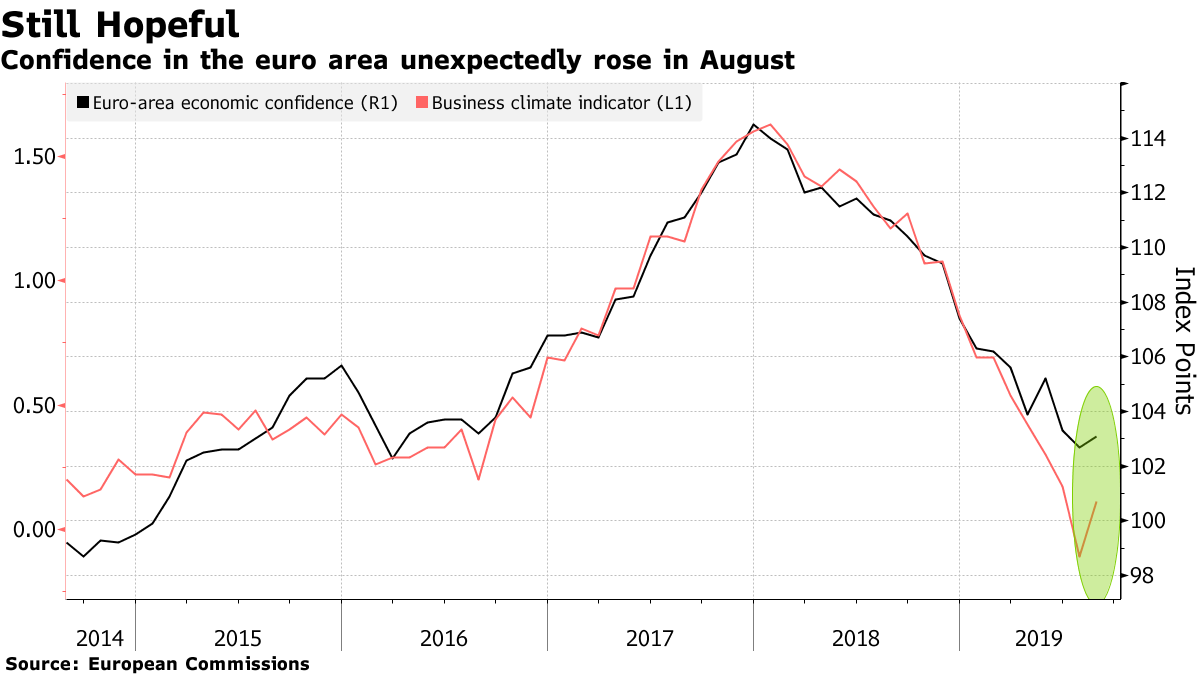 However, the common currency turned a deaf ear to their critics, largely discounting the soft data too.

The problem with the ECB is that inflation has chronically lagged behind its target value since 2013, despite the long economic upswing that generated 10 million new jobs. This expansion should theoretically accelerate inflation to the acceptable level, but this was hindered by a number of factors, such as the hidden weakness of the labour market, the growing level of services in the economy, declining productivity and the aging population. An additional difficulty was the growth of economic challenges from abroad, such as the trade war, Brexit, the slowdown of the Chinese economy, against which, of course, monetary policy is ineffective.

The market agrees, that the most what new QE can do is to maintain positive consumer and corporate moods as well as to extend soft refinancing conditions.