30-year US Treasury bond yield posted new anti-record, falling to 1.907% on Wednesday. The move was not preceded by either economic or political shocks, and the breakthrough occurred in the asset that takes almost 8% of the most liquid market in the world.

It may seem that the change in yield from the beginning of 2019 from 2.85% to 1.9% is not significant (and why we need to invest in an asset with a falling rate?), however, due to the biggest duration (at which the price is the most sensitive to the change in interest rate), the 30-year Treasury bonds turned out to be one of the most profitable assets in the world, yielding 24.29% since the beginning of the year:

Isn’t it a bubble?

Although Treasury bonds with shorter maturities also felt high demand (10-year yields declined to 1.444% in the moment), the most aggressive bids were at the far end of the yield curve. Trading volume amounted to 140% of the norm.

And of course, how without another recession indicator? The yield on 30-year bond fell below the average dividend yield of the S&P 500 (1.98%). As you probably guessed, this happened the first time since 2009: 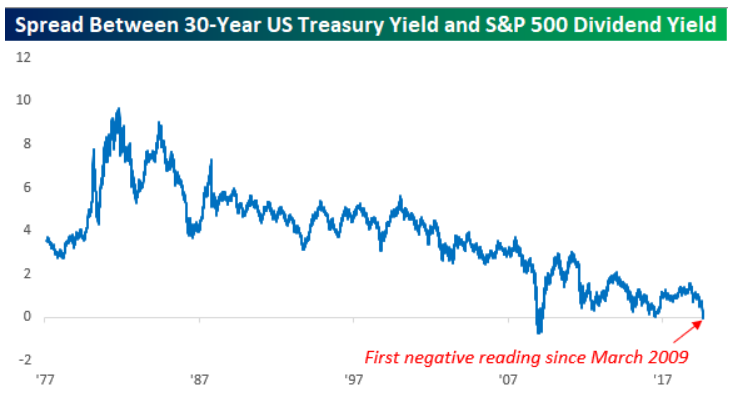 Actually, you can also notice that in the long run, the trend is downward - investors have been consistently agreeing for a lower yield in bonds (thus, reducing spread), realising that the era of high rates is past due to a slowdown in GDP growth (falling productivity), an increase in risk aversion and expectations of unlimited QE during next recession. In general, the sharp fall of the spread into the negative area is consistent with the idea that these three factors (or respective concerns about them) have simply intensified. That is, this is more likely not an indicator, but simply a concomitant phenomenon.

A striking example of the realisation that ultra-low rates are a new long-term reality is Stephen Mnuchin's comment that the Treasury is seriously considering the possibility of starting to issue 50-year and 100-year bonds.