Will EURUSD Remain Below 1.10 Level?

A spate of bullish remarks from some members of the ECB Governing Council (Knott, Weidmann, Lautenschlager) last week about negative implications of the early QE restart in September did not offer solid support the European currency. After a period of wavering near 1.11 mark, EURUSD broke the 1.10 level on Friday and pared down rebound on Monday amid escalation of the US-China trade conflict (Sunday tariffs), political uncertainty in Italy, and signs of a growing recession in the manufacturing sector of the Eurozone. However, the lack of a direct catalyst for decline is more likely to speak of the technical move, i.e., euro bears can easily retract their bid if some strong positive fundamental catalyst appears.

The European currency fell 0.6% against the dollar on Friday, touching the lowest level in more than two years. YTD euro losses have reached about 4.2%. The sales impulse was felt on all major pairs that include euro, which lost the battle even to mired in political problems Pound. Of course, this drew Trump’s attention, who again complained about the Fed's too tight lending policy, pointing to an increase in the export advantage and the competitiveness of Eurozone production due to a “falling like crazy” euro. The president’s verbal intervention could spur only mild dollar sell-off which was then reversed. Some “one-time” factors, such as the celebration of Labor Day in the United States on Monday and the end of the summer season could also open door for occasional increase in the Euro sales.

Data on consumer inflation in the Eurozone published on Friday showed that the consumer inflation rose by 1.0%, in line with expectations. The core inflation rate was also in line with forecasts, leaving Euro without crucial negative surprise in macro statistics, that could justify its decline. Retail sales in Germany grew by 4.4% in July on an annualised basis, indicating that consumption remains relatively insulated from negative developments in the external economy. The positive impression of retail sales was spoiled by inflation data in Germany, which showed a decrease from 1.5% to 1.4% in August.

In the US, last week was rich in data on capital expenditures, which, despite the general positive impression, hid the devil in detail. Excluding the volatile component of civil aviation, basic orders for capital goods fell by 0.3% in annual terms, which happened in the first time in several years. Markit's manufacturing PMI dived into contraction zone for the first time since September 2009. Bill Dudley, head of the New York Federal Reserve, suggested “bird's eye view” for the Fed’s policy, namely, highlighting a positive feedback loop, where Trump will respond by escalating the trade conflict for each Fed rate cut, requiring the Fed to cut more aggressively: 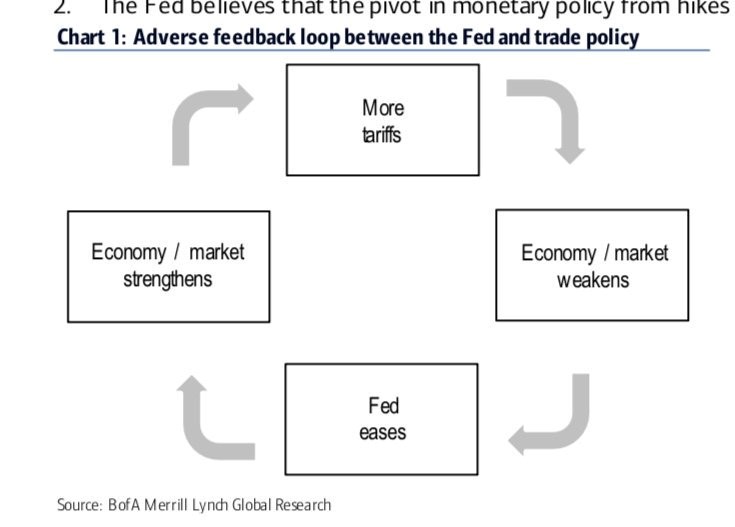 So, Trump in his own way could solve the issue of “disobedient Fed” and his attacks are unlikely to stop in the near future. This possibility limits long-term decline in EURUSD, because of dormant chances for more-than-expected Fed rate cuts. Within two weeks, that is, before the ECB meeting on September 12, the pair is likely to be able to test the lower limit of the range 1.09-1.10 and a possible reason for this would be the US labour statistics, particularly wages data which is due on Friday.