Benchmark WTI crude prices have depreciated this week, falling nearly $5 on rising US inventory levels as well as the resurfacing of concerns about US-Sino relations.

Speaking on the side-lines of the UN general assembly, US Secretary of State Mike Pompeo told the audience that the US had decided to apply sanction to specific Chinese entities over their dealings with Iran, specifically with oil imports from the country. Pompeo also said that the US would now work harder to elucidate on the dangers of working with the Iranian Revolutionary Guard Corps.

These comments from Pompeo follow comments made by Chinese State Councillor and Foreign Minister Wang Yi in New York this week over the country’s trade war demands. Chinese officials said they want to see the US “remove all unreasonable restrictions”. Commenting on the ongoing trade talks, Wang said he was hopeful they would “produce a positive outcome”

Wang continued, saying: “China-U.S. relations today have once again come to a cross roads… “While China opens wider to the U.S. and the rest of the world, we expect the U.S. to do the same to China and remove all unreasonable restrictions… “In a word, China’s efforts and achievements of reform and opening up in the past several decades have been widely recognized. They should not be deliberately ignored or denied.”

Speaking further, Wang noted: “The trade frictions between China and the U.S. in the last year have inflicted losses on both countries, losses that should not have happened,” adding that both sides should “explore new areas of cooperation.”

While Wang’s comments were mostly positive, the demand for the US to remove tariffs is causing concern given that this one of the major flashpoints which lead to the break down of talks last time. Furthermore, with the US set to impose sanctions on Chinese entities for dealing with Iran, the market is concerned that this will jeopardise relations ahead of the scheduled talks.

Additionally, the US comments regarding the “horrific campaign of repression” taking place in Xinjiang against Muslim minorities is also feared to sit uneasily with China. China has often warned the US from meddling in domestic issues and the US Deputy Secretary of State compelling the international community to push for an end to rights abuse in China might be taken negatively.

Away from the headlines around US and China. WTI has also come under pressure this week from reports of a further build in US inventory levels. The EIA reported a 2.4 million barrel increase last week, surpassing expectations for a 250,000 barrel decline. The report also noted a rise in domestic crude production in the US, also bearish for prices. US crude output increased by 100,000 barrels per day last week increasing fears over imbalances in the market.

WTI Crude (Bullish above $55, bearish below)

WTI From a technical and trade perspective. Price is moving back towards the yearly pivot at the $55 mark which will be a defining area. If price works through bids at the level and moves lower, I will be monitoring a retest of the pivot from beneath to position for a break lower. Worth noting that longer term VWAP has gone negative here indicating a broader shift at play. On the other hand, if we see reversal signals as price moves down to the pivot, this could set up a nice long opportunity for another move higher. 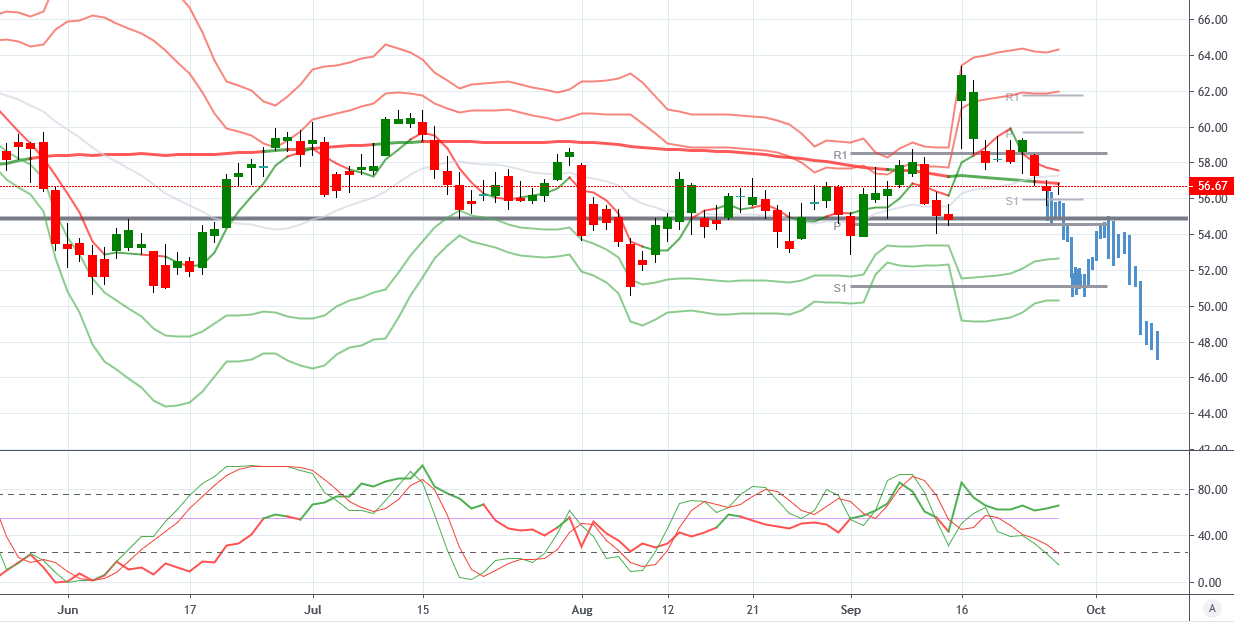 High Risk Warning: CFDs are complex instruments and come with a high risk of losing money rapidly due to leverage. 70% and 66% of retail investor accounts lose money when trading CFDs with Tickmill UK Ltd and Tickmill Europe Ltd respectively. You should consider whether you understand how CFDs work and whether you can afford to take the high risk of losing your money.
Tagged in: #china, #trump, #wti
Written by Patrick Munnelly
Patrick has been involved in the financial markets for well over a decade as a self-educated professional trader and money manager. Flitting between the roles of market commentator, analyst and mentor, Patrick has improved the technical skills and psychological stance of literally hundreds of traders – coaching them to become savvy market operators!
Previous Post