English
Deutsch
中文
Русский
Español
العربية
Polski
ภาษาไทย
Tiếng Việt
Portuguese
REAL TIME NEWS
Loading...
The dollar is shrugging off a wave of shorts that led to decline of the US currency index from 94.00 to 93.50 area on Tuesday. The decline has been co...
Canadian CPI Up Next The key data focus heading into today’s US session is the release of September’s Canadian CPI. On the back of the weaker-than-fo...
Revamping Old Patterns In terms of technical setups, the best advice is always to keep things simple. There are plenty of complicated, esoteric chart...
CPI Stalls, But Still Above Target The latest set of UK inflation data released today showed that CPI softened somewhat over the last month. Followin...
Citi European Open We saw markets hold mostly steady in a morning marked by Chinese data. USD and other G10 currencies held mostly steady, while AUD...
USDJPY due for a potential short term pullback Type Bearish Reversal Resistance: 115.567 Support: 113.798 Pivot: 114.581 Preference: USDJPY is ...
DAX is at a Pivot, potential for bounce Type: Bullish Bounce Resistance: 15615.04 Support: 15375.94 Pivot: 15450.25 Preference: DAX have recent...
Daily Market Outlook, October 20th, 2021 Overnight Headlines Biden Tells Democrats Package Of Up To $1.9T Should Be Target Progressives See Budget D...
After reassessment of the pace of policy tightening by major central banks on Monday, which led to a sharp rise in short-term bond yields (German 2-ye...
AUD In Demand The Australian Dollar has been well bid across the European today following the release of the bank’s latest meeting minutes overnight....
FTSE At Key Level The FTSE is now trading back around its highest levels of the year. Following a frustrating sideways period over the last six month...
Better Start For Equities It’s been a mostly better start for global equities benchmarks this week as the pullback in the US Dollar allows asset mark...
Citi European Open Positivity seemed to mark the Asian morning, which saw USD offered against most currencies. The largest gainers were AUD, NZD and...
Daily Market Outlook, October 19th, 2021 Overnight Headlines US Democrats Battle Over Climate Change Plans In $3.5 Trillion Bill Manchin Casts Doubt...
Despite the weak report from U. Michigan on Friday and unsettling economic update from China on GDP and production on Monday, markets are busy pricin...
Type: Bearish Reversal Resistance: 15731.44 Support: 15446.18 Pivot: 15606.47 Preference: Price have approached our Pivot at 15606.47 which is a...
Type: Bearish Reversal Resistance: 115.814 Support: 112.088 Pivot: 114.61 Preference: Price has been consolidating in ascending channel. We spot...
In this Weekly Market Outlook 18-10-21, our analyst looks into the trading week ahead, possible market moving data releases across the globe and the t...
Daily Market Outlook, October 18th, 2021 Overnight Headlines US Democrats Face A Deadline On Benefits And Climate Bill Consensus Senator Johnson Hop...
The Russian ruble broke the key support at the level of 71.50 and dropped, targeting the support at the level of 70.50. So far, the currency pair seem...
Fund Analysis Market Analysis Market Insight

The gold market has seen fresh demand across recent sessions as investor attention shifts away from the post-lockdown recovery and onto emerging risk factors. Last week, relations between the US and China deteriorated further in the face of China’s newly approved National Security Law for Hong Kong. The law, which mark the first time that China has overridden Hong Kong’s constitution to install a Chinese law into the penal code, was met with great opposition by the US. Trump warned China not to press ahead with the law and, following its approval last week, announced fresh measures against the country on Friday. The new measures include the barring of “certain foreign nationals from china” as well as the elimination of preferential customs treatment for Hong Kong (which the US now no longer recognises as an autonomous region. Markets now wait to see if there is any reaction from China.

Away from hostilities with China, hostilities on the ground in the US have been growing increasingly concerning. Nationwide protests in the wake of the killing of an unarmed black man by a police officer last week have spiralled into six nights of rioting leading to some cities being placed under curfew and, in Los Angeles, the national guard being deployed for the first time since 1992. The situation has become increasingly tense and shows no signs of abating despite thousands of arrests being made and appeals for calm across the political and social spectrum.

The silver market has also been well supported across recent trading. The improvement in the equities landscape over the last two weeks and seen silver rally by around four dollars with price back up to its highest levels since February. Despite the US action against China, traders were seemingly preparing for more aggressive measures as equities have continued to rally which, along with weakness in the US Dollar has helped keep silver well bid here.

Gold prices have rebounded firmly off the $1703.10 level tested last week and are now back above the monthly pivot and retesting the $1747.15 level. While lower support remains in place, and with VWAP still positive, a further break higher is seen with the $1790.76 level the next upside target. 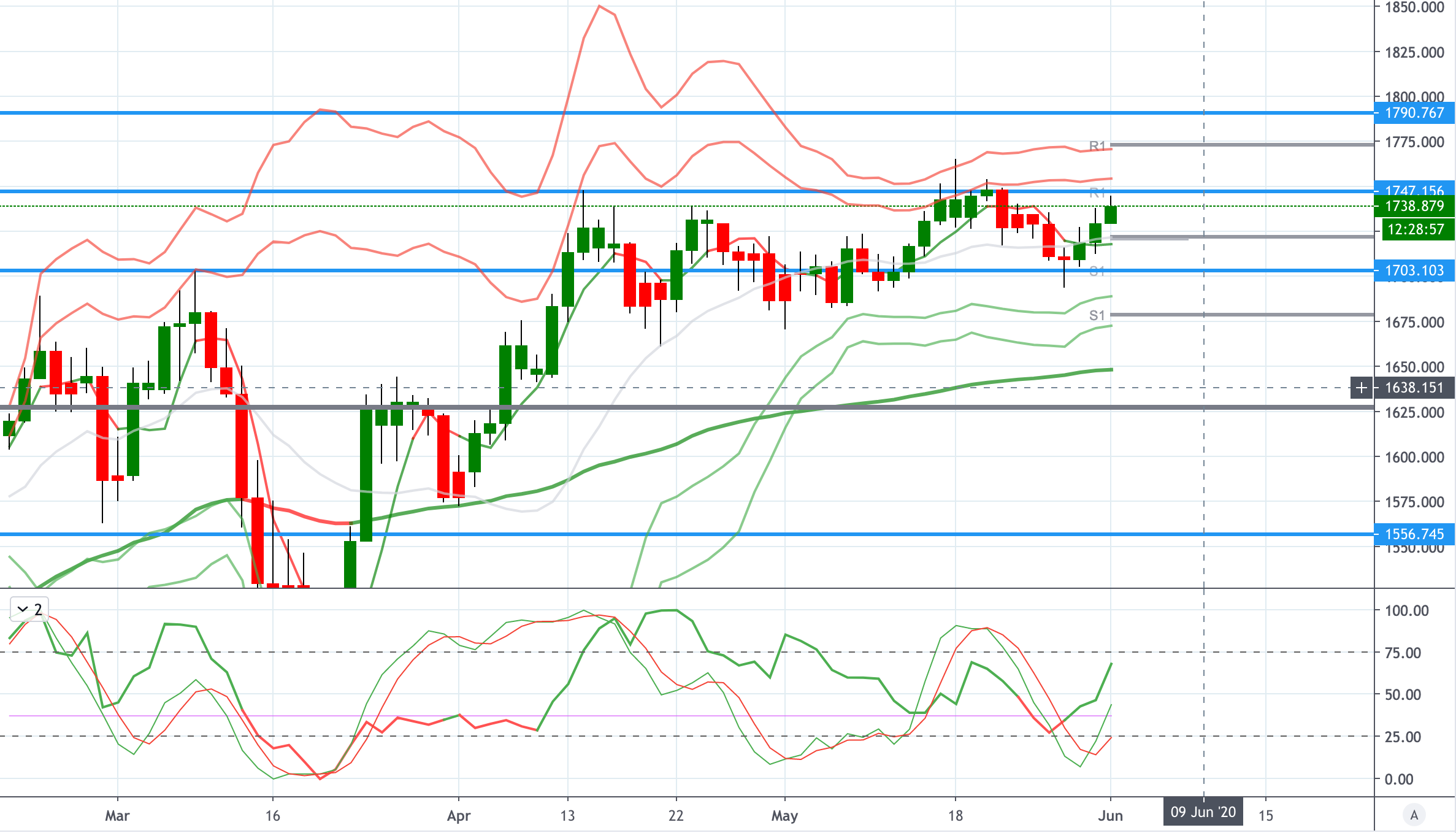 Silver prices are now on course to complete the symmetry projection move into $18.7870 following a further breakout above the yearly pivot at $17.2897 which stalled the rally last week. While this level remains supportive, the enar term bias continued to be bullish. 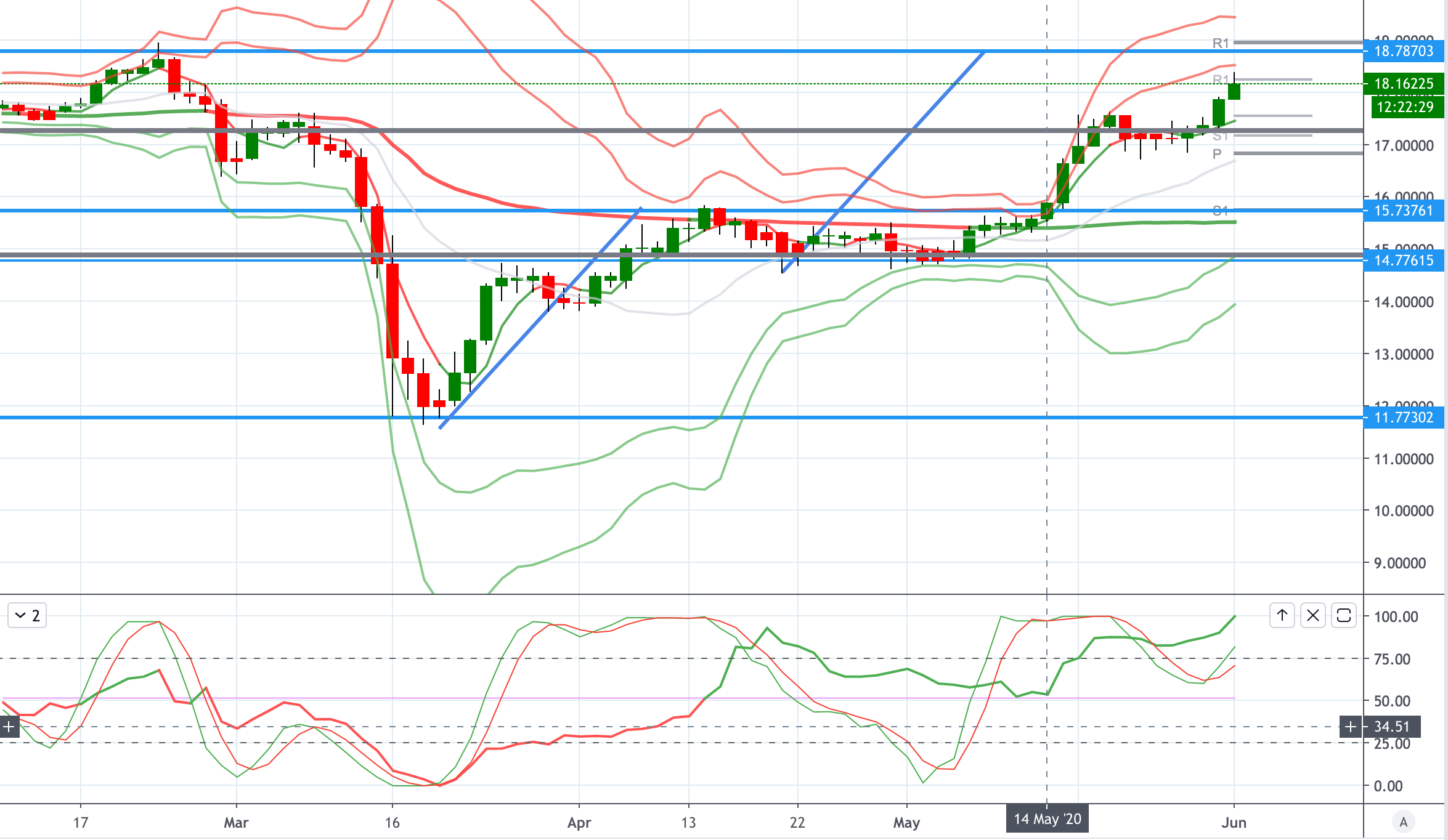 High Risk Warning: CFDs are complex instruments and come with a high risk of losing money rapidly due to leverage. 71% and 61% of retail investor accounts lose money when trading CFDs with Tickmill UK Ltd and Tickmill Europe Ltd respectively. You should consider whether you understand how CFDs work and whether you can afford to take the high risk of losing your money.
Tagged in: #china, #covid_19, #xau, #silver, #trump
Written by Patrick Munnelly
Patrick has been involved in the financial markets for well over a decade as a self-educated professional trader and money manager. Flitting between the roles of market commentator, analyst and mentor, Patrick has improved the technical skills and psychological stance of literally hundreds of traders – coaching them to become savvy market operators!
Previous Post